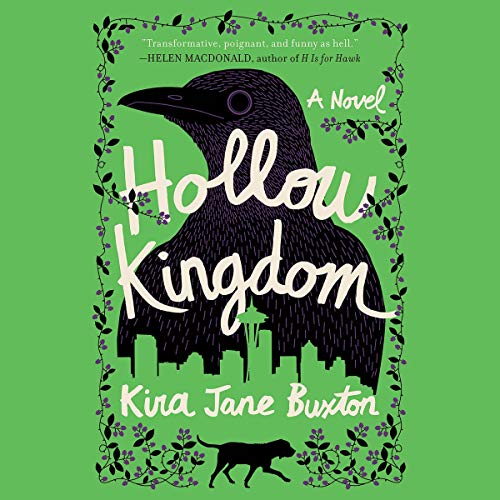 One pet crow fights to save humanity from an apocalypse in this uniquely hilarious debut from a genre-bending literary author.

S.T., a domesticated crow, is a bird of simple pleasures: hanging out with his owner Big Jim, trading insults with Seattle's wild crows (those idiots), and enjoying the finest food humankind has to offer: Cheetos®.

Then Big Jim's eyeball falls out of his head, and S.T. starts to feel like something isn't quite right. His most tried-and-true remedies - from beak-delivered beer to the slobbering affection of Big Jim's loyal but dim-witted dog, Dennis - fail to cure Big Jim's debilitating malady. S.T. is left with no choice but to abandon his old life and venture out into a wild and frightening new world with his trusty steed Dennis, where he discovers that the neighbors are devouring each other and the local wildlife is abuzz with rumors of dangerous new predators roaming Seattle. Humanity's extinction has seemingly arrived, and the only one determined to save it is a foul-mouthed crow whose knowledge of the world around him comes from his TV-watching education.

Hollow Kingdom is a humorous, big-hearted, and boundlessly beautiful romp through the apocalypse and the world that comes after, where even a cowardly crow can become a hero.

"I love this book so much! I wanted to set it on fire while hugging it. I wanted to hasten the apocalypse just to see how my own pets fare in a more humane world without humans. Kira Jane Buxton's voice is fresh, like a newly dug grave, but so joyful and honest you'll laugh out loud, and then check to make sure you haven't lost an eyeball. Hollow Kingdom is a wildly original debut and a paean to my favorite city." (Jamie Ford, New York Times best-selling author of Hotel on the Corner of Bitter and Sweet)

"A plucky hero, a boisterous tale, startling prose and eerie events combine for a thoroughly enjoyable account of the end of the world as we know it. The Secret Life of Pets meets The Walking Dead." (Karen Joy Fowler, PEN/Faulkner Award-winning author of We Are All Completely Beside Ourselves)

"Hollow Kingdom offers a bird's-eye view of the apocalypse we all want and need-especially when the bird in question is a plucky, Cheeto-loving domesticated crow.... With infinite heart and humor, Kira Jane Buxton's fine-feathered narrator guides us through richly imagined animal realms while braving the terrifying collapse of the human world. A dazzling, wholly original debut, revealing the great paradox of humanity's fatal flaws and resilient spirit." (Mona Awad, author of 13 Ways of Looking at a Fat Girl and Bunny)

"If you've ever thought that humans were the ones in charge, Kira Jane Buxton's groundbreaking novel will have you thinking otherwise. Full of unforgettable humor, insight and beauty, Hollow Kingdom enriches our human experience by inhabiting the minds (and bellies!) of our non-human animal companions and reminding us that we're not alone here on this earth." (Ruth Ozeki, nationally best-selling author of A Tale for the Time Being)

"Hollow Kingdom is a nature book for our own age, an exuberant, glittering, hard-hitting mashup of Dawn of the Dead and The Incredible Journey. It's an adventure lit by strange myths, brand-names, television and smartphone screens, a fable with teeth and claws about animals making new lives amongst the ruins of humanity. It's transformative, poignant, and funny as hell. S.T. the irrepressible, cursing crow is my new favourite apocalyptic hero." (Helen Macdonald, New York Times best-selling author of H Is for Hawk)

If Christopher Moore re-wrote Jonathan Livingston Seagull during a zombie apocalypse, it still wouldn’t be this good! Fun and funny, it’s irreverent beauty is a joy to behold and the narration is spot on.

Very funny! New twist to a standby theme. It really feels like exactly what animals would be thinking if faced with humans suddenly lurching about as zombies. A bit profane if that bothers you, but used wisely. Enjoying the heck out of the wacky tale--especially the narration.

I wasn’t too sure about this book when I first started it, but I ended up absolutely loving it. It’s entertaining, gripping, and touching. The contrast between protagonist ST’s crass voice and the poignant, beautiful musings of nature is really cool. I also loved the narrator’s performance.

Buxton is a star

I lived every minute of this book, even when it ripped my heart out. Buxton's writing is beautiful and detailed without being overly done. ST and Dennis are my new favorite characters

I live zombie stories. This book tho is not really about the zombies but a story of the survivors. the domestics, the wild, the trees...big blue without humans. I just loved this new take! The book is hilarious, heartwarming, at times so sad I didn't want to continue but I'm glad I did.

A crow's eye view of the Apocalypse

Hard to believe this is the author's first book. It was riveting from start to finish. A very different take on the whole zombie apocalypse genre. I enjoyed this narratort so much, I listened to the whole thing over when I was done!

The best part of this book is the humor. Otherwise, I found myself impatient with the story telling and lack of arc.

A truly unique take on an end of the world story. Absolutely hysterical moments and a few heartbreaking ones.

absolutely hilarious yet a deeper look into human connection through the eyes of a crow.

Weird. Sad. Difficult to hold my attention. Could not wait to move on to another book!

The book is perfect for what it tries to be: An action-packed motion picture style 12+ story with a quirky narrator to top it off. It's just not for me. I can concentrate on this kind of story for the lenght of a feature film, but not for 10 hours. Too much irrelevant action.