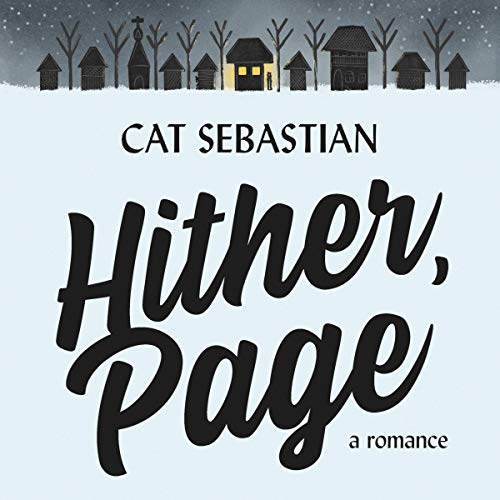 A jaded spy and a shell-shocked country doctor team up to solve a murder in postwar England.

James Sommers returned from the war with his nerves in tatters. All he wants is to retreat to the quiet village of his childhood and enjoy the boring, predictable life of a country doctor. The last thing in the world he needs is a handsome stranger who seems to be mixed up with the first violent death the village has seen in years. It certainly doesn't help that this stranger is the first person James has wanted to touch since before the war.

The war may be over for the rest of the world, but Leo Page is still busy doing the dirty work for one of the more disreputable branches of the intelligence service. When his boss orders him to cover up a murder, Leo isn't expecting to be sent to a sleepy village. After a week of helping old ladies wind balls of yarn and flirting with a handsome doctor, Leo is in danger of forgetting what he really is and why he's there. He's in danger of feeling things he has no business feeling. A person who burns his identity after every job can't put down roots.

As he starts to untangle the mess of secrets and lies that lurk behind the lace curtains of even the most peaceful-seeming of villages, Leo realizes that the truths he's about to uncover will affect his future and that of the man he's growing to care about.

This authentic English mystery, reminiscent of the work of Dame Agatha Christie, is brought to life with an outstanding performance by the very talented Joel Leslie. The mystery was complex, the cast of characters interesting and varied, and the voices so unique I was completely swept away. In fact, I was so caught up in the story and the ambiance of post-War England that I half expected an appearance by Miss Jane Marple.

This mystery stumped me, and that doesn’t happen often. I also grew very close to both MCs as the story progressed and rooted for them to find a measure of peace and, of course, to find each other. My heart broke for James, a country doctor who couldn’t stand the sight of blood. The war took its toll on this young man and by the end of the story, all I wanted was for someone (like Leo) to share his burdens and warm his heart (and his bed).

Leo Page, the other MC, was, in his own way, equally emotionally damaged. Leo is a spy, i.e., he works for the intelligence service and was sent to, ostensibly, solve a murder but, in reality, his job was to cover it up. He doesn’t expect to fall in love, however, and the attraction between he and James grows throughout the story.

Joel Leslie’s voices (and he has many – both male and female) formed a solid base for my enjoyment of this mystery, without a doubt. I felt as if I were sitting in front of an old-fashioned radio broadcast (with better clarity of sound, of course) as I listened to this “show” that had me on pins and needles as Leo and James puzzled the pieces to this outstanding mystery.

Needless to say, I highly recommend this book to those who enjoy a mystery romance, especially one with the flavor of the great mystery authors of the early twentieth century. This was amazing. Those who want extra value entertainment should definitely pick up the audio version.

This was a great “who done it?” mystery with a twist.
It reminded me a little of the game clue, with multiple suspects and outcomes etc. It was anyone’s guess and everyone had a guess lol.
The characters were fun and creative.
The narration was outstanding. Joel Leslie is certainly one of the most talented voice actors out there!!

I loved it and want more!

At times like these I wonder why I don’t read more historical romances. There’s something about the pacing that’s very comforting and soothing. It’s a nice change from the fast paced stories and lives of today. Even though Hither, Page is set post WWII with all that it entails, listening to this book felt almost like a mini-vacation – and one I’d happily go back to.

James is haunted by his time as a doctor in the war. Patching up one soldier after the next. His mind is fried and he wants nothing more than the pace and quiet a small town has to offer. That is until a dead body is discovered and Leo Page comes to town, turning his life upside down in the process.

Leo is anything from what he seems. Part of a secret organisation he’s travelled the world on one mission or another. Being a spy is all he knows, being alone is all he knows. With no place or family to call his own, he really is the perfect spy. And really, loved ones and roots are only obstacles and dangerous in his line of work. That is until he arrives in this quiet village, where things weren’t always what they seemed – and some things were.

I loved the pacing and setting of this book. The quiet, and not so quiet, sense of place. From the moment I started listening it really grabbed me, even before the characters and plot did. Though it wasn’t long until both Leo and James captivated me on their very own. I loved this book beginning to end and I can’t wait to see what will happen next.

James and Leo were perfect for each other, in that they were what the other needed; a home and peace, understanding. I don’t imagine being gay in that time was ever easy, but they really had something worth fighting for. They knew the value of it, at least in time.

The mystery part was engaging, with plenty pf clues and suspects. It had this Agatha Christie vibe to it, this gentler feeling, with no real sense of urgency or danger. It was more like “let’s figure this out, one step at a time”. I loved it, I want more.

I quite enjoyed listening to Joel Leslie narrating a historical romance again. It’s a good fit for him. He captured and gave the listener this sense of place and transported you back to post war England. He made you walk beside James treating the villagers, his exasperation when his ordinations were ignored, how the sight of blood transported him back to the battlefields. But also plotting and planning with Leo when his mind spun out of control with all the possibilities, looking at the invisible threads. But more than that I loved how he made you feel the connection between James and Leo.

Hither, Page was captivating beginning to end, and I just hope that we’ll see much more of this duo in the future - or past.

A copy of this book was generously provided by the narrator in exchange for an honest review for Love Bytes.

I discovered the book by searching for works by this narrator. I’m not usually a fan of historicals but since I love Joel Leslie’s work I decided to give it a try. Glad I did. The story is great with crisp, clever writing. The mystery is in the best tradition of Dame Agatha Christie. The main characters draw you in and you root for them. Leslie’s performance is, as usual, outstanding. His narration adds so much to the story and I particularly enjoy when I am using whispersync as I have his voices in my head when I reading as opposed to listening. Great book and performance. Highly recommend.

Good story, narration a bit off

Thoroughly enjoyed listening to the book but Joel Leslie's pronouncing of certain words and place names was a trifle hard on the ears. That said, I hope there are more instalments.

Cat Sebastian has created a marvelous addition to the cozy mystery genre - tradition with a twist. Veterans of World War 2 suffering its after effects, two men falling in love, family secrets. It is a pleasure listening to such a well written book with characters having depth and genuine emotion. Good narrator.

Wish I did not get this

Thought it was a cozy mystery…not a book for me I can not get past third chapter.. I should have miss marble investigate it for me..

I loved the mystery, romance, red herrings and all of the great characters in this story!!

Lately, I have had a hard time getting into anything super fluffy or without high stakes, which has been tricky during my annual reading/listening of winter/winter holiday setting books.
So I was scrolling through my Goodreads for inspiration & realized that Hither Page by Cat Sebastian has a cover that appears wintry. And lo' and behold, it's set around Christmas. And there's suspense & mystery & murder! And it's set in England right after the end of WWII, so that almost guarantees that it can't be TOO fluffy. I started it right up & was glad to find within a short while that not only is there all of that, there's a protagonist whose reaction to arriving in an English village at Christmastime is that he wants to get out of there as soon as possible, otherwise, "he was going to have to be jolly, heaven help him."
But in case it might seem a bit TOO dark, what with the additional facet of both characters having been naturally impacted by the war, (which was rather inescapable), the dark is balanced with a good deal of light. There's a lot of humor, and not all of it is gallows' humor, (not that there's anything wrong with that). And it IS a romance, with moments of hurt/comfort and warm fuzzies, even if that takes a backseat at times to the whodunit. There are also odd side characters in a small-town setting for added interest.
I will admit that I had a bit of a hard time remembering names/details for side characters. This small town setting is kind of like one of those house party murder mysteries in which everyone is a suspect one way or another or perhaps a catalyst to someone else deciding to commit the dastardly deed. But I'm terrible with names and character histories in general & if I weren't a binge listener/incurable speed reader, I'd learn to take notes for just about everything I read. So it's entirely possible that other people won't have so much trouble.
I really enjoyed the audio narration done by Joel Leslie. He's hit or miss for me, and even when I enjoy his narration, there's usually some little aspect that's off, (like his tendency to make anyone over the age of 50 sound positively ancient). But in the case of this book, I really don't have a single caveat to how much I enjoyed it. I absolutely plan on sticking to audio when I hit up the next book.

I thoroughly enjoyed this audio. The mystery was subtle and really, took a backseat to the characters and setting and I didn't mind one bit. The characters were engaging and I enjoyed them all, especially as brought to life by Joel Leslie. The narration was excellent. I immediately bought book 2 and can't wait to start it. This will go on my re-listen list.

All fans of Agatha Christie stories that ever wanted a queer twist will love this. This is charmingly old-fashioned, but the emotional distress of the characters is real. The scars the war has left on people, the feel of oppression in the post war society-. a bunch of quirky people, a few bodies, many a suspect and a clever plot twist. I had a blast and u will too!!!! The vocal talent of Joel Leslie bring the story to a vivid and colorful life.