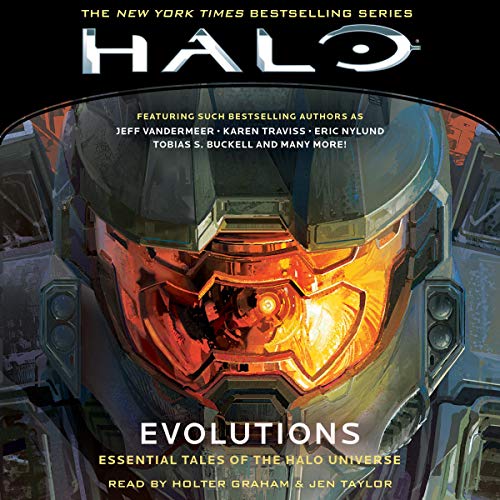 When humanity expanded beyond the safety of Earth to new stars and horizons, it never dreamed what dangers would be encounter there. When the theocratic alien juggernaut known as the Covenant declared war upon the fragile human empire, millions of lives were lost - but millions of heroes also rose to the challenge. In such a far-reaching conflict, not many tales of the brave have a chance to become legend.

This collection of 11 stories dives into the depths of the vast Halo universe, not only from the perspective of those who fought and died to save humanity, but also from those who vowed to wipe it out of existence.

As a life long Halo fan I found the "tales" refreshing and exciting. I will be revisiting this book in the future for a second pass. have already recommended it to many and they have nothing but great things to say about it.

one of the stories has a very monotone quick speaking narrator. otherwise this is a must have.

Some stories are amazing, others are not good

Unfortunately, some stories are phenomenal and essential for Halo lore. Others are lackluster at best. I would say about 50/50 split.

That said the ones that are phenomenal make this more than worth buying.

the book is fine, although it does jump here and there. the audio reader miss pronounces alot of words as well as monotone that killed this book.

some audio issues but a good collection of stories

a couple stories had some skipping or cutting out but other wise was good. i enjoyed the listening of a book that would of taken me a year to finish. what was suppose to be a brake from the main halo books was turned into an amazing following of some characters and stories i will never forget.

The stories are rather compelling but my issue is that they are not in chronilogical order. It is hard to get invested or place these stroies in the Halo canon when the stories are given out of chroniogical order. My other issues with the stories is that they pretty much all end abruptly. These short stories are clearly unfinished which in itself is not bad but none of them are really ended well. They trail off without conclusion with a few exceptions.

The performance is decent enough, not the best in the Halo audiobooks but not the worst either. The Halo 2 tie in is probably the worst as Cortana, Master Chief, and the marines all sound far to similar.

This is a good purchase if you like the Halo canon and want more meat, more of a feeling of the overall universe. There are flaws with structure but overall it was enjoyable to listen to. It is also quite long, 15 hours. So it is also a fantastic time sink

I have nothing good to say. It started with a story with potential but then jumped to a bunch of crap. The narrator sounded like he was on drugs. I gave up. I just wasted my money.

This collection of short stories feels essential to the Halo universe. The narration is always spot on and almost every story is a good one.

it was great, definitely a great Cornerstone to the universe, in and out of the books.