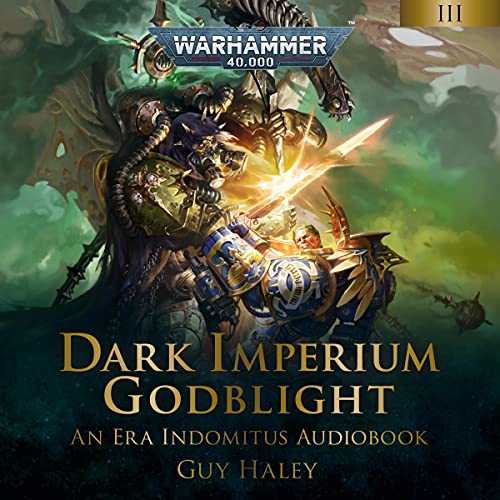 Audiobook 3 of the Dark Imperium trilogy.

The destinies of primarch and Imperial Regent Roboute Guilliman and his traitorous brother Mortarion come together for the climactic battle of the Plague Wars.

Listen to It Because

It's the throwdown you've been waiting for, as Guilliman and Mortarion work out 10,000 years of pent-up resentment in a clash for the ages.

The paths of Roboute Guilliman and his fallen brother Mortarion bring them inexorably together on Iax. Once a jewel of the Imperium, the garden world is dying as the plans of the Lord of Death to use it as a fulcrum to drag the stellar realm of Ultramar into the warp come to deadly fruition.

While Guilliman attempts to prevent the destruction of his kingdom, Mortarion schemes to bring his brother low with the Godblight, a disease created in the Cauldron of Nurgle itself, made with the power to destroy a son of the Emperor.

Primarchs clash on the ravaged landscapes of Iax. The gods go to war and the wider galaxy balances on a knife-edge of destruction. As something powerful stirs in the sea of souls, only one thing is certain – no matter who wins the last great clash of the Plague War, the repercussions of victory will echo through eternity....

Excellent on all accounts. Voice acting, advancement of the lore, how the story is woven. A perfect 40k book

The performance is immersive and on point throughout the entire thing, felt in 40 k

Fell asleep in the story

Lore and heavy foreshadowing is the only reason to read/listen poor discombobulated story. Sad end to trilogy

GW does it again!

Poor Guy had to rewrite his trilogy as a hype piece, and I sincerely hope Dawn of Fire gets better treatment.
That being said, Godblight is... okay. Guy can get a little messy. Transitions between characters and events get jarring, especially at the "climax". Some characters serve as fluff with no clear arc or consequence. Fits well with Watchers of the Throne, and segways to Great Work and Devestation of Baal nicely. John Banks sounds a little subdued and characters aren't as distinct as some other works, but it's a good reading by a talented reader.

Amazing end to this trilogy

The Emperor is not a god but...

it certainly sucks to be Guilliman when you constantly insist that the Emperor isn't a god to a galaxy that overwhelmingly believes he is complete with even the demons of chaos refer to him as such.

The Third in the Series

A solid third book. I highly enjoyed it. Some cool battle scenes that are really brought to life by the reader. If you like Ultramarines or 40k this book is one for you.

I really enjoyed this story.

If the Emperor really is a god, is Roboute Guilliman his greater Desmond?

A worthy end to the trilogy

The lore implications of the finale of this story are mind-boggling to say the least.

Robute has clearly become my favorite Primarch, the author has made him relatable and has me craving more.

fantastic book by Guy Haley! I liked the way the series progressed from Dark Imperium to God light

The metaphysical aspects beeing discussed are very interesting from a lore point of view, but remain mere sidetracks. The story itself offers no suprises and/or memorable characters.