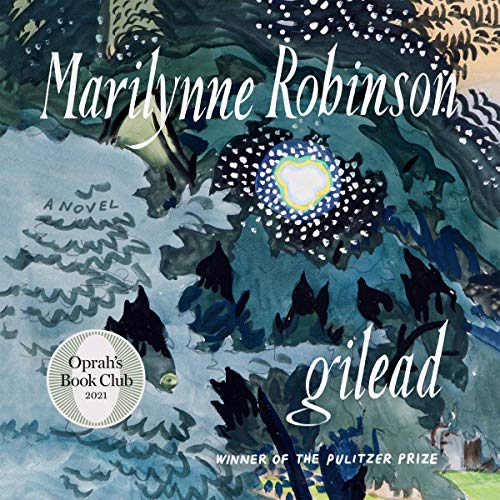 In 1956, toward the end of Reverend John Ames's life, he begins a letter to his young son, an account of himself and his forebears. Ames is the son of an Iowan preacher and the grandson of a minister who, as a young man in Maine, saw a vision of Christ bound in chains and came west to Kansas to fight for abolition: He "preached men into the Civil War", then, at age 50, became a chaplain in the Union Army, losing his right eye in battle. Reverend Ames writes to his son about the tension between his father, an ardent pacifist, and his grandfather, whose pistol and bloody shirts, concealed in an army blanket, may be relics from the fight between the abolitionists and those settlers who wanted to vote Kansas into the union as a slave state. And he tells a story of the sacred bonds between fathers and sons, which are tested in his tender and strained relationship with his namesake, John Ames Boughton, his best friend's wayward son.

This is also the tale of another remarkable vision, not a corporeal vision of God but the vision of life as a wondrously strange creation. It tells how wisdom was forged in Ames's soul during his solitary life, and how history lives through generations, pervasively present even when betrayed and forgotten.

Gilead is the long-hoped-for second novel by one of our finest writers, a hymn of praise and lamentation to the God-haunted existence that Reverend Ames loves passionately, and from which he will soon part.

" Gilead is a beautiful work: demanding, grave, and lucid...Robinson's words have a spiritual force that's very rare in contemporary fiction." ( The New York Times Book Review)
"The long wait has been worth it....Robinson's prose is beautiful, shimmering, and precise....Destined to become her second classic." ( Publishers Weekly)
"[ Gilead] is so serenely beautiful, and written in a prose so gravely measured and thoughtful, that one feels touched with grace just to read it." ( The Washington Post Book World)

"Gilead" is one of the most profound, deeply moving novels of our time. Its portrayal of human nature and existence in a universe pervaded by God would perhaps have seemed natural a century and more ago; today, it is a revelation. More than once, this novel made me weep, something that no book has ever before done. How fortunate, then, that this blessed novel has been blessed with a great reader. His voice, intonation and pace are ideal for the character of John Ames, the story's ostensible narrator. A perfect reading of a perfect novel: what more could one ask of an audible.com offering?

A book for dreaming over

Usually, I gobble books. Not this one. Exquisitely written, it begs the reader to pause, to ponder, to wonder, to marvel. So delicate, like leaves rustling in a light breeze. As the narrator ponders his life, so you cannot help but ponder your own. Here is a book full of spirit, a sermon if you like, without the preaching down to the reader. Instead it is an invitation to think with compassion about oneself, one's failings, one's relationships with God and man. Amazing.

The wonder of retrospect

I feel that I listened to this book two and one half times due to the many rewinds I made in order to hear again the poetic charm of Robinson's use of our marvelous language. Emotions, concerns and recollections are expressed in a manner that I could feel as my own. Perhaps this is in part due to the wonderful narrator whose voice seemed to be perfect for a story cited on the plains of Iowa and Kansas. His voice had a rawness, a lonliness, a solid mid-american character that brought the words alive. I believe that I shall listen to this book again. It felt that good.

In this collection of letters to his young son, the voice of Rev. John Ames, mesmerizes us. To this boy he leaves his last treasures .. the family story, the story of the town Gilead, his observations of life, friendship, society, history, rural life, the nature of love, jealousy, and friendship, the reconciliation of fears and disappointments.. and his steadfast faith in God, and the role that faith plays in Rev. Ame's life. Woven into all this are several amazing tales of adventure, and quite a bit of subtle humor.

The reason for the letter is Rev.Ames's failing health. He wants to leave an account of himself for this son who will never really know him. He is 76 and dying. His son is almost 7 years old. The boy and his mother have been a blessing in his later years, and his deep love for them both is painted in the gratitude he expresses for this gift from God. His hopes and dreams for the boy's future are the most poignant. Without mushy sentimentality, we feel the ache he feels anticipating his absence from the boy's growing up.

This is a wonderful story, beautifully written. Thought provoking and awe inspiring. I've listened to it once.. read it twice.. given it to several friends as gifts. It is a challenging book to read, rich and full of new discoveries with each new reading.

There is,indeed, a balm in Gilead.

Gilead was the selection of the month for our book club and I had a preconceived notion that I would not like it. I can say now that I was wrong. It was a most enjoyable book and Tim Jerome did a wonderful job reading it. He was a very entertaing and believable Reverend John Ames. I would recommend this book.

This is a beautifully written book, and the narrator's voice is so well suited to this work I forgot I wasn't sitting with John Ames listening to his story. There are countless nuggets of wisdom to be mined in this artuflly crafted memoire.

A story filled with truth

This book was much more than a heart warming story, it was a story filled with truth and wisdom. It's about an old man writing both his memoirs and a diary to his only son before he dies about his extraordinary life as a pastor who genuinely loved, not only his "flock" but people in general. Although his father and grandfather were clergy, in the end, he was left with conflicting, confusing examples of right and wrong. Wanting to do the right thing at the end of his life, he wasn't sure what was always right. How does one really love? What does love really mean? In his struggle to find the way, he leads us as well. This book has insight and meaning into life and love. It's a most worthwhile and fun listen.

A meditation on life and family and God. A wonderfully written, touching, charming book. Great narration. Thanks for this.

A nicely written, and narrated novel. The tempo I quite slow, but I found my self interested in the small and big thing In his life. Religion is a big part of the book and can be a bit to much for a godless European. It didn?t bather me to mush.

I found this to be a novel of great depth and discovery. It is quiet and thoughtful and beautiful. It doesn't stuff anything down your throat...just makes your mind work. It could have gone in many directions but chose the true path. What a pleasure to read a novel so thought provoking and unassuming.

Quite a philosophical piece. I thinks it's most enjoyable when read in a calm setting. The reader does a great job bringing the book alive.