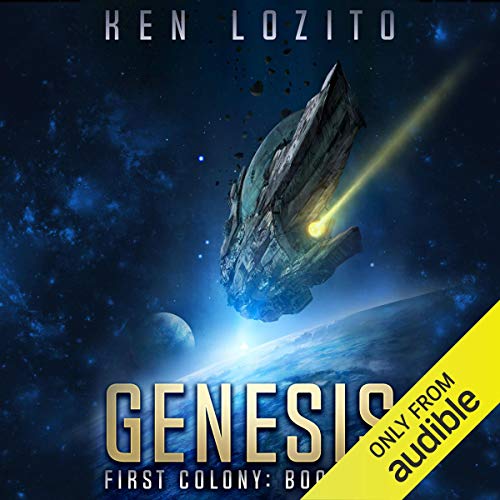 A mission gone wrong. Innocent lives have been lost.

Escaping wrongful imprisonment wasn't something Connor had in mind, but being put into stasis aboard Earth's first interstellar colony ship was something he couldn't have prepared for.

For 300,000 colonists, the new colony brings the promise of a fresh start...a second chance. Connor might be the wrong man for the colony, but he's the right man to see that it survives what's coming.

A new world with new challenges, but the mission has changed.

I've read the first three books, so this reflects the initial trilogy as a whole. From these books I can deduce this: the author must be a Michael Bay fan. It's a story that sets up some flashy scenes, but you really need to pour on the suspension of disbelief to get through weaker parts.

It leans heavily on military culture, which in some parts does quite well. However it starts to fall apart as it increases in scope. I would bet that the author had been through boot camp, but then quickly exited service without ever seeing combat.

The storytelling is... not as grounded. A lot is borrowed from classic tropes and half formed story elements. Like a Michael Bay movie, they're presented in a way that you can still enjoy it, if you don't think about it so much.

Narration is fairly decent. Most of the time he's easy to listen to, but as the action picks up he can have some odd choices of inflection. Character voices are likewise solid with exceptions. (Please no more with the nasal voice.)

It wants to be a mature sci-fi story, but it's not. But if you don't think of it as such and take it for an easy listen, you can get some enjoyment out of it.

Decent Story with a Rookie Mistake

This is a pretty good story over all. The main character is heroic but human, and is surrounded by a cast of interesting, and distinct, supporting characters. I found the story line interesting enough that it kept me involved, and the author introduced several intriguing mysteries about the new world that could end up being central to the plot of future books, but either way, I hope he finds time to address. The gigantic threat looming over the colony, foreshadowed throughout the book, but not revealed until near the end, really sets this series up for a massive, and interesting "David versus Goliath" kind of finale.

The reader was great, had ten or more very distinct voices, including a couple different accents and several pretty decent female voices. He definitely enhanced the experience for me.

There are a few choices the author made with the story line that I thought were questionable (such as when an elite, nanobot enhanced, special forces commando is punched in the stomach by a middle aged female doctor, and it doubles him over in pain . . . as a lifelong martial artist who has been punched in the stomach thousands of times, and has decades of first hand knowledge about how little the average untrained person actually knows about throwing punches, that just didn't ring true to me), but mostly they are mild enough to let pass.

One decision the author made, however, has the potential to ruin the whole book for some readers, so it needs to be mentioned here. About 1/3 of the way into the story, the author decides to use the main character to give voice to his own personal feelings about religion and faith. The scene has nothing to do with the story, literally plays no role in the plot whatsoever, and serves no purpose other than to alienate half his readership.

Overall, I wasn't annoyed enough to let it overshadow an intriguing and entertaining story, and I will likely continue with the series, but there are a lot of people out there who are tired of having their faith bashed by unbelievers, and might make a different choice.


This is my first try at a book about actually going to another planet and setting up housekeeping, by 3000,000 earthlings. AND I really enjoyed it. But I probably enjoyed it so much because the narrator was awesome. I absolutely loved Connor’s voice and all his snarky, rude, sarcastic and sweet words. I liked Diaz too. He had a perfect Spanish accent. And the girl, (damn I forgot her name) sounded kind of German, and when a young man, Sean, spoke he did sound young.

Connor was a black ops team leader and when a mission went horrible wrong a friend of Connor’s father had Connor drugged and put in stasis for a trip to another galaxy because Will knew that Connor and his team were going to be blamed for millions of people dying on the space station where the battle took place with the Syndicate. So, Connor was in stasis for 200 years and 8 months. Needless to say, Connor had a really hard time believing it when he woke up.

Actually, all the battles were thrilling, especially the one the creatures they called Ryklars, who had like 4 arms and 2 legs and could run 130 miles an hour, all day long. There were other creatures and the description of them all was incredible.

It wasn’t a cliffhanger but it left it open for other books, which I will probably read. I mean, a fleet of “something” is heading their way and I have to know what it is. The fleet could be there in ten months or in ten years, nobody knows.

No romance of any kind and the F-bomb was used 1 time.

As to the narration: Scott Aiello was simply wonderful.

Great start to a series! I will be getting the rest of this one. This is also the first time I have heard this narrator and he is really good. He does a great job of differentiating between the different characters.

this pissed me off

it absolutely infuriates me when an author doesn't write a book they write an introduction to a book then they put a jacket on it and sell it as a book.

I read a lot of series. I don't mind a good series. I absolutely do mind when an author and publisher team up to defraud me by selling me an incomplete book and then Doling out the ending as a series.

I don't have any idea if this would have been a good book or not because it's not a book it's an advertisement for the series.

do not read this book if you are looking for an ending because you're going to have to pay a lot and wait a long time before you get that.

I was listening to this and gave it a good chance, but this was so stupid. You send out an expedition to a new world without any soliders or robots for security, but okay. Then people start dying and still people think it's just part of the same old same old. Plus who has to work that hard to convince people they need an expert in charge whenever they're being picked off, no one that's who. I also don't get why the MC who is supposed to be a spec ops with expert knowledge in so many things isn't more competent. This overly righteous Behavior also gets on my nerve because it does nothing more than shows the writers inexperience whenever it comes to character development. Just think about the personality type of who wants or goes towards that job or being SF, then think about those who go towards Delta. Two different types of a hard bred of people. Delta is a seek and destroy, SF is a team building to simplify it. This MC is more like a QRF in an infantry platoon than anything else not SF or Delta or whatever dark ops bull they have. You want a better representation of that listen to Galaxy's Edge and how they make out the Dark Ops guys vs. the regular people and the Legion.

narrator lilts and emphasises at random, I couldnt even finish. I've listened to dozens of audiobooks on audible and this is really the first time the narrator completely ruined a book for me.

Dude seems to think random spots are very dramatic and other words are suddenly "overpronounced" so you can almost "hear" by his "random" reading that he doesnt understand the story. Or maybe its just sci fi. he tends to overenthusiastically pronounce anything fururistic.

Best book for a nine year-old!

If you like to listen to narrators say things like: “Connor said,” “Ashley said,” “Shawn said,” “Grizzly said,” “Noah said,” “Juan said,” “Diez said,” and so on, this is the book for you. In fact, if you removed these combinations of words from this story, I estimate the audio book would be about 3 hours shorter. So there’s plenty of that kind of stuff to love in this one.

If you also like apparently uninformed, stereotypical, and unrealistic descriptions of military-like activities this is, again, a great source for you.

Finally, if you prefer your sci-fi to be heavy on fiction and very low on the science part, this book will not disappoint on that account either.

This is a great Sci-Fi story and I enjoyed it thoughrly. The narrator did a good job on the main characters but the secondary voices were so silly it became a distraction.

It was a plot that started bad and never got interesting. Could not finish it.

Not a masterpiece but a well written, entertaining series...
I enjoyed listening to it.. thanks ken