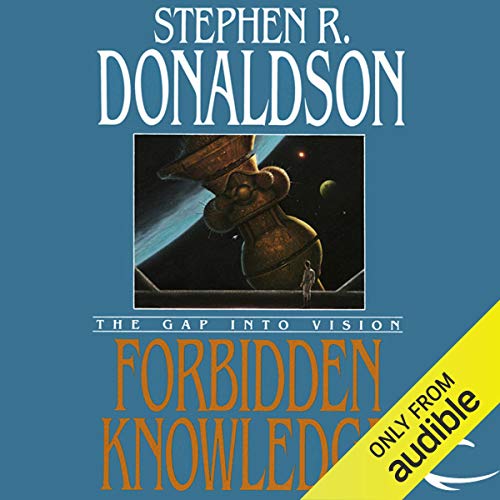 Forbidden Knowledge: The Gap into Vision

Author of The Chronicles of Thomas Covenant, one of the most acclaimed fantasy series of all time, master storyteller Stephen R. Donaldson retums with the second book in his long-awaited new science fiction series - a story about dark passions, perilous alliances, and dubious heroism set in a stunningly imagined future.

Beautiful, brilliant, and dangerous, Morn Hyland is an ex-police officer for the United Mining Companies - and the target of two ruthless, powerful men.

One is the charismatic ore-pirate Nick Succorso, who sees Morn as booty wrested from his vicious rival, Angus Thermopyle. Thermopyle once made the mistake of underestimating Morn and now he's about to pay the ultimate price.

Both men think they can possess her, but Morn is no one's trophy - and no one's pawn.

Meanwhile, within the borders of Forbidden Space, wait the Amnioin, an alien race capable of horrific atrocities.

The Amnion want something unspeakable from humanity - and they will go to unthinkable lengths to get it.

In Forbidden Knowledge, Stephen R. Donaldson spins a galaxywide web of intrigue, deception, and betrayal that tightens with inexorable strength around characters and readers alike.

So far this series has blown me away. So intense!!! I came across this accidentally and I'm glad I did.

Brilliant story, Brilliant narrator science fiction at its best. Stephen really knows how to build a story and use every element to the max.

Nonstop misery and stress is not entertainment

This book is well written, but brought me no value for my credit. The prose is very good, and well edited. However, readers need relaxation from the tension, and hope for the future. This book is just misery, and when it ended abruptly with little resolution I rejoiced, since I wouldn't have to listen to it any more. If you enjoy endless human cruelty, perhaps you would like this book, but I found little in it to recommend. Stephen Donaldson is a very competent author, but perhaps I'm not the right reader, because I have no interest in listening to another chapter of this malevolent torture.

It's all victims and villains now

In the afterword of book 1, author Stephen R. Donaldson commented that he wrote the novella because he wanted to take the classic character triangle of hero, victim, and villain and have his characters switch roles as the story progressed. For book 2, he apparently decided that everyone should be a victim and a villain and to hell with being a hero. This book picks up right after the events of The Real Story and continues to follow all three lead characters: Morn Hyland, Nick Succorso, and Angus Thermopylae. Angus is in custody for a crime he didn't commit and undergoing torture at the hands of the UMCP. Morn has essentially gone from being a captive on Angus's ship to being a captive on Nick's ship but this time she possesses the control for her zone implant, which she must keep secret at all costs. And finally, Nick Succorso shows his true colors and begins to unveil his evil plans for profiting from Morn's situation.

Angus is the scum of the universe and it is ironic that he a prisoner for a crime he didn't commit when he should be executed many times over for the ones that he did. Amazingly he and Morn have developed a strange tie that binds them because they both choose to keep the secret of Morn's zone implant despite the severe hardships they both endure in doing so. It is impossible to feel any sympathy for Angus as his life goes from a torturous hell in a prison cell to one of becoming a tool for his enemy because he deserves all the pain he receives at the hands of the UMCP. However, the evil things they do to him shows that law enforcement is no better then he is when it comes to morality and respecting the free will of others. Angus is as helpless as Morn was aboard his ship and in many ways he does what she did to survive as he clings to internal hopes which harden his resolve.

Speaking of scum, Nick Succorso turns out to be as evil as Angus, but in a slightly different and more charismatic way. Nick heads out to Forbidden Space with every intention of selling Morn to the Amnion, an alien species with a appetite for buying humans so that they can continue their heinous experiments. Nick runs his ship with an iron fist and dominates his crew through fear but always seems to come out on top due to his devious nature. Nick has a reputation as a pirate that is well earned but even his own crew has no idea what he will do next. Morn's presence on the ship is a source of contention for everyone and the entire voyage is one long series of confrontations over it.

Finally there is Morn, who is everyone's victim and the closest thing to a hero that remains in the series. It is hard to hold her up as a shining example of good behavior when she did kill her entire family on her initial voyage into space, but since that was due to Gap Sickness it is possible to feel sympathy for the endless misery she must endure. After the repeated rape that she experienced at the hands of Angus she understandably dreads the touch of any man so she finds herself in a bad spot after being "rescued" by Nick. She knows that Nick expects things to be physical between them so she finds a combination of settings on her zone implant that will allow her to show a fake passion for him when he comes to exact his price.  She struggles at every turn to keep her many secrets from Nick (her gap sickness, murdering her first crew, her zone implant) and she finds that she must slowly reveal these things to stay alive. Of course each secret revealed just gives Nick more control over her and digs the hole even deeper that she is in.

Throughout this book Donaldson finds ways to take interesting sci-fi and alien tech and apply it in such a way as to cause the most misery possible for the three main characters. Morn in particular is subjected to some many unfortunate and evil twists of fate that it is a wonder that she still fights to survive. There is no humor or light subject matter to be found in this book so it makes me question why I continue to be intrigued by the story. Donaldson has a way of making the reader uncomfortable as his universe does all it can to crush the souls of his main characters and yet I can't seem to walk away. I want to know what happens next and have already picked up the next book in the series. Scott Brick does his usual excellent work and his style makes him an excellent narrator for telling this dark story.

Intrigue, action and betrayal. Fantastic book. The characters are so real, you get immersed in the book.

this is my all time favorite science fiction epic. hands down. nothing else I've ever read even comes close to getting the compulsion to keep going and going. such a brutal, violent, smart and complex story. there's nothing else like it.

The whole series of five books is a stone trip. The characterizations and narration are enough to make you wonder why this wasn’t made into a mini series

There are literally no high points in this book. It seems to go out of its way to make the main character suffer. There is a line between gritty and realistic and a miserable slog. This book crosses it. Grade A voice actor though.

The brutal ride keeps on going.

So we continue with the merciless beat down of poor Morn. Now we find that the knight in shining armor ole Capt Nick may not be such a great guy. As the reader will come to find this author does an incredible job at making you love and hate each character. They are all the epitome of anti heroes. This is still some of the grittiest darkest scifi you can find out there, lord knows I have tried and this series will stick with you. You will read about some of the most baddest bad guys and formidable foes in scifi, don't hope for any good guys, there are none. Morn is your closest thing and she is the only one, every one else is either immoral or evil like the people who work at the IRS or Arby's (kidding Arbys has the meats!). Keep the ball rolling on the gap cycle series it is brutal and not for the faint of heart but worth listening to every minute.

As always Mr. Donaldson is able to spin words into a story that is Captivating and enthralling.

If I actually had the book in my hand this would be what is commonly called a page Turner. But as I am listening to this through audible I find myself coming up with excuses to drive my car around and listen to it while I'm driving. Like his Thomas covenant series this story grabs you and doesn't let you go in till the very last page.

Stephen R. Donaldson's "gap cycle" is an amazing sci-fi series with deep and believable characters. I recommend it to anyone who likes serious sci-fi. The voice of the reader manages really well to convey the drama that unfolds and to differentiate in a non-annoying way between the different characters.