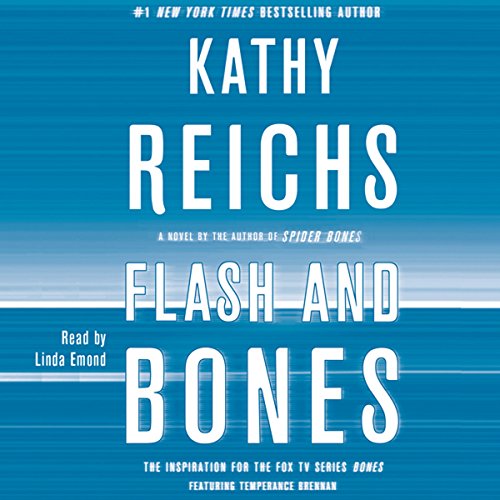 Just as 200,000 fans are pouring into town for Race Week, a body is found in a barrel of asphalt next to the Charlotte Motor Speedway. The next day, a NASCAR crew member comes to Temperance Brennan’s office at the Mecklenburg County Medical Examiner to share a devastating story. Twelve years earlier, Wayne Gamble’s sister, Cindi, then a high-school senior and aspiring racer, disappeared along with her boyfriend, Cale Lovette. Lovette kept company with a group of right-wing extremists known as the Patriot Posse. Could the body be Cindi’s? Or Cale’s?

At the time of their disappearance, the FBI joined the investigation, only to terminate it weeks later. Was there a cover-up? As Tempe juggles multiple theories, the discovery of a strange, deadly substance in the barrel alongside the body throws everything into question. Then an employee of the Centers for Disease Control and Prevention goes missing during Race Week. Tempe can’t overlook the coincidence. Was this man using his lab chemicals for murder? Or is the explanation even more sinister? What other secrets lurk behind the festive veneer of Race Week?

A turbocharged story of secrets and murder unfolds in this, the 14th thrilling novel in Reichs’s “cleverly plotted and expertly maintained series” (The New York Times Book Review). With the smash hit Bones about to enter its seventh season and in full syndication - and her most recent novel, Spider Bones, an instant New York Times best seller - Kathy Reichs is at the top of her game.

Don't start here if you're new to the series!

I am a hard-core Bones fan, and last summer started reading the books that the series is based on. Her writing style amuses me and I love the mysteries... That said, this was probably the worst book in the series. That doesn't mean it's bad, but there's much less science in the book than normal; I learned more about NASCAR than I did about forensics (Ms. Reichs is a real live forensic anthropologist much like her Temperance Brennan counterpart). I really look forward more to the books set in Canada than the Charlotte, NC settings--I like Detective Andrew Ryan better than "Skinny" Slidell.

That doesn't mean you shouldn't read it if you like a good mystery, but I'd highly recommend some of her earlier books before this one... 206 Bones is spectacular (her first), Cross Bones is a wild ride, and Grave Secrets is wonderful.

If you like the TV show and you haven't read any of her books, start with those, as this one might turn you off the series if you start here, it's totally not up to her normal level. :)

The narrator has voiced other books in the series and does a great job with the southern accents.

Why did I do this?

Would you try another book from Kathy Reichs and/or Linda Emond?

I've loved earlier Kathy Reichs books, but this one didn't do anything for me. It's about 40% plot/action, and about 60% question after question, recapping and emphasizing the various insolvable mysteries. I solved it, pretty quickly, and then slogged through hours of things like:
did Jim love Kathy?
did Mike know that Jim loved Kathy?
did Kathy love Jim?
did Sara know?
until I was saying
why am I still listening to this?
how much longer is this book?
will it ever end?

I'll probably buy future books from Reichs, but I sincerely hope she starts working more on plot, and less on just wordcount. The characters are interesting, and there are many ways that the stories CAN develop, so why don't we just go ahead and develop something?

What does Linda Emond bring to the story that you wouldn’t experience if you just read the book?

The narration was good - the speaker was very easy to listen to, and I would definitely listen to her narration again.

I love the Temperance Brennan books and frequently listen to them more than once. This time, however, I was disappointed. Maybe because Andrew Ryan was mostly a footnote, her daughter was a bored "also mentioned", and the plot/character development seemed thin. I was interested in the NASCAR information, but could have gotten most of it for free from Wikepedia.

Would you listen to Flash and Bones again? Why?

No--but it was okay.

What does Linda Emond bring to the story that you wouldn’t experience if you just read the book?

She is an excellent reader! I think she has good energy and voice qualities for this particular series.

This is possibly not the best of the Bones series--but it is quite good. Several others have commented on missing a couple of the usual characters--and that is true, but this remains a good book--don't pass on reading it. If the book lags at all in places, the narrator more than keeps it moving.

Not to much Nascar!

What did you love best about Flash and Bones?

I always really enjoy the forensics and science behind the discoveries, as well as the depth of description and background that Reichs provides.

If you’ve listened to books by Kathy Reichs before, how does this one compare?

This book is a bit weaker than some of her other books; it felt a bit rushed somehow. However, it's still the same old Brennan that we love.

Some people have complained about the abundance of NASCAR, and I was concerned that it would be to much. I didn't have a problem with it, however, and I am not a fan of the sport. It is well explained and relevant to the story, so for me it just became part of the background.

Read the book in-print instead

What did you love best about Flash and Bones?

I love Kathy Reichs and the way she weaves a story together.

Who would you have cast as narrator instead of Linda Emond?

Linda's performance of this sounded like she disliked the story altogether.

I had to quit listening and purchase the book in print.

Body in a Barrel

While not the best book in the series, this one still kept my attention. I'm sure the author is trying hard not to write to a 'formula' which is why Nascar racing is so prominent in this book but I wish she would focus more on the forensic aspect in solving the mystery. I enjoy all Kathy Reichs' books though & buy them as soon as they hit Audible! This one had less romance & more frustration than normal, but I still enjoyed the jousting with Skinny Slidell. On the whole, another entertaining book - especially welcome while working alone all day. If Kathy Reichs' BONES series is new to you, start at the beginning of the series & work towards this one because there isn't enough historical explanation of Tempe & her background for a newby. If you know the character & have read or listened to the whole series like I have, no explanations are necessary & the book is much more enjoyable. Another good listen from a good author & excellent reader.

of all her novels this far, I found this one to be boring and uninspiring. I'd have to relisten to chapters over and over again because I found myself losing interest and would forget what was happening .

Flashy with Lots of Twists

Characters are well developed and the story twisted enough for me not to see the ending. The performance was right on! I've never been interested in NASCAR, so the history was a refreshing plus.

This book went by much faster than the previous novel. as always, the detailed science and forensics was great. the story line was great. pretty original compared to some other books i have read. the narrator did a good job and didn't sound too cheesy doing different character voices. there were still a few times when i thought that there was a bit too much detail, but overall a great story.

Another gripping case for Dr. Brennan. This time in the NASCAR field. Very interesting and gripping until the last moment. Looking forward to the next one.