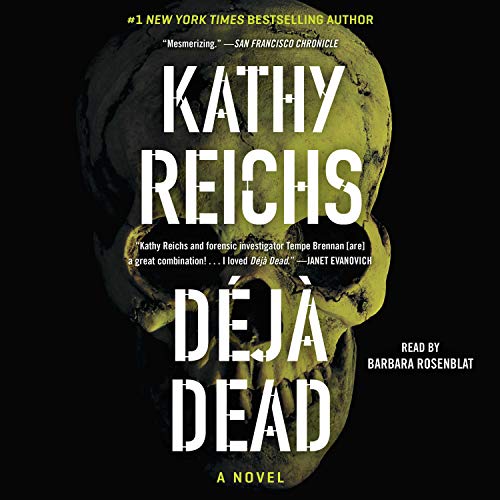 It's June in Montreal, and Dr. Temperance Brennan, who has left a shaky marriage back home in North Carolina to take on the challenging assignment of Director of Forensic Anthropology for the province of Quebec, looks forward to a relaxing weekend in beautiful Quebec City. First, though, she must stop at a newly uncovered burial site in the heart of the city. The remains are probably old and only of archeological interest, but Tempe must make sure they're not a case for the police.

One look at the decomposed and decapitated corpse, stored neatly in plastic bags, tells her she'll spend the weekend in the crime lab. Something about the crime scene is familiar to Tempe: the stashing of the body parts; the meticulous dismemberment. As a pattern continues to emerge, Tempe calls upon all her forensic skills, including bone, tooth/dental, and bitemark analysis and x-ray microflourescence to convince the police that the cases are related and to try to stop the killer before he strikes again.

Told with lacerating authenticity and passion, Déjà Dead is both poignant and terrifying as it hurtles toward its breathtaking conclusion and instantly catapults Kathy Reich into the top ranks of crime authors.

"Accomplished and chilling." ( People)
"Kathy Reichs knows how to put all [of her] exotic experience into a novel....Quebec's own Southern gal give[s] Cornwell a run for the money." (Margaret Cannon, Globe and Mail)
"What makes Déjà Dead so compelling, in addition to the authoritative descriptions of how a forensic scientist 'reads' the story the bones tell, is the character of Brennan - smart, persistent, gutsy, ironic yet vulnerable." (Judy Stoffman, Toronto Star)

Perplexed over other reviews about the narrator

I was surprised at the negative reviews of the narration of this book. I've listened to a number books narrated by Barbara Rosenblat and have always been impressed by her interpretations. Normally, I listen to books in the car, so possibly have not heard some of the "offending sounds" others have pointed out because of background road noise. But I think her performances are terrific. She has a way of creating a mood, a personality for the characters she reads. Subtleties in voice, in accent, denote and differentiate the characters beautifully. I have bought books she's narrated simply because she was the reader.

Now, the book. I have enjoyed most of the Temperance Brennen stories. A forensic anthropologist, Brennen is called in on cases where the mostly unidentifiable remains require extensive analysis and investigation to solve murder cases. There is thoughtful description of how these analyses are done, which I find fascinating. How anthropomorphic details like size,age, sex, etc. can be deciphered from clues in often very deteriorated human remains. The detailed police tactics involved in the case are also intriguing and interesting, because she describes enough detail to reveal the logic and rationale for how cases are handled. The story is convoluted, and engaging. I found I couldn't wait to get back in the car for my commute to listen to the next section of the book.

There are twists and turns in the story, and characters are revealed in such a way to lead you to wondering all the time how they fit together, and which is the perpetrator in this murder mystery.

Scenes are described with exacting detail, and given Rosenblat's interpretation, I feel drawn into each scene. Brennen's own relationships and inner demons are like a continuous undertone - a layer under the surface of the story that kept me intrigued not only with her job, but her life and relationships.

I think this is a good read, and I think Barbara Rosenblat is a great reader.

The book itself is great, but the narrator sounds like she's on a respirator. Her inspirations are so distracting. I don't know if she's a heavy breather, or the book is just poorly recorded, but I would have skipped this recording if I had known.

I enjoy the TV show Bones. Warm,funny murder mystery. This is not that, even though the series is based on K Reichs books This book is not warm or funny at all, ever. The medical terms are sort of interesting and the French well spoken by the narrator. BTW same with the series Rizzoli and Isles. Series warm funny book Not. Elsie J

Having read the negative reviews of this book for some reason I purchased it anyway. Having read one of her books I knew it wasn't 'Bones' the tv series and was based in Quebec.

The narration was good. Ok sometimes 'breathy' but it was just one isrening to someone tell you their version of events. Annoying - definitely not.

Too much French I read a couple of times was there a need? It's set in Quebec where their language is French so yes street names stores etc will be in French. Her writing a very few of the phrases in French and then translating them into English I felt lent flavour to the overall story.

Overall I enjoyed the narration the story and background information and am looking forward to the next book.

My advice on any book. Try them and broaden your horizons. Who knows one persons hate is another's enjoyment.

I am listening to this book as I write this review. I listen on my IPod while I garden or work around the house...using my headphones. I can't do that with this particular book, the narrator's swallowing and sucking throughout is thoroughly distracting and nauseating. So I pulled out my headphones, put the IPod across the room an listen from a distance to diminish the effect. As soon as I started listening, I realized the mistake I had made. I have never paid much attention to the narrator but recognized her swallowing from another book I bought in the past. From now on that will be the number one thing I check. She overacts a bit, as well.

Where does Deja Dead rank among all the audiobooks you’ve listened to so far?

This is the worst narration possible. Excellent to read but this woman narrator is the worst.

Seriously, she belches and sounds like she is chewing gum and gurgling water while reading. I was nauseous listening. Kathy has written an excellent book but you want earplugs to listen to this. I want my money back for this one!

I rarely choose a book because of the reader but in the case of Barbara Rosenblat, I sometimes look her name up and see what she is reading and if it is something I am interested in or in the genre that I have an interest I will order it just because she is reading it. I sometimes think that if she read a phone book aloud, she would make it interesting and hold the attention of the audience. Kathy Reichs is a wonderful author. I have only ordered one other book by her because of limited finances but in the future when I have another job, I will be ordering the Temperance Brennan series. Thank you once again, Audible people for a wonderful several days of entertainment.

What disappointed you about Deja Dead?

I didn't enjoy the narrator, nor the constant use of French (poorly in my opinion, being Canadian and accustomed to the mingling of the two languages in every day conversation.

The narration as I mentioned above was not to my liking. The woman's voice comes across as her being as bored with the story as I was.

What was most disappointing about Kathy Reichs’s story?

The pacing dragged. Too much introspection of the main character with too little insight into the other characters.

A narrator who didn't attempt voices unnecessarily. Often what someone says in a story is quite enough to characterize them. Using an accent, or *voice* distracts from it. Sure there are times when emphasis is required and desirable but at other times it's nothing more than unnecessary.

If you could play editor, what scene or scenes would you have cut from Deja Dead?

I would remove the use of French words. While I understand the desire to immerse the reader into the culture of the city (And don't get me wrong Montreal is a wonderful and unique place to live) but for myself it was distracting from the story. Jarring in that everytime it came up I was reminded I was reading (hearing) a story and not able to just immerse myself in the action and dialogue.

I'd had the entire series as offered by Audible in my wish list.
They are now removed. I'm glad I didn't purchase a number of them at once.

One star is too generous

This is the first time that I felt that the book was NOT better than "the movie". I am a fan of the television series Bones, and looked forward to "reading" the book. I anticipated character development much better than the tv series, instead I was introduced to a middle-aged, whining, 12-step alchoholic meddler who "blunders" into crime solving and then blames others for the tragedies that ensue.

The narration was horrible.

Who is reading this?

Holy heck, who is reading this? William Shatner? This is AWFULLY read, but appears to get better the more the person gets into the book...

The beginning was almost too painful to continue.

I didn`t wanted to hear a funny story like "oh let me tell you what happend to me last week". The narrator made it worse, she`s telling it, like something funny and unbelievable had happend waiting for the audience to laugh.
The story itself is good, but it could have been written down by a teenager.