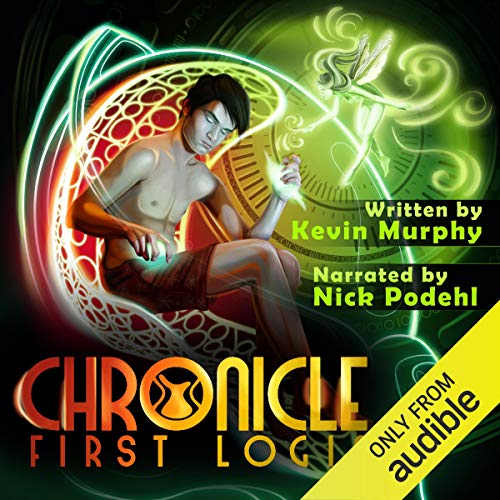 Corbin is an adventurer; he just hasn’t realized it. He was born in the wrong age - an era where the world has already grown tame.

With the advent of fully immersive virtual reality, however, that’s all going to change.

A revolutionary new game - Chronicle - makes much bolder claims than the competition. It offers a perfect simulation in a new world with quests, magic, monsters, and gods - but Chronicle’s biggest draw is something irresistible: While players are logged in, they have extra time to live.

In Corbin’s world, he may be average; he may work hard for no recognition; he may never catch a break and he may seem trapped - but a new world brings new opportunities, and extra time presents an extra chance. Perhaps he’ll find that he’s not so average after all.

This is an adventure story (not a city builder, no crafting so far) and a welcome addition to the Litrpg genre. Top points:

1. NOT a harem story! No romantic inclinations at all.
2. Actually good writing and description
3. Interesting and unique game mechanics without being overly complex
4. Some OP elements, but they are balanced by adequate weaknesses
5. MC is a good person without being sappy, lawful-good, or submissive
6. Other characters feel like real people, not cardboard cutouts

Nothing groundbreaking for the genre but this book is very well written and executed. I have nothing negative to say but there isn't much to gush about either. I would definitely recommend this book for anyone that loves litrpg and wants to listen to a good story in between more popular titles.

I've listened to over 200+ stories love LitRPG and have played many of the games associated with this genre. As the headline says I feel asleep while trying to follow the story. The main character is beyond stupid and if most people operate and think the way this character does well foolish and simple come to mind. For example learning training and not being prepared enough to figure out the value of the chain doublet he trades before trading it. Not allocating his stat points at all by the time I quit listening to this story. The character seems very juvenile and simple minded. It looks like he is trying to study and figure things out but then takes foolish actions. The story had told us that he was an experienced gamer, however things like logging out under a bridge, planning on going to a clothing store before a bath (he is covered in dirt, blood and guts). The real life situation of leaving his package out on his front door in a apartment complex just seems stupid, simple, a character or writer that has no common sense. The character just has too many foolish actions one after another for the story to be enjoyable. I am just so glad I can return this book for a refunded credit.
My suggestion would be if you have the ability to return books then try this book and see if you like it. There are possibilities with the story and you may find that this story fits for you or you may fall asleep even before I did!

Well, well, well, it seems first time author Kevin Murphy has crafted a pretty cool series starter. I enjoyed every minute of this book, and I have to say that I think that is because the main character acts a lot like I would in the same situation. This book doesn’t have an overarching goal, and the MC sort of meanders around, but I wouldn’t call this a slice of life book. Too much happens, and there is an undercurrent of mystery that gets slightly revealed at the end of the book. The MC Dakkon loses his job and ends up playing the game for real life credits. You know that I hate that trope.
Anyway, first day in the game kinda sucks for him, and he ends up lying to some guards just so he can get inside a city by claiming that he was mugged. Oddly, the guards show up later with his “stolen” gear, which just so happens to include a really cool looking knife. Now, here is where the wandering part comes in. Dakkon has literally no clue as to what he should be doing, and basically bounces from one thing to another. He meets a guy, then a group and they hunt together, and he learns that his new knife has some super killy powers. Later efforts to discover what the knife is sort of fail, and he is left clueless.
The story is pretty much Dakkon either conning people to score some cash, and I have to say he’s a decent liar, or fighting higher level mobs and leveling up. One thing I have to warn you about is that there is no clear and concise system here. At least not one that is revealed. The writing seems geared to keeping a lot of things about the game obscure too. So, don’t expect to come out of this knowing all about the game system or the game’s storyline (if it has one). Dakkon pretty much deals with everything as it comes at him, he isn’t much of a planner (as in looking ahead) but he is apt at thinking on his feet and detecting an enemy’s weakness. It is his unorthodox play style that makes him able to defeat foes that are higher level than he is, and earn the cash he so desperately needs.
He allies with some interesting people, such as a lettuce salesman, and a mysterious player who is far more than he seems. Dakkon also manages to garner the attention of a player that wants his mysterious dagger, which eventually leads him to joining an organization of relic hunters. So, basically, the book is more about what adventure is going to occur today? So, slice of life dammit! But there is an undercurrent of things that are revealed at the end just enough to whet your appetite. Personally, I liked Dakkon, just because he wasn’t a know it all smart ass who cracked jokes at every turn. He really appealed to me because of his devious nature, the guy makes a better con man than he does a fighter, that’s for certain.
Nick Pohdel really does some fine work here, and I have to say that I am liking his incorporation of sound effects into the reading. Not only did they fit, but they were also pleasant to the ears, I don’t know if he found them or made them up, but I enjoyed the addition. My only complaint with Pohdel is that he is a one trick pony when it comes to women’s voices, that is why I didn’t swoon over his work on Super Sales on Super Heroes book two, that book had ton of women to work around, and his ladies sound very similar to one another. Here the female factor isn’t overly high, so it isn’t all that noticeable or bad. Still he did great otherwise and I anticipate more growth from him in the future.

Over all this is a solid first effort, and I am going to just barely give this one an 8 star review. There were a lot of things unrevealed, the class set up wasn’t really well explained, and it was a wandering aimless book to be honest. Still, the characters and the fun outweighed a lot of that and I say give this a go and eat an imperial salad while you do so.


As seen on the Litrpg audiobook podcast!

Great Audiobook with THE BEST narrator!

Ready Player One meets The Land

Chronicle is an emersive virtual reality game where the player gets eight hours in game for ever real hour and the in game currency is worth more than real money.

Corbin is an average guy who manages to buy a second hand pod and get into the game. From there he has a good run of bad luck or so it seems.

I loved the way that Kevin Murphy made Corbin completely fallible as well as his in game character who made mistakes but persevered. I like the way the story progressed and did not end the way you thought it would. I also appreciated that Kevin wrote the book from a realistic point of view of it being a game, but Corbin still had to go to work.

Nick Podehl gave another masterful performance and is fast becoming one of my favorite narrators. Of you like fantasy and lit rpg I recommend this book.

Listened to the story til the end, but regularly hit parts with bad writing — MC suddenly losing all ability to judge dangers and getting taken advantage of by the most obvious ploys. Just frustrating to listen to at times.

What a great book can't wait for book two!

loved the book, it's not all laughs and everything working out, however it a great read and leaves you wondering what's next. there is also a new twist that I haven't seen before in an LITRPG, Love it!

he does a ton of research but none when choosing his class or trading.

still interesting though, and the 30 sec skip helps smooth the stupid

The MC is a complete idiot.

The MC gets tricked consistently the first half of the book because 1 he's an idiot and 2 he's to lazy to actually sit down and plan out a path.

honestly I actually cheered when this mc died the first time and the only reason why I continued to listen to this book was in the hope's that someone would trick this idiot again.