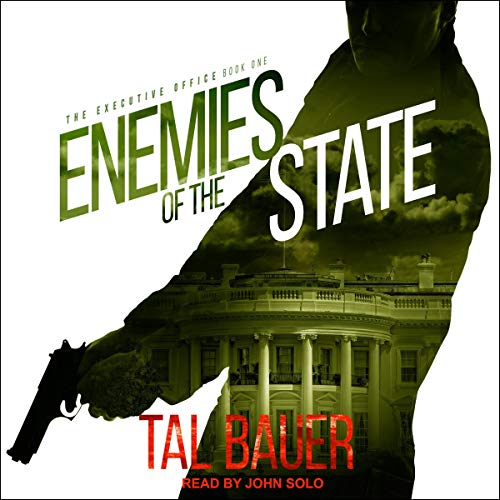 Enemies of the State

Newly elected President Jack Spiers's presidency is rocked from the very beginning, and he's working furiously to keep the world from falling apart. Between terrorism attacks ripping apart Europe, Russia's constant posturing and aggression, and the quagmire of the Middle East, Jack is struggling to keep his campaign promise - to work toward a better, safer world.

For Special Agent Ethan Reichenbach, Jack is just another president, the third in 12 years. With Jack's election, he's been promoted, and now he's running the presidential detail, which puts him side by side with Jack daily. He's expecting another stuffed suit and an arrogant DC politician, but Jack shocks him with his humor and humanity.

There are rules against a Secret Service agent and one of their protectees developing a friendship - big rules. Besides, Jack is straight as a ruler, and a widower, and Ethan has always avoided falling for straight men. Ethan keeps his distance, but Jack draws him in, like gas to a naked flame, and it's a lure he isn't strong enough to turn away from.

liked the book, and though the narrator might be well at creaying voices he is very irritating in his over-dramatic whiny characterisation of situations. SO SO annoying. with a more subtle approach the story might have stood out more and many even been great.

Don't know why I waited this long to read and listen to this thrilling ,hot AF , action adventure, mystery, meticulously crafted, researched and layered , MM romance book; because folks, it is an AMAZING , exhilarating story!

I was glued to my Kindle and shunned all type of adulting -staying on my pajamas the entire day included - until I finished reading/listening in it's entirety. LOL 😁😀 Good times!

John Solo narration of Enemies of the State was phenomenal.

Full disclosure: I began listening to this audio through Hoopla, but I soon realized I liked it so much, needed to have it on my permanent library . Therefore, bought it at Audible #AudibleCreditWellSpent

loved the book. not so much the narrorator

I love jon solo. I really do, but I found his performance super whiney in this series
I wish they Tal went for Sean Crisden or Greg Tremblay for this series. he pulled me out of the book so many times cause the narrorator was so freaking whiny and didn't match either of the MCs. Very disappointing. I dont know if I'm going to buy the rest of the series if he does the same whiny narration for the other books

I’ve long since waited for this audiobook to be released. I’m so thrilled that it’s finally out. I love the book, love the story, love Ethan and Jack. I knew listening to the audiobook will bring a different layer to an already incredible story. And it really did! It’s like being there again.. feeling what Ethan was feeling, same with Jack and the other characters.

John Solo did a good job with the narration. He wasn’t my first pick of narrator for this series, specially with Sergey’s Russian accent.
But he wasn’t bad at all. Maybe I’m just being nit picky because I really love this book and was waiting for it to be on audio and have set a standard on how the characters would sound like in my head. That’s on me though. 😬

I knew the book was going to be great and it didn’t disappoint waiting for the other to come to out hope I don’t have to wait to long great great book all the authors books are great thank you,,,,,,,,,,,

Was excited to see this

This is by far one of my FAV series and I was soo excited to see it I bought it immediately! However, I didn't feel that this narrator's inflections and the words he chose to emphasis added value to the book. Additionally, I didn't care for the voices he gave to the main characters. JMHO

I’ve been waiting for this series to come out in audible format for what feels like forever! I cannot wait for the rest of the series and hopefully all of Tal’s books eventually. I was hoping for a stronger richer accent for the Russian President. But that’s the only nitpick/complaint I have with the audio. John did an excellent job! I hope the next installment comes out soon!

YES! It went to audible! Wonderful

I read this series a while back, I loved the books but I LOVE that it went to audible. A M/M lovestory with a STORY! I don't tell you the story doing a review but hold on for a ride when you listen! LOVED IT! So when are the rest of the stories about Jack and Ethan coming to audible?

I love Enemies of the State by Tal Bauer. It’s suspenseful and entertaining and I couldn’t put it down when I first read it. I've been waiting and hoping it would be released in audio ever since.

I'm happy to say the narration makes the story even better. I think John solo did a great job. He really brought the story to life. And I appreciated all the different voices he used. I really hope that the rest of the series will come out in audio soon