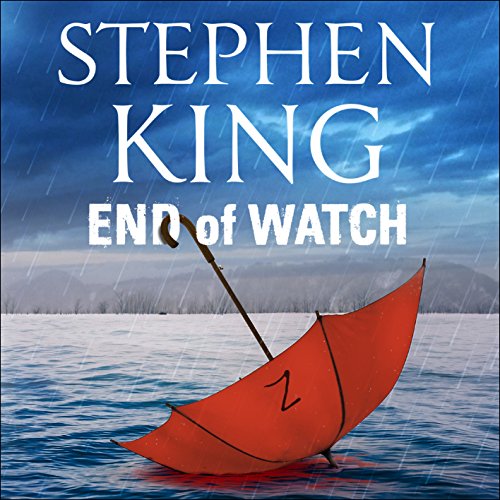 End of Watch is a compelling and chilling suspense novel which sees retired detective Bill Hodges back on the trail of his nemesis, Brady Hartsfield, the criminal the press called The Mercedes Killer.

Foiled in his attempt to commit a second mass murder, Hartsfield is confined to a hospital brain-injury unit in a seemingly unresponsive state. But all is not what it seems: Brady is able to influence both his physician and the hospital librarian to commit crimes in the outside world.

Now the technological genius has created a hypnotic electronic fishing game which compels users to commit suicide, and he is determined to target the three people who put him in hospital: Hodges and his sidekicks, Holly and Jerome.

The trilogy concludes with the resurrection of the evil Mercedes Man. Typically great characters, including the villains. The narration was excellent, especially for Holly, who is on the autistic spectrum.

Excellent conclusion, as per usual.

Excellent conclusion, to the trilogy. There's another Holly story in If It Bleeds. Also an excellent book

A good end to the trilogy, it became a little more 'out there' in true King fashion. Enjoyable overall.

Not the best of King

I loved Will's performance. The story though was wanting and I forced myself to just complete it because it is a Stephen King novel. I loved his work growing up but am not sure why this series was hard for me to love. I listened to all three books. I love the second one better than the first and this last one.
I found the Mountain Man series by Keith C Blackmore a much better book by far compared to this book by King.

Predictable right from the beginning...

The end of the Bill Hodges Trilogy

Yes. An easy, entertaining read. Many of the concepts such as core consciousness, mind control and hypnosis are complicated and accepted in the text without explanation. Other concepts such as mind invasion ( one mind physically taking over another) are fantasy, but interesting

What was one of the most memorable moments of End of Watch?

When Brady Hartsfield finds he has the power to jump into other peoples minds. When Bill Hodges finds he has terminal pancreatic cancer.

No. The concepts were too far out to evoke an emotion in me. Sad to see the series end , though.

At times Stephen King suffers from being a horror writer. He is writes well enough and his concepts are elegant enough that they could stand on their own without sensationalism. However, Can' t argue with success.