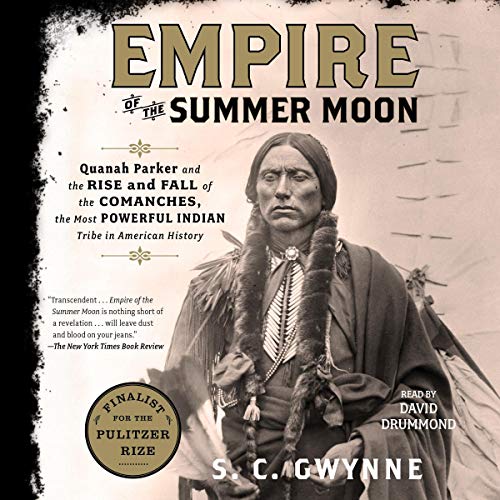 Empire of the Summer Moon

Empire of the Summer Moon

Empire of the Summer Moon spans two astonishing stories. The first traces the rise and fall of the Comanches, the most powerful Indian tribe in American history. The second entails one of the most remarkable narratives ever to come out of the Old West: the epic saga of the pioneer woman Cynthia Ann Parker and her mixed-blood son, Quanah, who became the last and greatest chief of the Comanches.

Although listeners may be more familiar with the names Apache and Sioux, it was in fact the legendary fighting ability of the Comanches that determined just how and when the American West opened up. They were so masterful at war and so skillful with their arrows and lances that they stopped the northern drive of colonial Spain from Mexico and halted the French expansion westward from Louisiana. White settlers arriving in Texas from the Eastern United States were surprised to find the frontier being rolled backward by Comanches incensed by the invasion of their tribal lands. So effective were the Comanches that they forced the creation of the Texas Rangers and account for the advent of the new weapon specifically designed to fight them: the six-gun.

The war with the Comanches lasted four decades, in effect holding up the development of the new American nation. Gwynne's exhilarating account delivers a sweeping narrative that encompasses Spanish colonialism, the Civil War, the destruction of the buffalo herds, and the arrival of the railroads - a historical feast for anyone interested in how the United States came into being.

Wow, this was such a good book. I laughed, I cried, I cringed. There was good, bad and ugly but it was all real. I don’t think a book has ever given me simultaneous feelings of such pride and shame for history. I really hope someday that Quanah’s home can be restored. If you google it, it’s still there in Oklahoma but is in disrepair.

The narrator is difficult to endure. The voice cadence is unnatural, inflection of tone also unnatural. Almost robotic. Book however is fascinating.

This is a history book, written in story form. I checked a number of statements and accounts of events and they agreed with outside sources. I have no reason to doubt the author but some of the events were completely new to me. This was very well written, especially when considering that many related things were happening and different viewpoints were shaped at the same time in different parts of this vast land. This subject is not a huge hobby or interest for me to follow but I was fully engaged in this book. Highly recommended.

I've read a few books that focus on the Native American culture and the impact on the American West. I particularly enjoyed "The Heart of Everything That Is: The Untold Story of Red Cloud, An American Legend" written by Bob Drury, and Tom Clavin, and also Nathanial Philbrick's "The Last Stand", and "The Mayflower", each providing a glimpse into what Native Americans were up against, and the finality of their existence. This book provides an insight into the lives of one of if not the most feared tribes ever to grace the North American continent: The Comanches.

Plain and simply put, the Comanche nation was nasty! This is a band of natives that stopped at nothing when it came to war, whether they fought, captured, tortured, raped, scalped, or simply killed their opposition, they held nothing back. And they conducted these atrocities with fervor and zest which is far more extreme than any of their native cousins might have done. And the author doesn't hold back. Each detail is spelled out regardless of the victim, regardless of the situation, and without concern for a reader's queazy stomach. The nasty details are all provided as the historical significance of this great tribe unfolds.

The book feels a bit long in places though may be a result of the author's effort to include every generational anecdote from the early 1700's until their ultimate demise in the late 1870's. Little appears to be left out so the chapters are filled, and thus long(er) in spots. But the tiresome length is helped along with an easy to listen to narration which is evenly pitched, with perfect inflection and annunciation. David Drummond does an excellent job!

If you're looking for a book on Texas, and Oklahoma Native American history, this is the one for you. No details are left outs and you'll find each chapter full of historical significance you'd be hard-pressed to find anywhere else.

Such a fascinating dive into a distinct part of history. The only critique is it seems the narrator was emotionally disengaged from the book's content, which left more to be desired from such a powerful story.

Would you consider the audio edition of Empire of the Summer Moon to be better than the print version?

Listening to the story gives it that around the campfire feel that seems very appropriate for this book.On the other hand, this kind of book has lots of information, and I prefer to have a hardcopy in those cases, so that I can make quick notes and refer back to previous passages.

I loved that it weaved together a pretty thorough story of the settling of the West, the frontier in Texas, history of firearms, the influence of Spain and Mexico, the Comanche culture, pioneer ignorance and ingenuity, Texas Rangers, and the transition of Quanah into a statesman.

He's very even! No issues with voice or volume modulation and his voice is very pleasant. He does a minimum interpretation of characters, very few character voices, and that is something I definitely appreciate.

There's a lot of history here. Better broken off and chewed in pieces.

A story that needed telling.

In Empire of the Summer Moon, Gwynne details not only what the daily lives were like for the Comanche people, but how their presence and strength hindered America's westward expansion into the great plains. It provides much needed perspective for people who do not understand the intricacies and danger of a life lived in the "wild west".

Hearing about a woman who was abducted by the Comanches and then refused to assimilate back into american culture when "saved" really tells you something about the life on the land that the Comanches had. I learned so much and the time flew by while listening to this book.

This book provided me with so much unknown history of the American West. Time well spent.

This was a hard lesson on American history. The domination of man over man expressed in horrific ways. I will listen to it again after my feeling stop hurting.