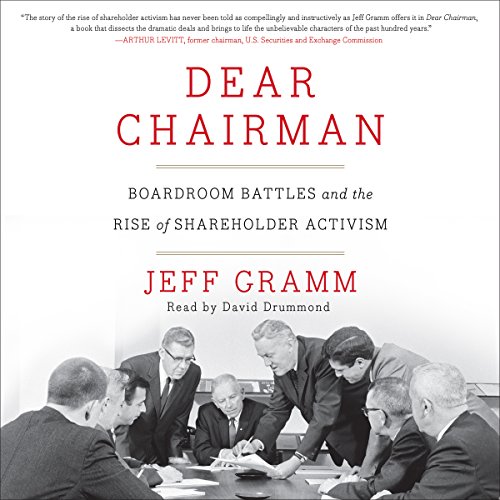 A sharp and illuminating history of one of capitalism's longest-running tensions - the conflicts of interest among public-company directors, managers, and shareholders - told through entertaining case studies and original letters from some of our most legendary and controversial investors and activists.

Recent disputes between shareholders and major corporations, including Apple and DuPont, have made headlines. But the struggle between management and those who own stock has been going on for nearly a century. Mixing never-before-published and rare, original letters from Wall Street icons - including Benjamin Graham, Warren Buffett, Ross Perot, Carl Icahn, and Daniel Loeb - with masterful scholarship and professional insight, Dear Chairman traces the rise in shareholder activism from the 1920s to today and provides an invaluable and unprecedented perspective on what it means to be a public company, including how they work and who is really in control.

Jeff Gramm analyzes different eras and pivotal boardroom battles from the last century to understand the factors that have caused shareholders and management to collide. Throughout, he uses the letters to show how investors interact with directors and managers, how they think about their target companies, and how they plan to profit. Each is a fascinating example of capitalism at work told through the voices of its most colorful, influential participants.

A hedge fund manager and an adjunct professor at Columbia Business School, Gramm has spent as much time evaluating CEOs and directors as he has trying to understand and value businesses. He has seen public companies that are poorly run and some that willfully disenfranchise their shareholders. While he pays tribute to the ingenuity of public-company investors, Gramm also exposes examples of shareholder activism at its very worst, when hedge funds engineer stealthy landgrabs at the expense of a company's long-term prospects. Ultimately he provides a thorough, much-needed understanding of the public company-shareholder relationship for investors, managers, and everyone concerned with the future of capitalism.

Here is a walk through shareholder activism starting with Benjamin Graham's first activist letter in the late 1920s, through fairly recent times. Many facets of US corporate history and related investor culture are captured in colorful personality-rich stories. These are presented in somewhat distinct phases of about 10-20 years' duration each, as the markets and all players and their tactics have changed. My post-1980s sophistication about this history was limited, so I am grateful for the update in understandable terms and listenable form.
The use of investor letters as the springboard for each story is a novel idea that works well. I applaud the inclusion of the appendix at the end reciting the letters verbatim, which works as a refresher of the book's stories and points out the stark changes in tone and approach that activist shareholders have taken. Having heard this, I feel much better grounded to understand today's corporate headlines, and the dynamics of governance.

The Evolution of Corporate America

There are many takeaways in this book, but what fascinated me most is the history of the relation between the corporate management, board of directors and the shareholders. This book gives a great perspective about this.

I believe this is an education text book for new board members and active shareholders.

Author selects a rich cross-section of examples through both time and industry, tying each up with illustration against the general backdrop of the time.

Corporate Governance for the masses

This is a good, fairly engaging tale of corporate governance and shareholder activism over time. Gramm brings otherwise esoteric topics dealing with terms like 10-Ks and 13-Ds to life through narrative storytelling that’s accessible to your average layman and still engaging for the wonks in the room.

It’s not the definitive bible on such matters, as opinions may vary, but it certainly serves a niche in the biz-lit market.

VERY WONKY BUT EXCELLENT FOR THE RIGHT AUDIENCE

I teach strategic management in a business school, so my interests are relatively specialized, this history fit the bill. For feeling like I can now give a good general history of corporate governance and shareholder activism in the United States, I could rarely find anything better. However, if this isn't your cup 'o tea, well then, read at your own peril!

Really enjoyed the book and the narration is strong. Full letters are at the end to boot.

Really good read for biz types. Great histories. Glad the letters were reprinted it would be nice if they had sub chapters to skip to.