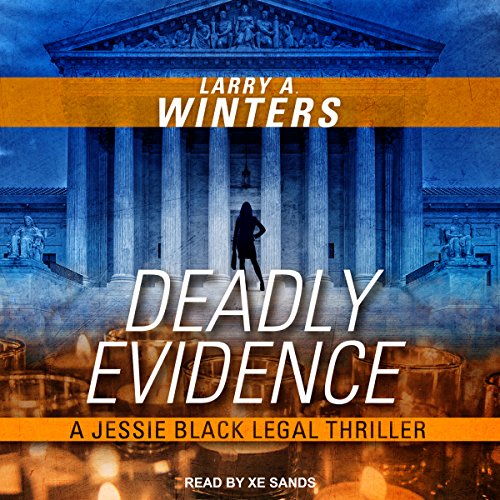 A school shooting. A city in mourning. A prosecutor out for justice.

When a massacre at an elite private high school leaves 17 dead and a city reeling with horror, Philadelphia assistant district attorney Jessica Black will stop at nothing to find justice for the victims. But doing so will require facing an adversary even more terrifying than the teenage shooter.

The Internet can be as deadly as a gun.

Lurking in secrecy is an evil voice known only as True_Man. True_Man haunts the Internet, befriending the lonely and the frustrated, turning adolescent emotions toward destruction. Jessie believes True_Man is just as guilty of murder as the teenager he manipulated, but proving it - and bringing True_Man to justice - will take all of Jessie's formidable legal skills and more.

"Larry A. Winters brings suspense and twists in this book that kept me interested and turning the page." ( Lifes Good Journey)

This book starts out with a teenage boy shooting 16 cheerleaders and their coach and waiting for the police to arrive. When they do the boy is disappointed that there are only two plain clothes officers and the lead is a woman. He wants to commit suicide by cop but looses his nerve when the scenario doesn't go according to the plan. Turns out, he's not the only one making plans. There's a website geared towards misogynists and someone on that site was spurring the boy on to do something about his anger, like taking a firearm to the school.
When the arresting officers find out that one of the girls was sleeping with a teacher the investigation takes a turn. The rest of the book deals with looking for the mystery man and the teacher. The are many suspects and each has to be eliminated until the shocking conclusion when the perpetrator is finally revealed.
Excellent addition to the series. Xe Sands does a great job narrating.
HIGHLY RECOMMENDED.
If you found this review helpful please indicate so.

Lots of action and suspense!

This suspense mystery/legal thriller is the third novel in the Assistant District Attorney Jesse Black Legal Thriller series. Deadly Evidence is about the murder with a rifle of all members of a 15 girl high school cheerleader squad and their coach by a teen boy. Even though the boy also died, prosecutor Jesse Black is unwilling to drop the case because she believes that there are persons who enticed the boy to commit the murders. Like the earlier novels in the series there is little courtroom action. Xe Sands narrates this fast paced and action filled novel very well.

"Deadly Evidence: Jessie Black Legal Thrillers, Book 3" (2016, 2017) by Larry A. Winters is an interesting, stand-alone legal thriller about Philadelphia Assistant District Attorney Jessie Black expanding her inquiry after a school shooting in which seventeen people were killed. After the young shooter hangs himself while in custody, Jessie pursues an uphill battle to prosecute the anonymous internet figure who encouraged the shooter. An engaging read, but I would have liked to have seen more people of color. Narrator Xe Sands is effective. Solidly recommended.

I did not like the narrator, I had a very hard time listening to her. It was like she was mumbling. I finally gave up on the book.

What did you love best about Deadly Evidence?

Continuation of a great series.

All of the twist and turns of the storyline.

It was and I did!