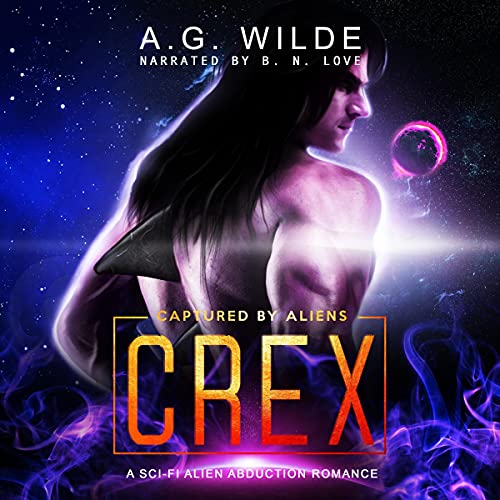 There are two types of hell.

The one priests preach about and then this.

Stuck on an alien slave ship, Piper is auctioned and thrown into a cell with...something.

He’s an alien with a reputation.

A warrior. A beast. A killer.

A creature with a cold, cold heart...one not unlike her own.

You’d think falling for an alien killing machine was something so far-fetched it would never happen.

Well, so was being abducted out of 7.5 billion other humans on Earth - and that had occurred so...

Hey, what’s the worst that could happen?

Crex is book two in the Captured by Aliens series. It is a complete stand-alone so it can be listened on its own. However, the story will be more enjoyable if the audiobooks are listened in order.

This series just keeps getting better and better. I loved this couple. They were so real and authentic. Never a dull moment in the plot. Great book!

Next book in series?

This book ended abruptly and unresolved. Don’t like books ending this way unless the next book is available; in fact, this should be part of a box set. Storyline was typical paranormal romance; but I like it if it has a different spin. Some interesting critters were introduced. A couple parts didn’t make common sense with Piper (doing dumb stuff); but it was worth listening to for Crex.

I am loving this series!!!! just wish there was a male narrator for Crex and the other heros

I really liked the story! I work 45 minutes away from home and I look forward when Chicago traffic gets worse; so I can listen more! The only thing I had to get used to is the performer, she did great with the female voices, not so much for the male voices. Although, the song she sang in the end was wonderful! Looking forward to the next book!

and must survive after being enslaved by aliens. She relies on her inner strength and is in awe of her prison roommate's self-sacrifice and outter strength. Slow burn romance that starts on a slave ship and then continues after they crashland on a planet. Overall an engaging book.

I enjoyed the story. Piper worked my nerves, and at least she seemed to grow up. I did not care for the ending. The cliffhanger was irritating.

This was a great book Piper rages at the loss she suffered and rightfully so! Crex and Piper are literally fire together, the story building is real enough that you feel you are there!

This book was disappointing as it wasted a lot of time repeating scenes, for example 8 chapters of beatings and threats is 7 chapters too many. Then to have back to back to back action scenes with little character development, and then the freaking singing omfg NO. I hated Piper because she was too stupid to live most of the time and Crex had no personality. After they hooked up I figured the plot would take off and they would have shared growth...nope. By the end I just didn't care about them. I know each book in this series is a stand-alone, but based on the fact that they all end up on the same planet (repeating the first book), I'm just not interested in continuing the series.

Loved the characters! I really enjoyed how they slowly started bonding. I'm glad Piper didn't go all nuts on Crex when she found about the blood transfusion. Minimal drama between the couple which I love in a romance.