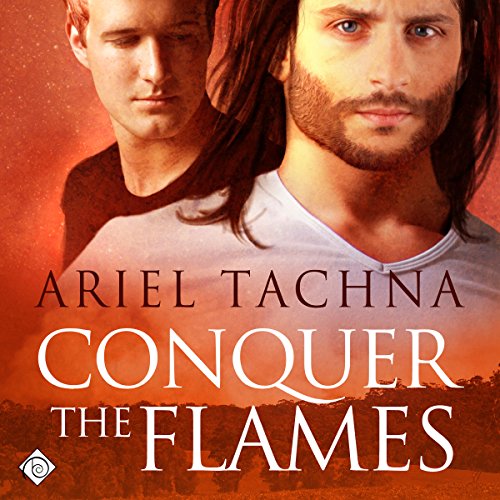 Thorne Lachlan knows a thing or two about getting himself safely out of a blaze. For years he fought in the world's hot spots, a commando with the Australian Army. Now, retired, he fights flames for the Royal Fire Service. When a grassfire brings him to Lang Downs, the next sheep station in danger, Thorne meets Ian Duncan and sparks fly that neither man can put out. But both men have ghosts from the past that stand in the way of moving beyond mutual attraction.

While Thorne longs for the home he could share with Ian at Lang Downs, he fears his own instability might make him a danger to others. And Ian's always believed that the foster care nightmare he escaped before coming to Lang Downs would make any relationship impossible. Trust doesn't come easily to Thorne or Ian until the fire's aftermath forces them to see past the scars keeping them both from healing.

My issue with the final (hopefully) instalment, is believability. How many more gay romances can one sheep station have? The chances that the two preteen boys in book one, would grow up gay and in love by book four, seem pretty remote to me. Fantastic twists of fate aside, the writing and narration are as good as the first. You'd be better served wrapping up your Lang Downs series at the third book in my opinion. On the plus side, the narrator finally gets "Dry-as-a-bone" right. Bye bye "drizza-bone".

This book should have had a warning for possible triggers due to content. Great narration.

There is a new threat to Lang Downs. A wild fire. It's roaming just outside the station limits, coming closer and closer for every hour that passes. Thorne Lachlan has been fighting the fire for weeks in hopes of getting it under control. When his captain orders him to go to the nearest station, Lang Downs he is very reluctant to go, feeling he is more needed at the front lines. He does not want to argue with stations owners for help to fight the fire. Against all hopes he finds the people at Lang Downs not only doing what they can to protect the station, but also willing to lend all hands to actively help fighting the fire. They also offer him room and board for the duration. Well, more force than offer really. At Lang Downs he’s instantly captivated by one of the jackaroos, Ian Duncan. There’s something about the man that draws him in. Two lost and wounded souls dancing around each other. Both wanting more, but obstacles keep them at arm’s length. Thorne’s life changed irrevocably when he lost his family to a fire when he was 18. Since then he never had a true home, having spent the last 20 years as a Commando, fighting to make the world just a little bit safer. But fighting for that long has left him with battle scars, some more fresh than others. And only three months out he’s still having some trouble acclimating to normal life. But maybe he will have the chance if he stays on Lang Downs, accepting the help they are offering. Ian has loved on Lang Downs since he was in his late teens. He too has a traumatic past still hanging over him, and making him wary of others. He never gets close to anyone, and when he’s drawn to Thorne his life turns upside down. Experiencing thigs for the first time, but afraid of what it could mean. Their relationship builds slowly, it’s patient, exploring and discovering and should be a beautiful one. That is if I could muster up some feelings or connection to them. Which sadly I couldn’t. I didn’t enjoy this book as much as the others, it didn’t resonate. I can’t say that I disliked any of the characters, because they were likable and I felt for what they’d lost, what they’d been through. Still though I didn’t connect, to them or to the story as a whole. It felt like Tachna was telling the reader/listener what to feel and when to feel it and I just couldn’t. I want to be shown why I should love characters, be invested in their story, I want to be there for the journey – not be told about it afterwards. Sure I felt for the characters, I wanted them to find happiness, to move on from all the horrible things that happened in the past, but that’s more of a general feeling rather than a deep rooted need that I wanted to have. You know, the problem with listening, or rather reviewing, the same narrator book after book in a short period of time, is that you run out of words. That is unless you want to repeat yourself over and over, which frankly gets a bit tedious. So I’m going to keep this short and just tell you that William James once again delivered a great narration of this book. I loved the accent (which I wanted more of) and I love that he has different voices for the characters and adds feelings to his words. So while the story didn’t work for me this time, the narration did. A copy of this book was generously provided by the publisher in exchange for an honest review for Love Bytes

The Langs Down Series just gets better and better. This is book 4 and though each book has new characters it does focus on a recurring theme and characters and is probably best read in order. Trust me it is worth the read.

Conquer the flames is about Thorne an ex-military man that has been wounded and retired working as a firefighter. He is sent to warn and access the help needed on the Lang Downs Station and finds himself drawn to the men, the story behind them and the land. He hasn't felt welcomed or found a home since he was eighteen and joined the military and is surprised he is welcomed here especially with his PSTD.

This is Ian's story. He is one of the original characters, a crew boss and Niel's best friend. Until now I wasn't sure of his orientation. ( well, I kinda was since I had snuck peeks at all the blurbs...so I knew his story was coming up). I absolutely fell in love with Ian. His story is quite sad and I love a good survivor story and man is his good.

William James does a fabulous job narrating this series. He brings each character to life, and can really add the excitement to the already fabulous story. He makes the sex scenes breathtaking as well.

If you like stories set in Australia, sheep stations, Jackaroo, Firefighters, military men, lots of angst, and a very sweet romance this one is fabulous.


I received a free copy of this book to read for Inked Rainbow Reads in exchange for an honest review.

I have to say that this was by far my favorite installation of this series. I absolutely fell in love with and felt for both Thorne and Ian. They both had hard things in their past to get over, but together they managed to realize they could no longer simply ignore those issues if they wanted to be together.

There is a lot of love that is shown in this book, not just between our main characters, but brotherly love and family love that comes from the other people we've gotten to know from previous books in the series.

I would say this is a standalone book, however, to really understand the way Lang Downs works, you'll have to start at the beginning.

I can't wait to read more from Ariel Tachna.

I will make one note about the narrator besides saying that I like the way he gives each character their own vocal tone so you know who is who and he reads them so well there aren't any parts that leaves you wondering what just happened because it might've been read with the wrong feelings. The narrator does leave very audible swallowing noises in the audio, which I found quite distracting at times. Other than that, well done.

Loved this story. Hooray for Ariel Tachna writing a compelling love story while bringing to light one of the LEAST talked about heinous crimes to boys. Also for showing how rape and sexual abuse affects a person ALL OF THEIR life!

And finally how they can, with help, can have a better life not being held prisoner by their fears.

A Wonderful Story with Exquisite Narration

Would you listen to Conquer the Flames again? Why?

Yes, absolutely, and I intend to after I have listened to the previous books in the Langs Down series.

What was one of the most memorable moments of Conquer the Flames?

When Thorne rescues Ian from the wildfire. Another was when Ian rescued Thorne from the canteen.

What does William James bring to the story that you wouldn’t experience if you just read the book?

Mr. James is a truly gifted narrator who was able to switch from an American accent to a rich and spot on Australian accent and making it sound easy to do! It almost makes me wonderful if he isn't Australian. He was able to voice each character uniquely, so much so that I didn't need the reminders of who was speaking.

Who was the most memorable character of Conquer the Flames and why?

I won't spell this correctly, but it was the cook, Cummi. A man of few words who made a huge impact on everyone's life at the station.

I'm off to buy the rest of the audiobooks in the series!

What did you love best about Conquer the Flames?

Fantastic to hear the about more happening on the outback station, solid characters. Great story line.

All the characters are believable. This makes for a fascinating story

I think this was my favorite of the series so far, although I did really like the 1st book, Inherit the Sky. All the previous couples make an appearance in this book, but this book is much darker than the previous books. The author delves into some abuse and PTSD issues and I think handles them very well. The narrator continues to do a great job and I hope there is another sequel soon. Although this book is part of the series, I'd say you have to read the 1st book, but not book 2 or 3 to enjoy this one. I liked all the books and each couple kind of stands on their own, but Caine and Macklin are in all the books. Worth a credit.