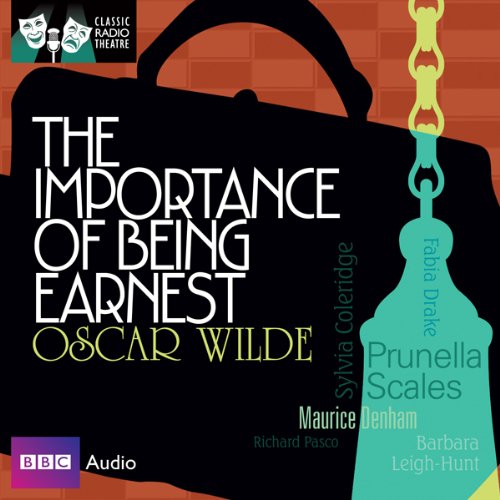 Classic Radio Theatre: The Importance of Being Earnest (Dramatised)

Martin Clunes and Michael Sheen star in this full-cast production of Oscar Wilde’s well-known play. Oscar Wilde’s dazzling comedy about mistaken identities and secret engagements still delights audiences over a century after its first performance in 1895.

Algernon Moncrieff, a bachelor-about-town, has invented an invalid friend called Bunbury in order to get out of tiresome family engagements. At the same time, his friend, Jack Worthing, has invented a wicked brother called Ernest to disguise his own misdemeanours. When Algernon poses as Ernest to win the heart of Cecily Cardew, confusion reigns, and it takes the discovery of an old black handbag to reveal the truth.

The Classic Radio Theatre range presents notable radio productions of much-loved plays by some of the most renowned playwrights, and starring some of our finest actors.

The Extended Version - A Real Treat

Just want to say that this is a rare, uncut version of the play. Audible's other "Earnest" titles are of the abbreviated text usually performed. It's a real pleasure to hear Wilde's very witty lines - and a whole scene - which are routinely cut from productions.

If you already know "The Importance of Being Earnest" or other of Wilde's very funny plays, you'll be aware that the plot is pure fluff and silliness. I mean that in the very best way: Monty Python and P.G Wodehouse (What Ho, Jeeves!) owe a debt to Oscar Wilde.

This is obviously an older recording, but the sound is quite good. The performers are wonderful, tho perhaps less well-known that those on other versions. I enjoyed this thoroughly!

Still wildly laughing after all these years.

Would you consider the audio edition of Classic Radio Theatre: The Importance of Being Earnest (Dramatised) to be better than the print version?

This is a relevant story.

I used this performance to study for a graduate level literature exam and did very well on the exam. I recommend this as a study resource.

The actors did a fantastic job in every way! My high school senior was required to read it for our homeschool and I always follow along with the books. This one was a delight and he enjoyed the humor as well, especially being fond of Algernon.

what a wonderful play. Wilde ingeniously criticizes Victorian standards in such a way that one would have been delightfully charmed to be critiqued.

Directed and acted with real genius and verve, and amusing sound effects. The dialogue appropriately runs at a fast clip. I've read, heard, or seen this play at least 20 times but this BBC version still made me laugh and revealed hidden jokes and parallel actions. I listened to nearly all the Audible samples of this play and found this one the most accomplished.