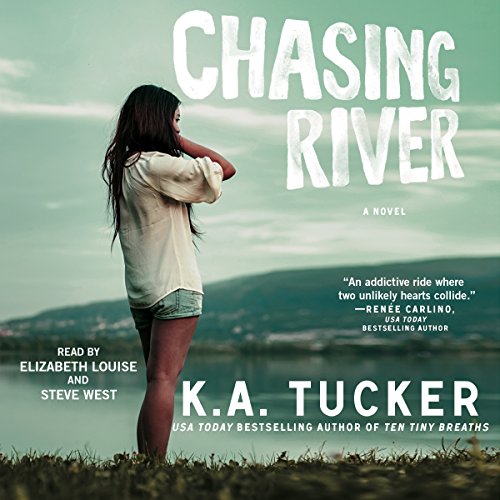 Armed with two years' worth of savings and the need to experience life outside the bubble of her Oregon small town, 25-year-old Amber Welles is prepared for anything. Except dying in Dublin. Had it not been for the bravery of a stranger, she might have. But he takes off before she has the chance to offer her gratitude.

Twenty-four-year-old River Delaney is rattled. No one was supposed to get hurt. But then that American tourist showed up. He couldn't let her die, but he also can't be identified at the scene - so he fled. Back to his everyday life of running his family's pub. Only everyday life is getting more and more complicated thanks to his brother, Aengus, and his criminal associations. When the American girl tracks River down, he quickly realizes how much he likes her, how wrong she is for him. And how dangerous it is to have her around. Pushing her away would be the smart move.

And River isn't the kind of guy she'd want to catch.

Amazing! 5 stars is just not enough!!

This author s extremely talented. This is the second book I have read/listened to by her. I was surprised at how well the story progressed. The story line is original... the character development is well plotted! There is no draw back to this listen. The story unfolds, is not full of hot sex scenes... the sex is there ... just realistic... and the minor characters are also well plotted. To say I loved this book is an understatement. I don't say this often, but I would BUY this book.CREDIT WORTHY!!!!!! The narration was perfect. The story line original... you become invested in the characters..... Brava Ms. Tucker... this is truly a hit and worthy of being a best seller!

I loved the narrators and K.A.'s overall writing style as usual, but I could never connect with Amber's whining and offense to anyone whom had made mistakes in their past. I read the first book in the series and thought some of Amber's determination, self awareness, and drive would show itself here, but it never did. It felt as if the she waited for things to happen to her and react instead of making any decisions on her own - a character trait i find extremely tedious to listen to. Hopefully Ivy's story will be more of an active character.

If I was curious about Ireland, now I LOVE it!

KA Tucker knows how to write original stories! chasing river is not what I expected, and I am so happy I finished it, it was slow at the beginning but everything was necessary to the story.
Amber and River were meant for each other. I want my River! NOW!
Amazing performance by Elizabeth and Shane! Loved the accents! Perfect!

Not one of Steve West's best

I normally really enjoy Steve West's narration, however, I feel he did a poor job in this book. Story was good and the ending came together rather easily, but nevertheless, my overall score is still a 3.5 stars but I rounded it up. Book addressed terrorism, the love of a family member involved with terrorism and the sacrifices made to remain supportive of a loved one mixed up with the wrong things in life and the hard decisions one must make to survive. I think I would have enjoyed the book had I really liked the narration. As it stands, may be worth a point if one is not stressed by issues discussed.

I loved it, it was so addicting and captivating. River and Amber's story was awesome! I loved the way they meet and all the obstacles they go through to make such an awesome ending to another fascinating book from KA!

Where does Chasing River rank among all the audiobooks you’ve listened to so far?

As if I needed another reason to love K. A. Tucker books, Chasing River exceeded my expectations! Just like the rest of her collections, I'm left wanting more! Not to mention my love for her modern day twist of hero and damsel in destress!

Slowwwwwww. Pretty boring book actually. Make a decision already instead of humming and hawing though the whole book.

STORY (contemporary romance) - Amber is the perfect all-American girl vacationing in Ireland. River and his brother are bartenders who manage the family pub in Dublin. Through a dangerous twist of fate, they meet and fall in love. This is a sweet story of love found when one least expects it and how Amber and River figure things out. The background story is that of River's older brother, Aengus, who has ties to the IRA and other criminal behavior in Ireland.

I enjoyed the romance and the Irish setting, but there's nothing particularly new or fresh to this story. The characters are likeable and fall in love, and there's the usual back story to fill in the gaps.

PERFORMANCE - This book has two narrators, a female who reads Amber's chapters and a male who reads River's, so you get alternating viewpoints as the story progresses. Each of them does a good job.

OVERALL - The relationship between Amber and River is highly sexual, yet the sex scenes are relatively non-explicit. There is a fair amount of cursing and F-words and a small amount of non-graphic violence. Recommended primarily for females over 18, due to the romance and its sexual nature.

Although this is a good book I listened to, I've learned that series/sequels don't always measure up to the 1st book &/or movie.

K. A. Tucker does not disappoint

I really enjoy K. A. Tcuker's books as every character has their own story and yet they are all "related" in some aspect. In Chasing River, the sister of Jesse, the Sherrif's daughter goes on a world trip to expand her surroundings and while visiting Ireland she is an innocent bystander of a pipe-bomb. Her "savior" is not the typical man she would get involved with but their chemistry is too much for her not to pursue. This is a typical, easy-reading novel that makes me fall in love with K.A. Tucker's books as each one becomes available. They all have the same romantic notion but go deep into the character's feelings and develop their individual stories and story-lines. This book will not disappoint if you like this author.