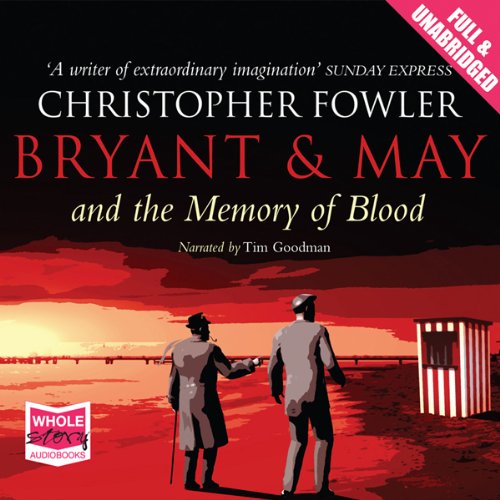 Bryant & May and the Memory of Blood

The death of a child and what seems to be a murderous puppet make a perfect case for Bryant and May and the Peculiar Crimes Unit. As John May and his team interrogate the suspects, Arthur Bryant heads into the secret world of illusions and stagecraft. As a second impossible death occurs, the detectives uncover forgotten museums and London eccentrics. The stage is set for a race against time with a surprising twist...

What a treat - a new Bryant and May

Wonderful to have the latest Bryant and May on Audible - the two aged detectives who began together in the 40's and are still solving crimes in the 21st century. This is the ninth book in the series so it may be helpful to listen to earlier ones like "The Water Room" or "Seventy Seven Clocks" to get used to the characters, but this book will certainly stand on its own.

Every book brings us a mystery with a central theme and strange and intriguing facts about it - this time the history, myths and anecdotes of the "Punch and Judy Show" and Mr Punch's arrogant evil is well explored in this marvellous twisting tale.

Meanwhile the Peculiar Crimes Unit continues to fight for its existence against the devious Home Office Security and we still cannot be sure it will survive. The team is gradually expanding and we get more involved with their different personalities and interaction.

Tim Goodman is the perfect narrator for this series, all his characters sound just right and his particular irresponsible, grumpy, but very likeable Arthur Bryant could not possibly be bettered.

Would you consider the audio edition of Bryant & May and the Memory of Blood to be better than the print version?

This is the first time I have listened to an audio version in this series . All of the earlier books were read in print form. Sometimes this series gets a little hard to follow, listening to it makes you slow down and hear every word. I loved it!

What does Tim Goodman bring to the story that you wouldn???t experience if you just read the book?

His reading brings the characters to life and makes them even easier to picture in the minds eye.

I want to marry Bryant and May

I LOVE this series of books. They are addictive. I dread the day when these guys have to die

If you could sum up Bryant & May and the Memory of Blood in three words, what would they be?

Another great Bryant and May mystery

What other book might you compare Bryant & May and the Memory of Blood to and why?

The other Bryant and May books - all have mysteries that reveal themselves slowly, the wonderfully eccentric Bryant and all the odd information that comes with his character. The history and the love for the scene and the players is a constant in this series.

Using different voices for the characters, adds to rather than intruding into the story.

Its one that I can't stop listening to.

The butler didn't do it, but did a Punch puppet?

In Christopher Fowler's Peculiar Crimes Unit series, the PCU is the red-headed stepchild of London policing, despite the fact that its case clearance rate is stellar and its budget tiny. The PCU's unpopularity with the police and government establishment is largely due to its chief, Arthur Bryant. Bryant is an ancient, shambling man in shabby and soup-stained clothing who is fascinated by history, the occult, and odd phenomena, but lacks any people skills or ability to deal with the real world.

In Bryant's world, phones malfunction after being smothered by toffee melting in his pocket, important evidence is tainted or goes missing, and entire buildings may be accidentally destroyed. After losing track of his car countless times, his solution is to make a habit of parking it in places that make people really angry, since that means when he's searching for it, people will remember having seen it. His way of dealing with a potentially troublesome journalist is to pretend to show her an iron maiden torture device, lock her in it and stroll off, forgetting all about her.

Bryant's principal colleague and best friend is John May, who is as dapper as Bryant is disheveled, and spends much of his time smoothing over ruffled feathers after Bryant has unfortunately been allowed to speak to witnesses or superiors. Other members of the PCU staff register on the misfit scale too, just at a much lower level than Bryant.

In the latest PCU book, Bryant & May and the Memory of Blood, the PCU is called in on a horrific case of the murder of a theater producer's infant son while a party was in full swing downstairs. What puts this crime within the PCU's remit is its circumstances. The boy was throttled and thrown out a sixth-floor window without anyone having witnessed any part of the crime. The boy's nursery door was locked from the inside, but there is no evidence of a person having been in the room or left it. The crime scene is turned from puzzling to grotesque and eerie by the Punch puppet on the floor near the crib, and the fact that the impressions on the boy's neck match Punch's wooden hands.

While the rest of the PCU interview the party guests (all theater people), construct timelines and analyze alibis, Arthur Bryant immerses himself in the arcana of puppetry, stage props and devices, and the history of the theater and of London buildings. He consults with carnies and Wiccans, and even a Victorian automaton of the seer Madame Blavatsky.

Bryant has a few other matters to distract him along the way. He and his housekeeper are being evicted from their longtime residence immediately––actually, it's only "immediately" because Bryant has spent months successfully avoiding paying any attention to the notices and his housekeeper's warnings. On another front, Bryant is dismayed when the appealing young woman who is helping him with his memoirs is killed, and a CD of highly inflammatory and top-secret material culled from the memoir goes missing. To round off the distractions, hints begin to appear that someone in government is taking steps to discredit the PCU badly enough to force it to disband.

Bryant is convinced that a psychological drama is being played out by the staging of the murder and the use of the Punch puppet. The killer is trying to send a message––but what is the message, and for whom is it intended? Bryant's conviction grows as other guests at the party are murdered; their deaths also bizarre and apparently staged with reference to the Punch and Judy plays. As more time goes by with no solution in sight, Bryant risks it all on one throw of the dice. He will have his murderer by midnight or retire.

There is nobody like Christopher Fowler for combining dark, even horrifying, crime with comedy. Within seconds after wincing at a description of a crime scene, you may burst out laughing at one of Bryant's scathing quips.

Despite the contemporary setting and the use of modern forensic tools, PCU books harken back to classic mysteries, where a careful analysis of the clues and the suspects' movements––and the ability to spot red herrings and deceit––allow the reader to engage in the detection of the killer alongside the PCU team. Bryant & May and the Memory of Blood also provides the bonus of a great deal of information about the history of Grand Guignol plays and puppetry. I never had any particular interest in those subjects before, but I was fascinated. Now that's the sign of a masterful writer.

Tim Goodman is a wonderful choice to narrate this book. His choice of a voice for Arthur Bryant is delightful and will be in my head when I read a hard copy of the book.

This is the ninth book in the Peculiar Crimes Unit series, but if you haven't read the previous books, you'll be fine starting with this one. Bryant & May and the Invisible Code, the next book in the series, will be published in the UK in August, and it sounds too good to wait for the US publication.

Love the intricacy of the Bryant and may stories. heartily recommend this book. narrator is excellent, also.

I can't get enough of Bryant & May. I try to make each book last longer but they always end to soon.

A Series That Has Perhaps Gone On Too Long

I really enjoyed the early books in this series. Bryant and May are delightful and eccentric characters. The touch of occult mixed with humor in the crimes they investigate make for an unusual and entertaining set of mysteries. BUT, I think there have been a few too many forays into their world. What was once fresh and unique has become rather predictable and formulaic. By all means, try "Full Dark House", "The Water Room" and/or "The White Corridor". Only those who cannot give up on Bryant and May should venture into this new addition to the series.