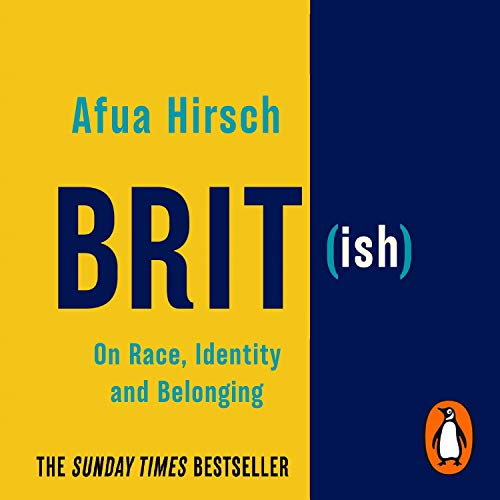 Random House presents the audiobook edition of Brit(ish): On Race, Identity and Belonging written and read by Afua Hirsch.

Afua Hirsch is British. Her parents are British. She was raised, educated and socialised in Britain. Her partner, her daughter, her sister and the vast majority of her friends are British. So why is her identity and sense of belonging a subject of debate? The reason is simply because of the colour of her skin.

Blending history, memoir and individual experiences, Afua Hirsch reveals the identity crisis at the heart of Britain today. Far from affecting only minority people, Britain is a nation in denial about its past and its present. We believe we are the nation of abolition but forget we are the nation of slavery. We sit proudly at the apex of the Commonwealth, but we flinch from the legacy of the empire. We are convinced that fairness is one of our values but that immigration is one of our problems.

Brit(ish) is the story of how and why this came to be and an urgent call for change.

"Brit(ish) is a wonderful, important, courageous book, and it could not be more timely: a vital and necessary point of reference for our troubled age in a country that seems to have lost its bearings. It's about identity and belonging in 21st-century Britain: intimate and troubling; forensic but warm, funny and wise." (Philippe Sands)

Brilliant - A MUST Read!

A MUST READ as Afua delves deep into the nuances, covert and overt displays of racism in the UK and the many challenges faced by Black Brits and immigrants.

Fantastic book well worth a listen

Really refreshing fanatic book whjch sums up much of the race issues that exist in the uk. Afua describes her experiences as a young mixed rac girl almost in search of her identity. All the time underlying what it is to be part of the new black british generation.

I feel Brit(ish) too!

If like many Londoners you have had this conversation while growing up you will appreciate Hirsch's perspectives around growing up Black British.

Often others won't see you as British despite the fact that your parents, grandparents and maybe their parents were all British citizens or British subjects or some combination of the two.

An excellent book about the search for identity which is well read by the author.

This is maybe the third book that I have written a review of in over 12 years of being an audible member. Definitely worth a credit.