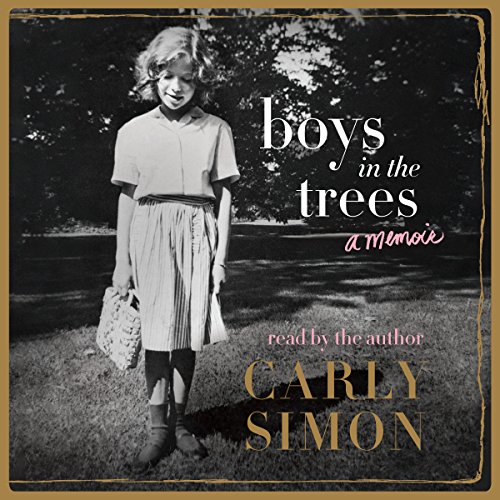 Boys in the Trees

Boys in the Trees

Simon's memoir reveals her remarkable life, beginning with her storied childhood as the third daughter of Richard L. Simon, the cofounder of publishing giant Simon & Schuster; her musical debut as half of The Simon Sisters, performing folk songs with her sister, Lucy, in Greenwich Village; to a meteoric solo career that would result in 13 top 40 hits, including the number-one song "You're So Vain". She was the first artist in history to win a Grammy Award, an Academy Award, and a Golden Globe Award, for her song "Let the River Run" from the movie Working Girl.

The memoir recalls a childhood enriched by music and culture but also one shrouded in secrets that would eventually tear her family apart. Simon brilliantly captures moments of creative inspiration, the sparks of songs, and the stories behind writing "Anticipation" and "We Have No Secrets", among many others. Romantic entanglements with some of the most famous men of the day fueled her confessional lyrics as well as the unraveling of her storybook marriage to James Taylor.

Includes original music composed especially for the program by Carly Simon and Teese Gohl plus a previously unreleased bonus song from Carly Simon.

"Carly Simon exuberantly narrates her memoir, which reads like a history of rock and roll from the 1970s onward. Simon's warm and personal style sounds as if she's telling her story directly to each listener." ( AudioFile)

Still trying to decide how I felt about it. On the one hand it was gorgeous. She reads it herself and the audiobook is interlaced with lots and lots of her music throughout. It has to be a completely different experience from reading it with eyes only. In many ways it confirms how sensitive and brilliant she is.

On the other hand it also seems like it was her attempt to come to terms with the fact that she has never come to terms with the failure of her 10ish-year marriage to James Taylor which ended in the early 1980's. Yet she was married again for about 20 more years to someone else, and unless I nodded off toward the end, there's not even a mention of that. There's something disturbing and downright pitiful about how she seems so determinedly stuck in the long-ago.

What would have made Boys in the Trees better?

I'm sure this is a great book, but I could not stand the random guitar and piano that would start out of nowhere and compete with the narrator's voice. It wasn't even background music and it had no dramatic effect because it would start and stop randomly. It was distracting and annoying so I didn't get far and will return this book. Still love Carly!

Beautifully written and narrated by Carly Simon. The book is scored to many of the songs she's written, thanks to the genius of Ken Burns. The music and lyrics enhance the story Carly shares. Interesting insight into her relationship with James Taylor--not the easiest man to love or live with. One of the best audio books I've ever listened to. This particular book demonstrates the power of an audio book over the printed version. So many feelings and subtleties are conveyed to paint a more vivid account of the events in her life. After all the years have past since her divorce from Taylor, you can see that Carly still has a place in her heart for James Taylor.

If you could sum up Boys in the Trees in three words, what would they be?

What other book might you compare Boys in the Trees to and why?

"Me" by Katharine Hepburn.

Who knew that she'd be as good acting out her life story on an audio as she is singing it out on a record? This is really wonderful. She's got a great voice for storytelling, her pace is spot-on and she brings you right into the story.

I usually find the childhood stories in biographies to be tedious, but this one really is colorful and is just as interesting as the rest. I like the first story of the book, and like glimpsing into the world of her dad, who was the Simon in Simon and Schuster.

I did not expect this to be as entertaining as it was. Listened all the way through and enjoyed the whole thing. She's honest about her flaws and strengths.

Loved the book; very open and sweet and honest and a great listen except for one thing: music was played during many parts of the narration, which made it (1) difficult to hear and concentrate on the narration, and (2) the tempo and mood of the music being played did not necessarily match what was being conveyed at the time. Very distracting and irritating. Made me wish I had the book instead of the audiobook.

What made the experience of listening to Boys in the Trees the most enjoyable?

I enjoyed hearing Carly's familiar voice and inflections, which ensure that the story is told as she would tell it to a friend (minus the few details she leaves out of the print version to spare the feelings of still-living family members and friends). While she "overplays the drama" (as Janet Maslin of the NYTimes wrote) sometimes in her writing, with a style slightly overdone, precious, and redundant (stringing together multiple metaphors to describe the same person or event in the same sentence), she is humble and self-effacing enough to prevent that style from seeming overly pretentious.

What was one of the most memorable moments of Boys in the Trees?

The story behind the writing/recording of her hit song You're So Vain...and all of her other celebrity conquests (or, more accurately, their conquests of her). As the title implies, there are a lot of boys, men, and sexual encounters OF ALL KINDS in this book...YOU WON'T BE BORED! One of my favorite moments was when she finished telling her therapist about the night before, which she had spent with Warren Beatty, and her stunned-looking therapist replied.....but NO! That would spoil a hilarious story for you, if I revealed the punchline here.

The singing!! I hadn't known there would be any, and that was a nice surprise.

There are some laughs, some "Oh my ---" jaw-dropping shockers, and some times when listeners who have had some of the author's same experiences might be moved to tears. I felt as if anyone who has ever been through a difficult breakup could relate to the author's pain surrounding the terrible times in her own marriage and divorce. She made that pain especially palpable, as if it is still fresh to her and she has never really gotten over it.

One thing this book MIGHT make the reader feel is a little bit disgusted by the hyper focus on sex. Honestly, as the child of sexually wild parents, and as a little bit of a sexually shy, somewhat sexually conservative person myself, I sometimes found this aspect of the book hard to swallow (pun acknowledged). Let's put it this way: If you are a true social conservative, you should be forewarned that you will probably actively dislike much of Carly's memoir...and if you're a sexually liberated former flower child you may very well love it!

I ended up very much wishing that this memoir had covered all of Carly's life, continuing to the present, not just up until her split from James Taylor. Perhaps there will be a second volume??

This one makes my top 5. The story she has to tell is riveting at every stage. The musical background is very well done and makes it really wonderful as an audible book. Carly is admittedly nervous as a narrator, so I loved hearing her explain that before listening to this book. She's not a professional narrator, but I only thought that added to the authenticity of the memoir. Her story is not a moral guideline of how women should live their lives, but she surely has lived an extraordinary and full life. I enjoyed it so much. I only wish James Taylor would be her friend now, then maybe she could let it go. She adores him maybe more than he deserves.

What would have made Boys in the Trees better?

I chose to return this book after the second chapter because of the distracting loud music that was randomly interspersed through the reading. There seemed to be no rhyme or reason for the music- suddenly music begans playing at the same decibel as her voice so listening was an arduous task for my brain. It was so annoying that I cannot tell if I liked the book or not. This was mostly piano music- I began to dread what would happen later when the story describes the 60's! This one is better to read than hear!

I chose this book because Carly Simon was reading it herself, and I have always loved her voice. She did not disappoint, reading with a wistful softness. Her life has been filled with privilege and opportunities, yet she is candid about her anxiety and--something I never knew--her stutter. (Another great book about a stutterer is David Mitchell's bildungsroman "Black Swan Green"). Her childhood was fascinating, filled with artists, writers and musicians who visited her famous but troubled father. Her brief career as a rock star is amusing, and it was fun to hear about how she wrote songs like "You're So Vain." There are a couple of suspenseful set pieces toward the end, as her failing marriage to James Taylor tears her up.

The audiobook includes a lot of guitar strumming and piano, which tended to be distracting. Sometimes I could not follow what Carly was saying because the music was too loud. But this grew on me, and by the end of the book I was moved by the new songs she sang, new to me at least, including the Walt Whitman poem O Captain! My Captain set to music.

An intimate view inside a very private person

Carly, I’ve admired you since I discovered your music in the early 70’s. You lay bare your soul in this book, exposing yourself naked and vulnerable and for this I applaud you as brave beyond words. May you find peace.