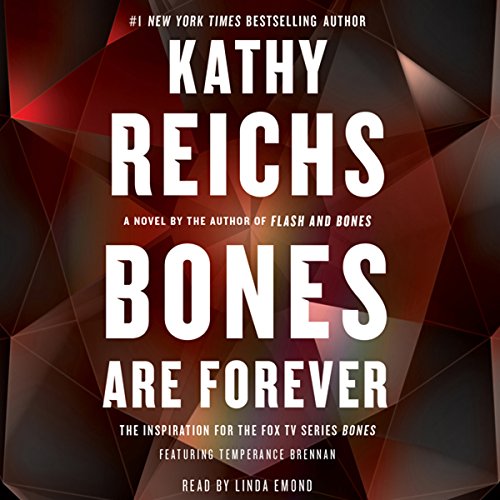 Kathy Reichs, number-one New York Times best-selling author and producer of the Fox hit series Bones, is at her brilliant best in a riveting novel featuring forensic anthropologist Tempe Brennan - a story of infanticide, murder, and corruption set in the high-stakes, high-danger world of diamond mining.

Temperance Brennan has been asked to examine the corpses of three dead babies in Montreal. It’s a difficult assignment, complicated further by the fact that her long-time flame Detective Ryan is investigating the infants’ mother, a former (and possibly current) prostitute. When the woman flees to Edmonton, the investigation is joined by Royal Canadian Mounted Police sergeant with whom Tempe had an ill-advised fling over a decade earlier. The dissonant team heads to remotest Yellowknife - mining country - to pursue an ever more sinister trail.

With the Fox series Bones in its seventh season and her popularity at its broadest ever, Kathy Reichs reaches new heights in storytelling and suspense-building. Bones Are Forever shimmers with sexual tension, crackling dialogue, and the thrilling twists Reichs delivers so well.

Temperance Brennan lives up to my expectations

Where does Bones Are Forever rank among all the audiobooks you’ve listened to so far?

I love Kathy Reichs so this book is right up there among my favorites. It is my first audiobook of her stories and I will be back for more.

Her plots are always intriguing and exciting. This one didn't grab me like some have but it was very good.

Yes I liked her performance. This was my first book read by her. So far my favorite is Davina Porter but not everyone must be a master or mistress of complex dialogs. Ms. Emond was very good.

No. It held my interest and I will be listening to it again.

WOW-one of the best in a while

There isn't a Tempe book I don't like, but some are better than others. This is one of them. Went by way too fast. I especially like the stories that stay in Quebec but this one venturing out to Western Canada was great. Bringing in the little mentioned First Nation's People and the rape of the world by billion dollar companies.

Depends on what you enjoy

If you like history/geology/sociology, you will enjoy this. When the story sidetracked into this type stuff, I was bored and would lose the story line. I want to read/listen to the story, not the history of diamond mines or whatever. I know authors often do a lot of research and want to make use of it, but minimal setting for the story is preferable to me.

The basic story line is interesting and kept me listening, but I'd find myself tuning out at times. What I enjoyed from the book could have reduced the book by half.

I also don't think it's necessary to be quite so gruesome.

I've read 3 or 4 of the books by the author. I probably won't buy anymore. Just not my style.

This series of books/audiobooks has been around a while so I can't definitely rank this newest one. However, Bones are Forever does fit among the best. Ryan and Brennan team up again. This time they head to Edmonton and Yellowknife. The plot has unexpected twists and turns, as do the relationships between several characters. The narrator makes book 15 a pleasure to listen to.

I am a huge fan of Kathy Reichs. I've read all of the Brennan books and find that while some are better than others, she has done a nice job of not letting the characters get too stale even after 15 books. This story wasn't bad but it felt a little contrived, the ending a little too pat. I didn't like Emond in the beginning but she grew on me. I'm not sure that I will be hunting for more of her books yet but she makes a good Brennan.

I am a big fan. I wasn't disappointed. Reiches always delivers. I will continue to buy every book she writes!

I couldn't put it down

Where does Bones Are Forever rank among all the audiobooks you’ve listened to so far?

I've enjoyed all of the Brennan series by Kathy Reichs.

Brennan continues to be my favorite character, very real. After 28 years as a CSI I can relate to the language and situations.

Which character – as performed by Linda Emond – was your favorite?

I've only listened to Ms. Emond narrate the Brennan series of books. She made each character in the book real.

Continue the fine work. I look forward to the next book in the series.

If you could sum up Bones Are Forever in three words, what would they be?

Love Kathy Reichs, and this book doesn't disaapoint. Wish she should write falster!

Which character – as performed by Linda Emond – was your favorite?

She does a great job!

This is an ad, don’t pay for it

I’ve quite enjoyed this series, but this isn’t part of it. This is a short-story designed to forward the author’s opinions about puppy mills and to raise support and awareness. I’m no fan of puppy mills and generally agree with the author’s points; the story was also fine. I’m just annoyed that I paid for it.

I imagine that people in poverty speak like Kathy Reich's characters! Once again, very believable!