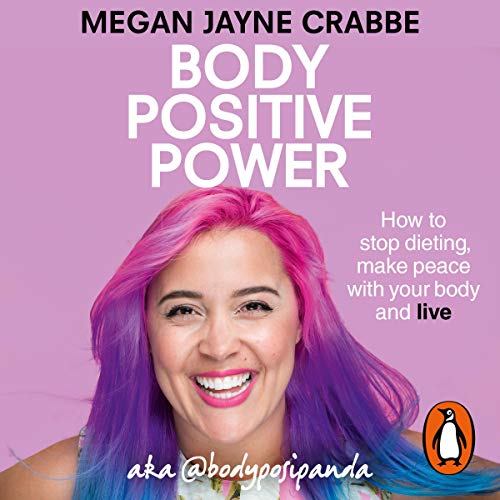 If you're tired of being at war with your body, then this audiobook is for you.

We've been convinced that happiness is something that comes only once we hit that goal weight, get those washboard abs, shrink ourselves down and change every part of ourselves. We believe that our bodies are the problem, but this is not true. It's how we've been taught to see our bodies that's the problem... it's time for us all to stop believing the lies we've been fed about what it means to be beautiful and take our power back.

Megan's body image issues began when she was five years old. She spent her childhood chasing thinness and at 14 found herself spiralling into anorexia. After recovery she spent years dieting, binging and losing and gaining weight. But then she found body positivity, quit dieting, and finally escaped the cult of thin. Now she's determined to let as many people as possible know the truth: that we are all good enough as we are.

With her inimitable flair, whip-smart wit and kickass attitude, Megan argues for a new way of seeing ourselves and a world where every body is celebrated. Where there is no such thing as a 'bikini body diet' and 97 percent of women don't hate the way they look.

A powerful call to arms as much as it is inspirational and practical, this audiobook is the life-changing answer you've been looking for.

I loved this book. Megan tells the hard, fucked up truth, but with so much love and compassion. I fell in love with her, and everyone in the world. And I'm also furious. Furious and filled with love.

It's inclusive, intersectional, feminist and fun! And it has changed my life.

One of the most important books I’ve listened to

I have nothing bad to say about this book. I will try to become a member of the body positivity community. Starting right now!!

Everybody should hear this book!

I really love this book and whould recommend it to everyone I know. i think the topic is extremely relevant, even just to give an understanding on how the standards on bodyimage can have an effect on all types of people.

thank you so much for writing this book.

Surely one of the most important, soul warming and healing books of my life.
Thank god for you, Megan Jayne Crabbe.

Beautiful. Miss Megan has a warm radiant voice that hugs your ears and explains to you in extremely well researched manner the ways you've been taught to hate your body. I will recommend this book to everyone I know. With all the diet and body hate messages we're exposed to every day, this book is an important and frankly necessary counter weight. Inspiring and thought provoking 10/10

Every single word made me happier and more confident! Would absolutely recommend! Thank you for that

such a positive outlook is very refreshing and is a great listen! especially if you're in need of a pep talk :)

EVERYONE MUST READ OR LISTEN TO THIS

This book has the power to set you free, and I'm not exaggerating. Megan has done extensive research and makes incredibly good points. I'm currently sending copies of the book to all my friends and family, I want them to live a good life without self-hate and dieting as well.