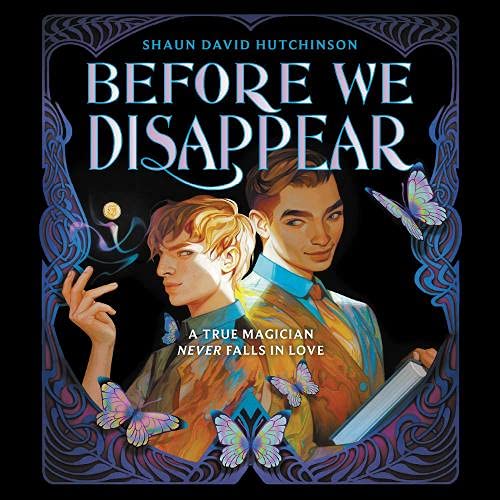 It’s a new star-crossed romance about the magic of first love from the acclaimed author of We Are the Ants and Brave Face, Shaun David Hutchinson.

Jack Nevin’s clever trickery and moral flexibility make him the perfect assistant to the Enchantress, one of the most well-known stage magicians in turn-of-the-19th-century Europe. Without Jack’s steady supply of stolen tricks, the Enchantress’ fame would have burned out long ago.

But when Jack’s thievery catches up to them, they’re forced to flee to America to find their fortune. Luckily, the Enchantress is able to arrange a set of sold-out shows at Seattle’s Alaska - Yukon - Pacific World’s Fair Exposition. She’s convinced they’re going to rich and famous until a new magician arrives on the scene. Performing tricks that defy the imagination, Laszlo’s show overshadows the Enchantress, leaving Jack no choice but to hunt for the secrets to his otherworldly illusions. But what Jack uncovers isn’t at all what he expected.

Behind Laszlo’s tricks is Wilhelm - a boy who can seemingly perform real magic. Jack and Wilhelm have an instant connection, and as the rivalry between the Enchantress and Laszlo grows, so too does Jack and Wilhelm’s affection. But can Jack choose between the woman who gave him a life and the boy who is offering him everything?

It’s a stirring tale about the magic of love from award-winning author Shaun David Hutchinson.

I was so bored and annoyed halfway through I couldn't make myself finish. It feels ploddingly didactic about social issues and like the author wants to show how woke they are. But then why are the only people who are introduced by race black, and everyone else has an actual physical description. And there's strange phrases like how Jack goes to fit in among the "working class" crowd, and again no descriptor. So we are meant to assume that they are dressed shabbily? And the "hook nose" lawyer guy, dude, that's an old school anti-semitic stereotype. Are you kidding me with this?

Also, halfway through there was still zero character development and repeated unrelenting descriptions of severe abuse that seem disproportionate to the story somehow. Like, I get it, the bad guys are bad. Get on with the plot. Could have been a good story with an original plot, but nope.

This book was so wonderful I ended up completely emerged. I truly felt for the characters and wanted to jump into the book itself and protect some of them from the tragic situations they were placed in.

A Beautiful work of Fiction

I absolutely ADORED this story even with its flaws. it was heart wrenching and I couldn't stop for even a second! The villan is perfect and believable and it felt almost real! I hope we can get a short story to round this off but it was perfect.

the author note made me cry. We are here. We are valid. We deserve love.

I loved this novel and the story it told. it kept me interested enough to listen in every stolen moment I could find. My only problem i could say I found was that, for a novel that took liberties with the reception of sexual orientations during the period, the author still found a need to include racism? I honestly can't think where the racism was needed. it's a fine line of "do we acknowledge that racism was a thing back then or choose to do the same we did with homosexuality with this story and say fuck it no racism?" I'm not one to really make that call but it did stand out to me that women talked of being doctors and detectives and queer couples were able to be out in the open....but to be black was a stigma? My brain caught on that, I suppose.

This young adult story took a real historical context and told a beautiful tale of cherished caring between LGBT characters with a magical finish.

this felt like the smell of popcorn - makes you feel this giddy anticipation for magical moments
i loved this!