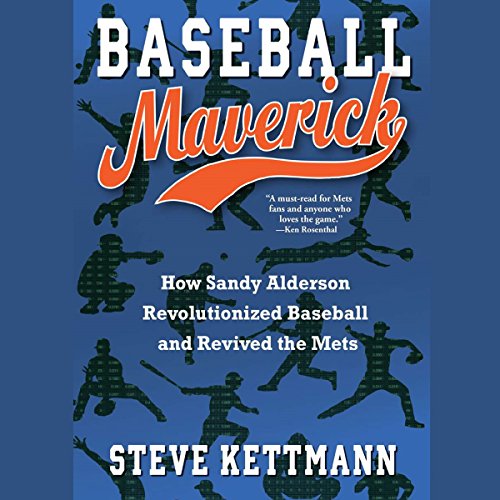 In 2010 the New York Mets were in trouble. One of baseball's most valuable franchises, they had recently suffered an embarrassing September collapse and two bitter losing seasons. Their GM had made costly mistakes. And their principle owners were embroiled in the largest financial scam in American history. To whom did they turn? Sandy Alderson, a former marine who served in Vietnam and graduated from Harvard Law.

In 1981 Alderson started in baseball with Oakland, where he led a revolution in the sport. The A's partnered with Apple, pioneered using statistical analysis, and became a powerhouse, winning the 1989 World Series. When new owners slashed payroll in the 1990s, Alderson's under-the-radar creativity and intelligent management were thrust into the spotlight.

Granted unprecedented access to a working GM over several seasons, best-selling author Steve Kettmann traces Alderson's history and his renewal of the Mets despite a limited budget, through big trades that brought back high-profile prospects, to the development of young aces including Matt Harvey, Zach Wheeler, and Jacob deGrom. Now the turnaround is almost complete. Baseball Maverick is a gripping, behind-the-scenes look at a Major League team and a fascinating exploration of what it means to be smart.

Yes this is the story of a baseball executive who is a graduate of Harvard law school, and was a Marine Corps Pilot in Vietnam. So if any of those things are interesting to you, then this book is one you might want to give a shot. Since he's worked in baseball since 1981 that's the main subject covered by this biography of a remarkable man. It's a bit longer and more detailed about long ago baseball seasons than it needs to be for audio, since it's very difficult to skim audio. Then their is the problem with just about every audiobook done on sports; though this narrator, L.J. Ganser mispronounces fewer names than the usual actor who reads a sports book there are still too many. It's seemingly an impossibility to find narrators who are sports fans, or audio editors who are able to catch their miscues. Still this is a pretty good listen if you into sports.

Mostly good, but goes off topic at times

Sandy makes for great subject matter and the author does a great job of going over his life and all the work he did for the A's and Mets. Sometimes though he goes a little bit of a tangent. For example, I think just because he got into Sandy's A's days, he started talking about the steroid age and just dwelled on it for too long.

Other than that, great work and narrator does a great job too.

What was one of the most memorable moments of Baseball Maverick?

Have the narrator learn how to pronounce the players names correctly - he butchered quite a few of them.

When it spoke about how much Sandy cared about baseball.