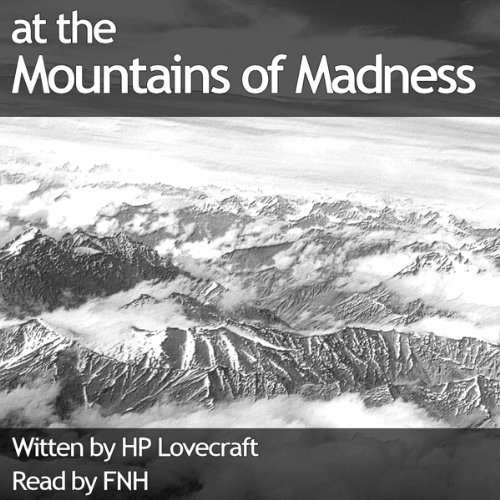 At the Mountains of Madness

FNH Audio presents a complete and unabridged reading of H.P. Lovecraft's famous story "At the Mountains of Madness". The story is related by one of the two survivors from a polar expedition. Unlike other polar explorers who may have died from cold, starvation or simply getting lost, in this story things are somewhat different.

The survivor is desperate to prevent a new polar expedition because there are "beings" there, strange murderous beings. There are things that man should not see beyond the recently discovered mountains at the pole. Scientists listening to the story told by the survivors have assumed that the teller has gone mad because what they describe just cannot be. Or can they...

IMPORTANT-- This would be 4.5 stars IF it didn't have the HORRIBLE, LOUD, STARTLING music every 15 minutes, interrupting the story. The narrator is good enough. The story is VERY cool, especially for how old it is. But, seriously, the music will come out of nowhere and scare the CRAP out of you!!

Would you try another book from Howard Phillip Lovecraft and/or Felbrigg Napoleon Herriot?

Possibly. This is the second Lovecraft book I've tried and while the stories show great promise with their ideas, the actual telling of them makes them fall short of the mark. Lovecraft uses seven words, when two will do. This makes for an extremely frustrating listen as I wanted him to do was get to the damned point and go on with the story. The look started out strong. The plot moved forward at a nice pace and had me glued. However when Dyer and Danforth start their exploration of the lost city, the pace grinds to a crawl as Lovecraft tells us the history of the Elder Ones and the Shoggoths. While this information is welcome and necessary, it goes on for ages. The whole second third of the book focuses on this and there are whole chapters that consist of Dyer musing on these facts as he and Danforth move from room to room. By the time the book approached the end, I just wanted it to be over.

What was one of the most memorable moments of At the Mountains of Madness?

The discovery of the Elder Ones and the mystery surrounding them. I particularly enjoyed the sense of foreshadowing they gave as the dogs couldn't stand to be near them. You knew something was going t go terribly wrong.

Would you listen to another book narrated by Felbrigg Napoleon Herriot?

Maybe. I found Herriot to be very underwhelming. Perhaps this is due to the way the book was written. But there was hardly any emotion to his performance.

Most definitely. Guillermo del Toro has been trying to make this movie for over a decade. I firmly believe that it would be far more entertaining as a movie, and if del Toro made it, you could be assured of brilliant creature design and effects. He also knows how to create that sense of the weird and disturbing.

I would have liked to hear more of the monstrous beings in the higher mountain range that even the Elder Ones were afraid of. The mystery surrounding these hardly-mentioned horrors intrigued me greatly.

You'll want to listen to this again and again

Where does At the Mountains of Madness rank among all the audiobooks you’ve listened to so far?

This isn't a fair question... I've listened to some amazing works. But this book is definitely average or above average.

What was one of the most memorable moments of At the Mountains of Madness?

I really enjoyed chapters 8 and 9, which focused on history. (I don't want to spoil anything by saying more.)

Have you listened to any of Felbrigg Napoleon Herriot’s other performances before? How does this one compare?

I haven't, but I loved his accent and the realistic expression of hesitance that he lent to the work.

It was a bit hard to get into for the first quarter or half, but after that, I did want to listen all the way to the end.

As always, I enjoyed how Lovecraft tried to make his story seem plausible. It makes strong references to real geography and biological science (at times, using terminology that is a bit too technical for casual readers though). There's also some twists that you probably won't see coming, which is always a thrill for someone who can usually guess plot twists in advance. The chapters on "history" were a favorite for me (don't want to spoil anything though) and there were lots of gory bits that you can sit down and ask yourself, "What if this was real and actually happened to me," freak yourself out.

However, the story does have a slow start and Lovecraft's unusual descriptive style (e.g. describing a sunset as "grotesque." It also continues his habit of uncomfortable ideas on race, but at least this time it's not talking about literal, human races.

Overall, it's a great read with great narration - just wish it had a bit less music.

Would you listen to At the Mountains of Madness again? Why?

This is the genisis of all those stories like The Thing, Alien vs Preditor. There is nothing like discovering where all the great sc-fi horror has come from. This is the seed of so much of what I have read in the last 20 years. In the begining there was Lovecraft.

A great book and fine performance

This has been my favorite Lovecraft story ever since the first time I read it around 40 years ago. It provides the range of Lovecraft’s world in an extended composition.

Also, I think Herriot nails the reading again. There is something about his voice that does it for me, on some but not all, of his Lovecraft recordings that I have listened to. None are bad. It is just that some don’t have the chemistry to make them exceptional. But, this one has the chemistry. It is exceptional.

I think he has learned some things while doing these readings. He is better at providing appropriate breaks between chapters. In other recordings he rushes it to much, to often..

He has music between sections. It is okay but the selections are starkly cliched.

This reading of at the Mountains of Madness is far superior to HPL society's. Very professional.

The narration is too fast .90 of speed sort of fix it but certain sounds prevent it from being listened louder

You get what you pay for

This is the cheapest edition you can get on audible, and it shows. the recording quality was about the quality of a average free librivox reading, but with terrible , very loud, music thrown in the mix every time things get dramatic or a new chapter starts. But the narrator and story makes up for that with a vengeance, despite bad editing. If you can put up with it's flaws, it's well worth the buy. it's definitely one of my favorite books. One more caution, h.p. lovecraft is an amazing storyteller, but very racist. it's not too bad in this book, but be warned about it if you easily offended and want to read his other works.

Would you try another book from Howard Phillip Lovecraft and/or Felbrigg Napoleon Herriot?

Probably. FNH did a good job. However the story was so tediously filled with details that it detracts from the events and ruins its premise.

What could Howard Phillip Lovecraft have done to make this a more enjoyable book for you?

He could have added more momentum to the story. He hints of horrors and scares throughout the book, but never gets there. I did find only a single scene near the begining as somewhat scary.

What about Felbrigg Napoleon Herriot’s performance did you like?

He has an academic pronunciation which suits the story perfectly.

The level of detail in this book is tedious to say the very least. Did not enjoy it.