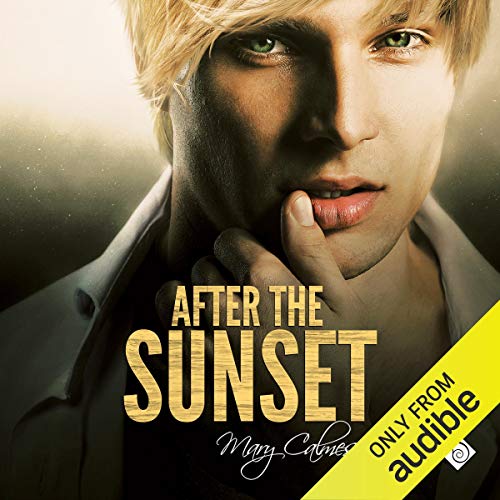 Two years after riding off into the sunset with ranch owner Rand Holloway, Stefan Joss has made a tentative peace with his new life, teaching at a community college. But the course of true love never does run smooth. Rand wants him home on the ranch; Stef wants an exit strategy in case Rand ever decides to throw him out. Finally, after recognizing how unfair he's being, Stef makes a commitment, and Rand is over the moon.

When Stef gets the chance to prove his devotion, he doesn't hesitate - despite the risk to his health - and Rand takes the opportunity to show everyone that sometimes life's best surprises come after the sunset.

I have been waiting impatiently for this book to come out in audio format since Timing was recorded, and it's finally here!
Some of the best lines Mary Calmes' has ever written is in this book. And Sean Crisden is a great narrator. It can be heard as a stand alone story, but it's so much better as a followup to Timing.
Love this book!!

Hell yes! It was just so much fun, I laughed out loud more than once, and Sean Crisden did a fantastic job telling this story.

Stefan! He is unapologetic and fierce and loyal and really enjoyed following his antics throughout the story.

Which character – as performed by Sean Crisden – was your favorite?

Rand. His cave man mentality might have been off putting were I reading the story, but Crisden gave him this gruff, domineering tone with that sexy southern drawl, and that coupled with his attitude made him a very endearing character.

If you could rename After the Sunset, what would you call it?

Why mess with perfection?

Stefan and Rand are adjusting well to their life on the ranch now that Stef has taken a job closer to home so that he can spend his nights at the ranch with Rand. But Rand’s more traditional family is still having reservations about the relationship, so when several of them show up at the ranch, with a leggy lady in tow to “temp” Rand, it doesn’t end well. Then Stef gets a call from an annual rodeo and learns that if the ranch doesn’t participate, they loose part of their land rights. Not wanting to put anything else on Rand’s plate right then, Stef rounds up some of the hands and heads off to the rodeo to try and save the day, Prada boots and all!

While the hands at the ranch have not only accepted the relationship between their former ornery boss and his outgoing boyfriend, they welcome it, not everyone at the rodeo has the same outlook on things. Animosity and ignorance run deep, and Stef is about to get a crash course in wranglers, ropers and bull riding. The issues isn’t whether or not Stef and the guys can save the ranch. It’s whether or not Stef can keep his activities a secret from Rand, and make it home in one piece.

I had not read or listened to the first book in this series, but I assure you, I never felt like I was missing anything. Calmes did a great job of making sure that the history I missed was still conveyed throughout this story. While this is a fun love story at heart, it is also a story about family and determination that is told with the author’s usual dry, witty sense of humour and three dimensional characters. It’s hysterically funny while still having an element of seriousness, but more than once I found myself laughing out loud at the shenanigans Stef was bound to unearth no matter where he was. Just a fun, light hearted, fast paced story.

Narrated by Sean Crisden and let me tell you, this was probably his best performance to date, and I have listened to a lot of his narrations. There are dozens of characters in this story and Crisden made sure that every character, no matter how inconsequential they were, had their own unique voice. Rayland was gruff and stubborn… Stefan was personable, fun and light hearted while being unapologetically gay and fiercely loyal to his new family… and Rand, he has this cave man mentality that kind of makes him endearing. All he wants is for his ranch to be successful so he can take care of his family, to come home to Stef every night and wake up to him every morning. There are a couple times in the story when a question is put to Rand, a choice if you will, between Stef and the land or Stef and some other materialistic thing, and each time Rand chose Stef without hesitation. So while he is big and loud and domineering to an extent, he is unabashedly in love with Stef, and it shows.

Fans of Calmes Matter of Time series will surely love this story, as Rand and Stef have a lot of the same characteristics of Sam and Jory, but without all the life threatening I forgot to breath for a minute seriousness of that world. Definitely a must read, and if you are looking for something that will be like juicy fruit for your ears, grab the audio!

Another great follow up story from a fantastic author..
And another great narration from Sean
Can't wait for more fantastic stories

Book 2 complements and concludes a beautiful love story that is believable and victorious!! Absolutely Spectacular Read!! I listen to both books over and over again.

If you could sum up After the Sunset in three words, what would they be?

Have you listened to any of Sean Crisden’s other performances before? How does this one compare?

I love all his narrations. He can make a bad book great!

Cute and cheeky continuation of Timing. Wish it was longer and hope there is another continuation. Lots of feels. and Sean Crisden sounds so gud.

I think this book suffers from a poor cover choice in that it does not match its predecessor Timing and the Title and labeling don't indicate it is even a sequel. I only realized these was a sequel because I visited Mary Calmes website. I would have bought it much sooner had I known.

Should be called "The drama of the Halloway's". If you loved the way the first book ended, I would skip it and save a credit.

Glad I didn't have to wait too long

Let me start by thanking whoever is in charge of the book/audio cover. I honestly passed up book 1 of this series Timing for a long time because of the crappy cover. This cover helps a great deal with the audible, it's the simple things sometimes. Well we have Stefan and Rand trying to deal with the more realistic part of their lives where everyone is not so happy to have a powerful ranch run by a gay couple. They soon learn these guys are hot/sexy and serious about their relationship and their ranch and family. There are a lot of characters in this book and you will enjoy them all.

Love this sweet, funny sequel. And seems to me there is potential for a third in the series. Sean, as usual, is so smooth that you are sucked into the story and don't even realize someone is...not merely reading, but performing the story for you! You guys make one hell of a team!

Stef and Rand are wonderful together.
Great re-read.
Highly recommended.
If u love cowboys u can't miss with Rand.