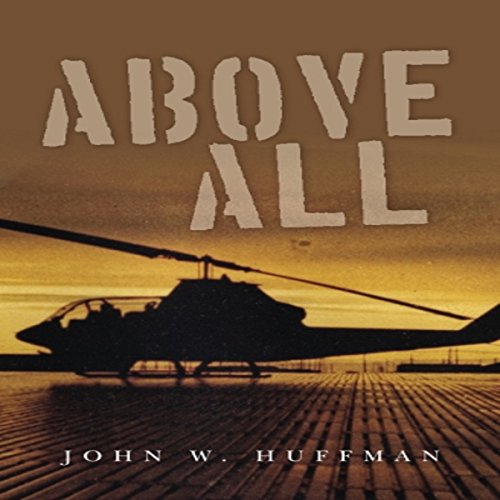 A finalist in the Action/Adenture Fiction category of the 2011 Next Generation Indie Book Awards.

Above All, the third of the John Jospeh Sharpe trilogy series following America's Diplomats and Eyes of the Blind, is a lighthearted action-adventure historical fiction set in the waning stages of the Vietnam War. The story which pits a consummate warrior against the political strangulation that rendered our armed forces virtually incompetent. It is a comical but sordid tale of a roguish gunship pilot and his nemesis, a petty commanding officer, who loathe each other at first sight. As fierce adversaries, they encompass the chaos of that era. They're accompanied by a coven of nurses and a clandestine army of misfits who portray the best and worst of our country during that painful event. Their saga is one of love and lust, hope and despair, valor and cowardice, awash in a deluge of demoralizing apathy as they face the bitter ending of the conflict.

Great story, not so narration.

A very good story but the narrator falls a bit short. All-in-all, well worth the time!!

I could not stop listening. Well worth listening or reading. Keeps your attention at every chapter.

Would you listen to Above All again? Why?

Yes in a heartbeat

LT. Sharpe and his wacky crew

The whole book was great

Who was the most memorable character of Above All and why?

Red One Seven, Sugar Bear aka LT. Sharpe, was an unforgiving merciless soldier. As long as one of "OUR" American soldiers needed help his aircraft was ready and willing

I was provided this audiobook at no charge by the author, publisher and/or narrator in exchange for an unbiased review via AudiobookBoom dot com

Very slow moving book, but in the end it wasn't half bad. I wish there was a little more substance to the writing and narration. Having said that, I would look forward to reading and listening to more by this author and narrator.

I was provided this audiobook at no charge by the author, publisher and/or narrator in exchange for an unbiased review via Audiobook Blast.

Although it began a little slow for me, I understand the need to get each of the characters identified. Once the characters are in place the book becomes one of those that you unable to put down until the end. There is not an emotion that goes untouched. Many, many kudos to Mr. Huffman!

Good story from a historical perspective but when you write about history. Then you can't have an unpredictable ending. Could be developed into a Series like Mash in Vietnam with a little effort.