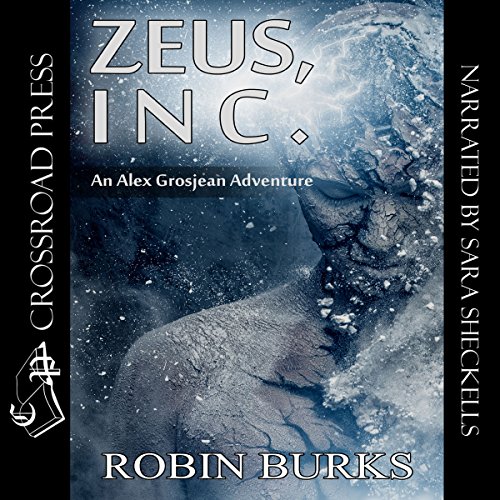 Fifty years ago, Zeus, Inc., and its CEO, the mysterious Joseph Brentwood, saved the world from a major energy crisis by discovering a new unlimited energy resource. Now, in 2069, Mr. Brentwood has gone missing, and private eye Alex Grosjean has been hired to find him by his daughter (and Alex's best friend), Aleisha.

Blackouts begin to occur all over the world, and somehow, Alex believes it's tied to Mr. Brentwood's disappearance. Her search leads her through her own murky past and into the fantastical depths of Hell itself, where she discovers that Mr. Brentwood is not who or what he seems to be.

With the help of an otherworldly man named Pip, Alex must save both Mr. Brentwood and the world. But will she be able to face her own guilty past in order to do it?

Interesting story with a good narrator

What did you love best about Zeus, Inc.?

The narrator made the book more interesting for me then if I read the book.

Again a similar question I would not have had the same interest if I simply read the book.

For me the narrator is the most important element in this book.

It starts out as a crime drama, the main character haunted by her old demons as she helps a friend investigate her missing father. Suddenly, the story takes a twist into a completely different topic. Enjoyed the whole audio with great narration

“Zeus, Inc. (The Alex Grosjean Adventures Book 1)” is not lesfic, but it’s almost everything else: detective mystery, SciFi, greek mythology, and hetero romcom with a bit of fade to black sex.

Readers/listeners follow along with MC Alex as she is brought in to find a missing person: the CEO of the biggest company on earth, who is the father of her best friend since childhood: Joseph Brentwood. I think listeners of “Zeus, Inc” will enjoy the story much more than readers. The narrator did a fantastic job making the somewhat ditzy and incompetent Alex enjoyable to spend time with, and for us to be inside her frequently rather muddled brain as she shares her thoughts with the audience.

Though frequently likable, and almost always entertaining, Alex isn’t a clearly defined character. She lives at home with her 80yo mother, so Alex must be somewhere around 50yo. Yet, she generally has the attention span of a squirrel. Well, that might be a bit harsh…let’s allow her having the attention span of a squirrel with an acorn (one second vs. four minutes, fyi). The book opens very promisingly, with Alex looking at cat pictures on the internet instead of doing any real work, and with a 10yo neighbor boy pestering her. It’s a cute beginning, and the initial portrait of Alex is definitely likable.

A former police detective forced out for digging too hard into a case her brass wanted left alone, Alex is now a PI. She’s not a particularly successful PI, though; she pretty much lives payday to payday and is always short of money. Yet, her best friend decides she’s the very best person to find her missing father. Nice to have a friend who believes in you, but….really? Alex proceeds to drift along and wait for a clue to bite her in the, err, that is….between frequent naps she stumbles upon interesting characters who turn out to be important to the case, and eventually notices clues that are frequently biting her.

Alex is initially suspicious of CEO Brentwood’s head of security, Pip, who doesn’t want Alex on the case. Now, you would think she’d question him about how Brentwood might have disappeared while surrounded by his security detail. I kept hoping she would, after a nap or two…after all, with a missing person case there’s really no need for a sense of urgency, is there? Well, Pip has Alex kidnapped and roughed up, so she develops a liking for the big goof and begins sleeping with him. What?? Now that’s an unusual interview technique.

Well, people begin turning up dead, killed in unusual ways, so the story moves from detective crime into a greek mythology phase. Alex learns that the greek gods are not only real, they’re closely involved in Brentwood’s disappearance. Alex is alternatively oddly accepting and calm about being surrounded with gods, and with being completely flabbergasted and gushing like a pre-teen at a concert.

Well, greek gods being greek gods, they argue and battle amongst themselves, they kill mortals, and they look to Alex for counsel and leadership, and Alex solves the case and saves the day. What??

The SciFi aspect of the book, btw, is that events take place 50 years in the future, there are self-driving cars, and thanks to Brentwood and his company, Zeus, Inc., there is unlimited clean energy available. Until he goes missing. And then power starts failing. I’m not sure what all the employees at the worlds biggest company do, because without Brentwood there is no power. Naturally, people begin panicking and rioting and looting just as soon as the first cars stop working.

Well, Alex eventually realizes that another guy in the book is flirting with her, and the book ends with a teaser for a sequel.

“Zeus, Inc.” was the first novel by the author, and it was mostly lots of fun, but the multiple genres didn’t always mesh smoothly. The most annoying thing was waiting for Alex to catch up with the reader/listener after having obvious clues presented, but the story was very creative and with only a couple exceptions, moved along quickly.

The best part of “Zeus, Inc.” was the very enjoyable narration. The paperback was published June of 2012, and the audiobook was released February of 2018. The sequel, “The Curse of Hekate” was published in October of 2013, and I would expect that some of the flaws with Alex’s characterization would be smoothed out, and that the author would be less tempted to throw everything she could think of at the reader. After learning what sticks, she would have an opportunity to write a tighter narrative.

Both books (and a third, “Return of the Titans”) are available on Kindle Unlimited. I hope the other books in the series also make it to audio, and I really hope that Sara Sheckells returns as the narrator.

3* for the book, with an extra star added for the terrific narration, so I do recommend the audiobook with a 4* rating.

My rating and my review was not in anyway affected by my having been provided a review copy.

The book feel really underwhelming, from the story, to the plot twists, to the narator. It wasn't terrible, but I just didn't feel any connection to the charachters or any investment in the outcome. Maybe some will find it entertaining and original, but for me I just got bored. By about 2/3 of the way through I wanted to walk away. I can't really think of anything else to say about it.

I received this book for free in exchange for a fair review.

The storyline is what made me decide to try this book regardless of the negative editing reviews. Unfortunately, even via Audio, I wasn't able to finish the book. Actually, I stopped by chapter 8.

The narrator cannot be completely to blame, however, how does one read such a terribly unedited book?! So, yeah, I pulled the book off Kindle Unlimited to verify. She used the word "something" 162 times in a book with 262 pages. That means 60+% of the pages are thrashed with a beating of the variations of the word "some".

I love to try out new/Indie authors! So, I tend to have a high tolerance/patience. I hate giving bad reviews so this truly breaks me heart. :-(

I'm giving 1* for an intriguing storyline. The character where unbearable, too. :-/ 1* by default for the ending as I wasn't able to complete the book.

My star ratings include these 5 elements:
1★ story line
0★ engaging characters
0★ use of world building/descriptive
0★ being well edited or narrated
1★ the ending

This was good story but it needs an editor. The narrator did a great job despite the editing issues, awkward language/clumsy phrasing and jarring word choices the author used. She made the completely unlikely hook up almost work. There were some fun elements, but apparently in the future, there's no csi teams, no one gathers evidence and cops just move bodies around so PIs can look at them. I guess the author had never read any crime fiction before writing one. Overall the story was good but it could have been really awesome.

Burks pens a powerful tale the changes tonally as the story progresses. This is not a humor type book in the oughtright, but it does has hints of Adams and Pratchett in its flavoring. It ALSO has some cyberpunk, mythology, and noirish chunks to it as well. As crazy a combo those things are they work, which means Burks has done a great job writing this.

Sheckells is worth every penny as the narrator, She really clothes herself in an Alex suit, and then takes off running and dares you to catch up to her. She is pitch perfect in her role as the guide into Burks' world.

If the first book is any indication, then Burks has a hit series on her hands. I did receive a promo code to review this book, but did not, in any way, affect my opinion of this book.

I loved this twist on the Gods. Good writing, detailed world. The ending just fell flat for me. I would look into the next book though and see how the story goes.

I love anything do to with Greek Gods. The author did a wonderful job of creating an interesting premise and story around them. I thoroughly enjoyed it and can't wait for the other books in the series to be available on Audible.

The narration was a little over the top for me. Very melodramatic ALL the time. I don't mind melodrama when the story calls for it, but when it is overdone, it starts to bother me. I realize this is a subjective thing, though, so I don't want to ding the rating too much for this. And it obviously is not something that should keep anyone from using a credit on this one. Still very enjoyable and worth a listen.

I received this title for free in exchange for an unbiased review.

The Greek God's are on the war path

Nice twist with the future where the power of Zeus is used to power the world after the oil is gone. I do feel the book is a little rushed though, moving at a fast pace to get to the finish line. Most of the gods are barely even touched on other than superficially before the big fight. That being said, it sets the base for a series with many possibilities.
I was given this free review copy audiobook at my request and have voluntarily left this review.