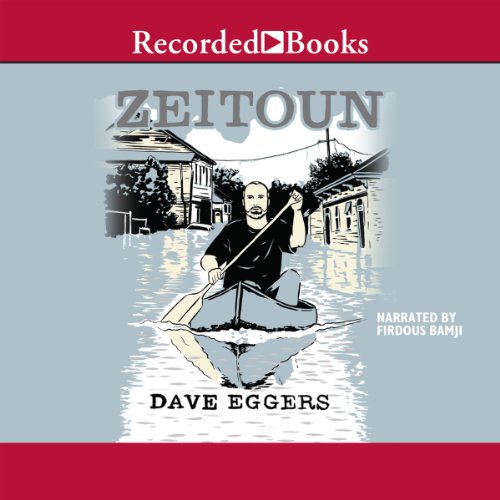 When HurricaneKatrina struck New Orleans, Abdulrahman Zeitoun - a prosperous Syrian-American and father of four - chose to stay through the storm to protect his house and contracting business. In the eerie days after the storm, he traveled the flooded streets in a secondhand canoe, passing on supplies and rescuing those he could. A week later, on September 6, 2005, Zeitoun abruptly disappeared.

Eggers's riveting work, three years in the making, follows Zeitoun back to his childhood in Syria and around the world during his years as a sailor. The book also traces the story of Zeitoun's wife Kathy - a boisterous Southerner who converted to Islam - and their wonderful, funny, devoted family. When Zeitoun vanishes, Kathy is left to make sense of the surreal atmosphere (in New Orleans and the United States generally) in which what happened to Abdulrahman Zeitoun was possible.

"Imagine Charles Dickens, his sentimentality in check but his journalistic eyes wide open, roaming New Orleans after it was buried by Hurricane Katrina ... Eggers's tone is pitch-perfect - suspense blended with just enough information to stoke reader outrage and what is likely to be a typical response: How could this happen in America?" (Timothy Egan, The New York Times)

Something bold, ebullient, yet quiet

There is something bold and yet quiet about 'Zeitoun' the book and Zeitoun the man. There is also something bold about Dave Eggers. I don't always like the flashier parts of Eggers. The sparkle and the shake of 'A Heartbreaking Work of Staggering Genius' or the fur-covered binding of 'The Wild Things' didn't really capture me like they did some. But after reading 'A Hologram for the King' I've started recognizing it for what it is -- David Eggers is simply enthusiastic, ebullient about ideas and people. He can't help himself. He has an idea and he wants it big or bigger. He wants Zeitoun's story written across the sky. For most of us the wish or desire is enough. It fills us up. We are done there and can go to bed and rest comfortably. The brilliance of the idea quickly gets burned out as the sun of the rest of our lives burns our dreams away. The brilliance (or genius) of David Eggers is his ability to follow up on these quirky little ideas. He has tremendous follow-through. He doesn't forget, he doesn't dispose, he uses and crafts and makes and publishes.

Not every book written by Eggers will be genius, but his ENERGY is always genius. His momentum is always brilliant. And, 'Zeitoun' the book was brilliant. It showed the beauty of people and the inhumanity of bureaucracies. It is the story of America. How America can contain both the best and the worst of humanity, often lit by the same light and drowned/baptized by the same waters.

Eggers is an excellent teller of other people's stories, as illustrated by his brilliant "What is the What," the story of Sudanese refugee Valentino Achak Deng. In Zeitoun, he tells the story of a Syrian-American, a successful New Orleans contracter for years, who is wrongfully imprisoned by FEMA in the wake of Katrina. The contrast between the warmth, vitality and manifest goodness of the Zeitoun family, and the impersonal brutality and incompetence of the "military occupation" authorities who took over New Orleans is striking and sobering. A "must listen," even if "What is the What" is a richer story and slightly better narrated.

This is two books in one. The first is a mildly interesting study of the life of Zeitoun, a Syrian/American who marries an American woman who has converted to Islam. They work hard, overcome a lot of common obstacles and make a good life for themselves and their children. They live in New Orleans and get blindsided by Katrina just like hundreds of thousands of others. This book includes enough engaging biographical material for a nice feature story in a magazine.

The second book is the compelling story of Zeitoun's harrowing experience when he stays in New Orleans to protect his property and lend a helping hand to others. The meat of this narrative begins about two thirds of the way through the book and progresses through a lot of day by day detail which is chilling and sometimes appalling. Finally there is a kind of prolonged post-mortem.

Unlike the other reviewers, I thought the material, which is very powerful, was poorly served by the story telling. I understand that it was important to introduce Zeitoun and his wife and establish them as people we cared about, but this was done with so many mundane details and somewhat jumbled flashbacks that I nearly gave up before I got to the point of the story. Clearly the other reviewers did not have the same problem, so it may just be that I don't enjoy discursive writing.

I also found the vocal narration plodding and uninspired.

Nonetheless, I am glad I stuck with the book until I got to the story at the heart of the piece. It is an authentic, "How could this happen in America," story.

Well, after I read it, I definitely would have. But I have since read that the main character was arrested for beating his wife, and I wonder if the whole story was a sham.

Regardless of whether the main character was accurately portrayed, the story made me realize how vital our legal intrastructure is, and how we have to have emergency preparedness to make sure people's rights are respected during disasters.

I don't know....I just found it lacked substance and the detailing was long winded.

Has Zeitoun turned you off from other books in this genre?

Yes the characters were delightful and inspiring.

when one asks what happened during katrina...

there are many stories that one could use and amplify to help tell the story of katrina, but the zeitoun family's story is one that will be shared for generations. eggers does a wonderful job weaving family history, a host of interviews and perspectives in this fantastic book. the narrator was good, and not distracting. i highly encourage you to spend your time with the zeitoun family.

I am 2/3 of the way through, and it so slow. So many of the details are unnecessary and repititious. If I read it, I would skim quickly past those parts, but you can't when you listen. Either listen to an abridged version or read this book. Warning: it will take forever if you listen! This is about the 80th book I have listened to and this is only the second time I wished it were abridged. The story is worthwhile, just not in this format.

One family's experiences during Katrina

I do not think I am the one to judge this book. I am not an American. I am not a Muslim. I am not religious and lack the faith spoken of in this book. Furthermore, I do not think this book adequately looks at what happened before, during and after Katrina. It studies one family’s experiences, only that. Zeitoun disobeyed the mandatory evacuation order.

Nothing wrong with the narration by Firdous Bamji.

I was hesitant to read this because I thought it might be another depressing story about Hurricane Katrina. While it has its depressing aspects, the characters are so well-developed, I felt as if I knew them. There are many more twists and turns that push Katrina into the background. Katrina was merely the catalyst for the calamities that resulted in the lives of Zeitoun and his family. I enjoyed this book very much and only reserve 5 stars for "Absolute Favorites" so 4 stars is a Winner.

terrific book about a stunning failure

Difficult to believe what happened here could actually happen in America. Nonetheless, Eggers tells a very descriptive story about how one man got caught in a vortex of bureaucratic incompetence in the weeks after Katrina.