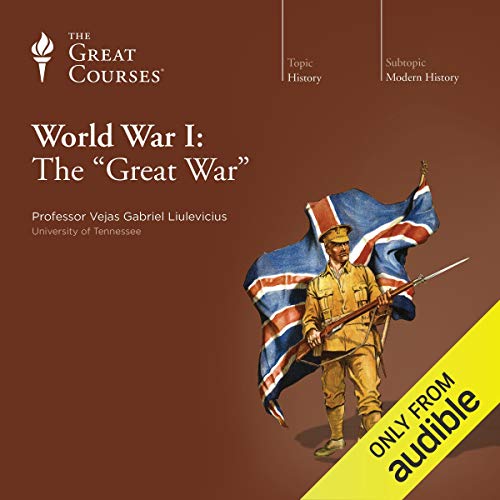 World War I: The Great War

World War I: The Great War

Touched off by a terrorist act in Bosnia and spreading all too quickly beyond the expectations of those who were involved, World War I was an unprecedented catastrophe with a ghastly cost. After this first "total war" - the first conflict involving entire societies mobilized to wage unrestrained war, devoting all their wealth, industries, institutions, and the lives of their citizens to win victory at any price - the world itself would never be the same.

These 36 riveting half-hour lectures cut through the tangle of historical data to uncover the patterns that make sense of complex events. Whereas most World War I narratives focus on the Western Front in France and Flanders, with its mazelike trenches, gas attacks, constant shelling, assaults "over the top" into withering machine gun fire, and duels of dog-fighting aviators in the sky, Professor Liulevicius also devotes great attention to other important arenas, including the Eastern Front, the Southern Fronts, the War at Sea, the Arab Revolt, the Communist Revolution, the Armenian Massacre, the Spanish Influenza, and more.

Professor Liulevicius combines chronological and thematic approaches for a sweeping survey of World War I's many dimensions. He explores themes such as the surprising eagerness of all parties to plunge into mutual slaughter, the unexpected endurance of societies undergoing total war, the radically different hopes and hatreds that the war evoked, with remarkable contrasts between western and eastern Europe, the meanings that the different sides ascribed to the war, and the role of various ideologies in the war's course and conduct.

I decided to listen to this course since this is the 100th Anniversary of WWI. I wanted to know more about this "Great War" that is so often overshadowed by WWII. The only two criticisms that I have is the lack of a chronology in the course and lack of an emphasis on the military history. The course is highly topical with lectures like: Air War, War at Sea, Propaganda War, Dissent and Its Limits, etc... All are well-researched and well-presented, but the lack of a clear chronology leaves some of these topics in a vacuum. I found myself on Wikipedia a few times being sure that I was not confusing some of the chronology. That being said, I understand why the professor decided to use a topical approach--it allowed him to tackle major issues in single comprehensive lectures rather than spreading those same issues throughout the course. The other thing missing from this course is a comprehensive discussion about the battles. The professor certainly mentions the major battles and provides some discussion, but this is far from a military history. The course is much more focused on the social and political issues than the military ones. If I was in charge of the Great Courses, I would expand this course by adding another six lectures--maybe two dedicated to a chronology and four emphasizing the military history.

While these are significant criticisms, I need to emphasize that I still consider this course excellent. While I believe the course would benefit from more chronology and more military history, these are mere omissions. The quality of the course content that is included is outstanding. The professor is clear and organized. The professor is interested in the topic and knowledgeable.

Since I was a history major in college and often read history books, I judge a history course by two factors: 1. Did I learn something? and 2. Do I understand the topic better? I can answer both of these in the affirmative after finishing this course. I learned much more than I previously did about the political fights throughout Europe that led up to the war and dominated military decisions. For instance, I found it fascinating that, at one point, German politicians were making strategic decisions about the conduct of the war with the next war clearly in mind--they wanted to be in a better position for the next time that Europe tore itself apart in bloody conflict. This certainly belays the myth that World War I was fought as the "War to End All Wars." The course did not make me an expert on the topic, but it gave me a better understanding and appreciation of the history of World War I.

a case for WWI as watershed

What made the experience of listening to World War I: The Great War the most enjoyable?

The exploration of sociopolitical ramifications was particularly rewarding, a theme I would not have appreciated in my youthful fascination with battle. Professor Liulevicius has a strong delivery, and the intensity of his interest in WWI's aftermath as well as its progression shows.

What other book might you compare World War I: The Great War to and why?

Listeners who liked this should definitely try Liulevicius's lectures on Terror and Utopia in the 20th century, also excellent. His lectures on European diplomacy 1500-present are decent but less engaging.

Among the generally excellent Great Lectures, I found this one outstanding. I respectfully disagree with Saud and Bobbie, feeling there was a strong arc, hammering hard on the theme of ever-greater desperation in a race against internal collapse as much as defeat by the enemy.

A mere chronology of interconnected battles would have been relatively unenlightening and uninteresting, especially in light of trench stalemate. The real significance of WWI lies in its mutual exhaustion, social reaction to that, and the surviving institutions originally designed to combat it. The "theater" approach here, explaining how each theater fed into total war, contributing to stalemate, exhaustion, and collapse, serves the subject well.

This is a fairly deep delve into the issues at play in WWI, but be aware that it also presents a remarkably shallow survey of the Military history. Instead, it focuses on the social forces and human experiences in and around the war.

Just as an example, many will raise eyebrows at the fact that despite an 18 hour run time, Belleau Wood barely gets a passing mention in a single sentence (the USMC is not mentioned at all). The lecturer is clearly more interested in the social aspects of the time period, so much so that at times it felt that he was writing off the actual war in question by asserting that yes, it was a tragedy, and then moving on to instead discuss political and social trends. Battles are generally only discussed when they serve to illustrate the human experience or represent major shifts in momentum.

I enjoyed the series and learned quite a bit, but found it bizarre that such a long series on the war discussed so little about the war itself. Military history does not seem to be the lecturer's forte and is certainly not his primary interest, but I would still recommend for those who are not strictly looking for a strategic/tactical analysis of the conflict and want to understand its effects on society and geopolitics. It is certainly a good look at the wider motivators and effects of conflict.

Simply put, this is a superb course and my favorite out of the 6 'Great Courses' I've done. It is packed with information and the lectures are thoughtfully laid out and presented in a way that makes the material easy to consume. Professor Liulevicius focuses on a set of key themes and weaves these seamlessly into the course as he traces through WWI history; note that the concentration is primarily on big picture items: the before/after geopolitical landscape, social impacts, technology, etc. -- while the major battles and the high level strategies are covered, if you are looking for an in depth breakdown of tactical skirmishes this course probably isn't for you. I'd highly recommend this course to anyone seeking a deeper understanding of WWI.

I've listened to a number of audio books by the Great Courses and found this one to be among the best. The lecturer is a master of the facts and his presentation style keeps you engaged. I highly recommend this book.

I agree that with the other criticism that it is superficial and has no chronology. I could live with that if the course had linkages between the individual lectures. I could not identify the organizing principal behind the course. It was a disappointment since the other course by this presenter was quite good.

This course seems to focus more on different topics (naval battles in one lecture, air combat in another lecture, the German economy in a third lecture...) than get into the chronological details of the war from beginning to end.

This was a fantastic listen and well for the time for anyone interested in the Great War, the end of the "old world" and the seeds of world war 2. Also check out Dan Carlin's hardcore history on WW 1. It will blow you away!!

This course is a good overview and introduction to the many facets of struggle during the Great War. It presents the bigger picture, to be combined with other sources such as the Great War YouTube series.

The strokes can be a bit too broad sometimes, and while the lecturer tries to present the issues as complex as they really were, it misses the mark a couple of times.

The lecturer generally abstained from an abundance of speculation, which was appreciated, but sometimes slip into unsubstantiated conclusions. Those are minor, and generally prefaced with qualifiers.

All in all I recommend it to anyone interested in the war and the ripples it caused through history.

A concise history of the Great War

If you want to revise your knowledge of the First World War in a pleasurable way, I can recommend this series of lectures. It concentrates on all the main topics and sums up the main facts without going into too much depth. It does not always seem unbiased or totally fair against all the waring parties, but it is written by an American for an American and British audience after all, and sometimes this shows. But all in all, a good series of lectures.