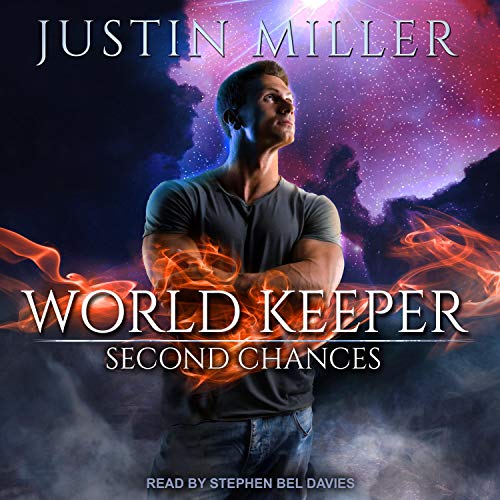 Everyone needs a second chance. But not everyone is able to get one. Some are wasted, some are lost, some are cherished. Join Dale as he lives out his Second Chance, and all of those around him who get their own.

A World Too Big To Care About

I just can't bring myself to read this book.

I really loved the first few books of this series, but I've noticed a trend with the story that has been getting worse as the series progresses. The story has never had any real "plot", and the character “Dale” is about as blank of a slate as you can get for someone who has to actually make decisions, but the story has always focused on the worlds and the characters within them, and the interesting mechanics of being a Keeper. This was really fun, because it's a brilliant multiverse concept that hasn't ever really been done before, and it was a wonderful experience to be able to follow an ENTIRE WORLD as the POV character.

But as wonderful as the idea is, Miller went too far with this quirk (in my opinion). Quantity isn't the same as Quality, and as the series progresses it becomes clear that he doesn't understand that. Miller has made so many worlds and characters and magic systems that in order to keep any sort of chronological consistency we can't seem to get more than ten minutes with any character or world at a time. And with so many characters to keep track of it's literally impossible to keep up any sort of investment through the story. The book is bloated with half-developed characters who don't do anything of consequence and plots that don’t go anywhere. Half the time I don't even know who this established character we're now following even is, or what is the unique quirk of whatever world we're on. Like, it took me almost 5 minutes to remember who the hell Dana was, and she's one of the more interesting ones.

There have never been any real stakes in this series, and after the colossally boring arc that was the VRMMORPG game (I can't even be bothered to remember it's name), nothing feels like it has any weight. (Please don't make me comment on the idiocy that was putting a LitRPG world where death DOESN'T mean inside another LitRPG world where death DOES have meaning and expecting people to care). The arc with James was a wonderful way to fix that, and for a moment I actually cared again, but it progressed so slowly after the reveal that I just couldn't get invested.

Also, [Minor Spoilers for this paragraph], the reveal that the Keeper System isn't omniscient really drained a lot of the wonder from the universe from me. It's not some super-universal fundamental law of reality, capable of literally building a universe from the ground up, universally laws and all. Not even the product of a true and omnipotent god. Instead, the System is nothing more than an (incredibly) complex simulator, something we can make here on Earth given time and money. (I drew this conclusion from the truth of souls being a multi-universally immutable fact instead of a personal in-universe Keeper design choice).

[Rant warning]
And don't get me started on the Gods. Half of them we've seen maybe once or twice (Who remembers Udona? I don't!), and all of the female ones have trope-laden, cardboard cutout personalities that get absolutely no development. At least Tryval had an arc with his daughter and his empathy for his people. Terra and Ryone are just glorified sex dolls, for all the personality and consent they have. Dale clearly feels NOTHING for them, which makes their constant attempts at having skinship with him feel pathetic and honesty kinda creepy after a while (as in Dale is being creepy by having them simper and pander for his favor). Harems devolve into exploitation VERY quickly when you can't convince the reader that the owner/center cares about the members, especially when the owner has absolute power over their minds and bodies, like Dale does. Think about it, they have personalities and free will because he ALLOWS them too, and he can change any part of them at any time. Talk about an incentive to get on his good side. It's peak "quid pro quo", and just...creepy.

On another note, it's constantly frustrating for me that Miller REFUSES to explore many of the cultural, societal, and psychological impacts of his wondrous and strange universe. Like, how does it change a society when certain individuals are so powerful in relation to others that they might as well as be demigods? Is there rampant oppression and injustice, as seen in cultivation stories? How big really is the difference between high levels and low levels? What about how study and research are affected when there is an objective measure of when you learn or discover something new? Do people refuse to acknowledge anything as actual skill or information if it isn't also recognized by the System as well? Are there certain aspects of a society that are completely abandoned, such as personal spirituality or basic empathy? Or maybe, what changes does it make to a society when their deities don't change over time to reflect the cultural and personal needs of the society they inhabit, but instead are static fundamentals of the universe? Does worship change to something closer to nationalism? Does the society bend to fit that God, instead of the God bending to fit that society (as happens in our world)? Is this why the humans are so warlike, the elves so magical, etc.? Does this mean that a human studding magic counts as heresy? Answer my god damn questions, Miller!

While this book is technically a continuation of the wonderful world building from the previous books, there is just so goddamn much of the “world” that nothing ever gets done. And the "Space" age is just going to make things worse. Why the hell are you adding more worlds and species when you haven't even explored the ones you have?? Remember the Mer-kin things?? Remember what you did with them??? Because I remember, and you didn't do anything with them!

[Rant escalation warning]
Also, just because I can, what Miller did with Tsubaki by turning her stoic, devoted, honorable "knight-that-will-follow-you-into-hell-itself" character and twisting it into a sad, lonely "girl-needs-the-protagonist-to-show-her-how-to-be-happy" archetype totally ruined all of the flare and impact she had for me. Especially when there was no foreshadowing or even any indication that she was unhappy with her duty until Dale "I-am-so-kind-and-empathetic-despite-not-giving-a-shit-that-I-xenocided-my-entire-homeworld" decided he needed to again show how much of a good person he is. Actually, wasn't it heavily implied that she was most the satisfied and content when she was serving him "honor-my-undying-oath" style?? Also, her ascension to godhood?? What was that dumb-ass reasoning that she didn't want to be on the same power level as the person she's supposed to protect?? How does that make any sense?? Wouldn't you want to be more powerful than your charge, not less powerful? Does she not trust herself to be loyal if he's less powerful that her???? It's so dumb I want to cry and makes her look like an idiot. ALSO??? HER DOMAIN?? LIGHT??? The woman who spent centuries dedicating herself to a single task, serving a single lord with her entire being, she who would sacrifice anything to accomplish his will or protect him, and she who ascended by choosing to not only serve him on a mortal level but also on a divine level. got the domain........of LIGHT?? Not honor??? Not duty??? Not loyalty?????? LIGHT????????? F*** off, Miller.

Okay, so, maybe I went off on a few tangents. It may have gotten a bit heated. That said, all due respect to Justin Miller, he's a better writer than most of them out there and made a truly wonderful book series. I'm only this passionate because he has the skill to make me care (at least in the first books). Anyway, here is the TL;DR:

Too much world, too many characters, not enough character in our characters, book five was dumb, the blank-slate harem-protagonist nonsense with the gods is creepy, lots of wasted potential with the deeper implications of magic on the societies, the bloat of stories is just going to get worse, Dale doesn't deserve Tsubaki, her domain is bull, and I'm salty.

the only thing I have a problem with it is there too many females characters that does everything there's so many female characters in this in his like low-key annoying I just want more men representation in the books that's all.

Expansive and lots of fun

This series has been wonderful to read/listen to. I like that the MC is very realistically flawed without falling hard into any specific trope. I can easily see an average person getting "squirreled" at every turn due to the amount of information and events you would need to keep track of. The fact that the author can keep a decent story going while so much is happening is impressive. Both the gamer and dreamer in me are at a buffet.

i loce this series. the narrator is great and the story keeps growing in interesting ways. the worst part of this book is audible hopes you enjoyed this presentation lol

Another solid book in the series

Favorite part is when Stephen Del Davies swallow hard in chapter 68 at 1:11

this book was absoulwtely amazing i don't understand why this series isn't more popular than it is but it is definitely a hidden gem. give this series a try trust me.