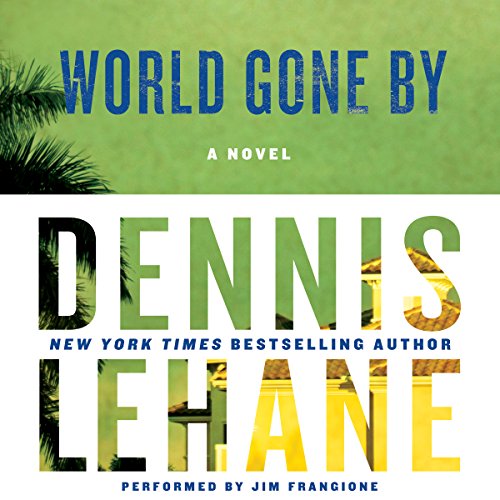 Dennis Lehane, the New York Times best-selling author of The Given Day and Live by Night, returns with a psychologically and morally complex novel of blood, crime, passion, and vengeance, set in Cuba and Ybor City, Florida, during World War II, in which Joe Coughlin must confront the cost of his criminal past and present.

Ten years have passed since Joe Coughlin's enemies killed his wife and destroyed his empire, and much has changed. Prohibition is dead, the world is at war again, and Joe's son, Tomas, is growing up. Now the former crime kingpin works as a consigliore to the Bartolo crime family, traveling between Tampa and Cuba, his wife's homeland.

A master who moves in and out of the black, white, and Cuban underworlds, Joe effortlessly mixes with Tampa's social elite, US naval intelligence, the Lansky-Luciano mob, and the mob-financed government of Fulgencio Batista. He has everything - money, power, a beautiful mistress, and anonymity.

But success cannot protect him from the dark truth of his past - and ultimately the wages of a lifetime of sin will finally be paid in full.

Dennis Lehane vividly recreates the rise of the mob during a world at war, from a masterfully choreographed Ash Wednesday gun battle in the streets of Ybor City to a chilling, heartbreaking climax in a Cuban sugarcane field. Told with verve and skill, World Gone By is a superb work of historical fiction from one of "the most interesting and accomplished American novelists" (Washington Post) writing today.

In the beginning, I thought the narrator was too bland. However as the story picked up he became better and better and was incredible by the end. I haven't enjoyed a book this much in so long it was wonderful. I would listen to all nine hours in one sitting. Fabulous.

There's just no one else who writes like Dennis Lehane. Gritty and real to the bone, yet poetic. Scorching. He's the type of author you wished churned out a pair of books annually, yet wait patiently for because he's that freaking good.

And Jim Frangione was an excellent choice as narrator. Spare and to the point, he still conveys every nuance & tone., whether he's narrating a hard-boiled mob story like The World Gone By, or a Chet & Bernie mystery......"Oh, Bernie..."..... Six stars, for both author and narrator.

AN EXPLOSIVE END TO THE TRILOGY

Would you consider the audio edition of World Gone By to be better than the print version?

I think they are equal.

Showing the cracks in the foundation of the corrupt empire and the explosive violence which seemed to be the answer to all the questions from begining to end.

What does Jim Frangione bring to the story that you wouldn’t experience if you just read the book?

There was a sense of foreboding with the book. We all knew what was coming but were sad to see it happen.

Great work - by the writer and narrator.

Mr. Lehane can still write up a storm

If you could sum up World Gone By in three words, what would they be?

What was one of the most memorable moments of World Gone By?

I have a hard tome choosing one scene from ten or eleven hours of listening. There are many compelling scenes. Joe Coughlin has moved from Boston to Tampa, has a son named Tomas and a deceased wife. He still runs with the mob and generates excellent income. He is partners with Meter Lansky, Moe Green and other notable gangsters. The book ends in Cuba, where Joe has just about run his string out. Charm and smarts can only get you so far, but if you live your live with scumballs, you pretty much know how that's gonna end.

Which character – as performed by Jim Frangione – was your favorite?

I liked all of them. I think Tomas, Joe's son, is very well voiced. It's not that easy to do kids. The black kingpin in Tampa is also very well done. Parallels to The Godfather are all over the place, but they don't get bothersome, because Mr. Lehane creates these worlds so well that it never seems like copying. I do kinda miss the banter of the Patrick Kenzie and Angie Gennaro series, but there are a number of those to read. The stand-alone book that I really love is The Drop. Maybe because it was James Gandolfini's last work, or because Tom Hardy was so spellbinding in the movie, or because it was just such a well done gloomy, noir, crazy ambience, but, whatever, I hope Mr. Lehane has a few more of those in him.

No. It was a good read, and although it pulled for tears a few times, it didn't make me sad. These guys chose their lives, and the price they pay seems reasonable. They can even see it coming, sometimes, which the rest of us non-fictional mortals cannot do.

Nope. A good read, and it is good to read one of these that is not stretched into 12-14 hours. These stories can be told in shorter forms, no matter what the novel convention is.

Dennis Lehane is one of my favorite writers. I've faithfully read his books for years. That's why it bothers me to have to admit that I really couldn't like this book. I wanted to, and I tried to like it, but I was glad when it ended.
There were far too many characters to keep track of. A good book should take the reader away. It shouldn't be hard work to remember multiple characters, especially when the plot is so implausible flimsy, unconvincing, and far-fetched.

I like my gangster stories well written without much slang, with diverse characters, and kind of historically accurate. Lehane provides all that. I could use this story in my lit class it is so well crafted. On a cultural note, Lehane reveals the multicultural reality of how the southeast is part of the Caribbean region: geographically, economically, and genetically. The underworld pioneers Lehane summons in this world gone by strutted upon a Florida stage whose bounds went far beyond the mere national, moral, and racial because that was (and is ) what's required to exist and even prosper--for a time.

Lehane evolves, getting better all the time

What made the experience of listening to World Gone By the most enjoyable?

the quick immersion by an experienced writer into the lives and surroundings of mobs in wartime Tampa.

Have you listened to any of Jim Frangione’s other performances before? How does this one compare?

This is my first experience listening to Frangione, a steady, diverse and mellow voice that's a pleasure to listen to.

I have read most of Lehane's Boston novels and loved them. In this one, he goes up and beyond, knitting together a rich description of a time gone by and the complex plot of gang activity and revenge.

It’s hard talking about what makes this novel stand out without giving things away, so I guess I won’t go much into anything. I suspect a lot of people are going to have a problem with this novel just on the basis of how things go for some of the characters. For me, this novel is kind of like Godfather 3. Not just for being a third in a series, but also other things. Again, it’s hard to get specific without being a spoiler or making hints that essentially become spoilers if you have any intelligence. One thing I can say is Lehane plays with a bit of, I guess, magical realism in this novel, which I think is new for him. Maybe magical realism isn’t the right term, but close enough. It helps bring this installment to its logical end. I HOPE this series goes on and keeps following the Coughlin’s down the bloodline. I’d love a paranoid, post Kennedy era chapter not even necessarily about gangsters.

Awesome read, I liked Live By Night so I figured this one would be good as well but it exceeded all my expectations. The last two chapters really brought it home. Hands down the best ending of a book I've ever read.

If you liked the 1st book then you will enjoy this one. Only complaint is it ended to quickly! End