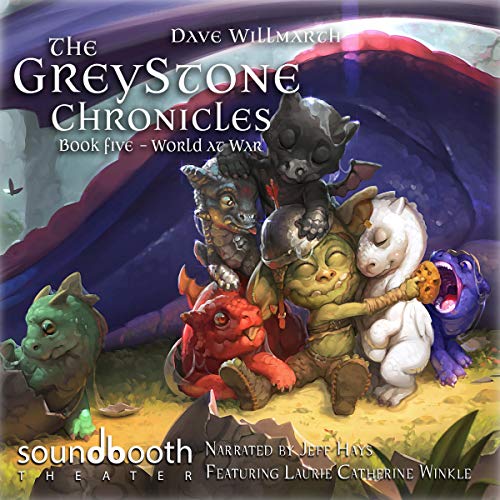 King Alexander and his guildmates have expanded Elysia into a formidable kingdom. Their ongoing battle against the Dark One and the drow wizards is escalating. Alexander works to bring together the Elves, Dwarves, and Human Kingdoms to establish the alliance proposed by the Dragon King. But the dark magic of the drow has infiltrated even the highest offices, blocking his efforts.

War comes once again to the gates of the keep, and Alexander must find a way to defend his citizens before he can go on the offensive and take the fight to the stronghold of his enemies. All of Io, citizens and players alike, are pulled into war as the forces of darkness strive to destroy or enslave every surface city.

Olympus is still under siege, and the threat intensifies as doctors determine it's necessary to wake Jules from her months-long slumber. Jules and Alexander prepare to meet face to face for the first time, with a little help from their friends.

Join the Greystone Guild for this epic conclusion of a LitRPG tale of magic, monsters, wizards, and dragons.

Felt a bit rushed at the end, but this one was the best one in my opinion.

This entire series has really been excellent, both with the writing and the Sound Booth actors!

I won't spoil anything and will just say that I enjoyed this book more than the last. While there are still dark moments, there is healing as well and even though there will still be challenges for the characters, it seems they will be better able to face them going forward.

The series wrapped up well, though I would be interested in a follow up book. :-D It could even be a new story arc about helping people with the immersion pods and the challenges that might entail.

Also, Go Rufus! He could have his own story. I mean, he's Fitz's familiar and has probably seen a lot of crazy things.

when it ended I was kinda feeling there should have been just a minute or two more to wrap up some player relationships. otherwise awesome

The epic conclusion has arrived! So, one of my favorite litRPGs comes to a close. I love this story, it brings a smile to my face so many times while listening. The characters, the world-building, everything was excellent. The performance by Soundbooth Theatre was extraordinary. I must agree with others that the ending was rushed and quite anticlimactic. There are also many loose ends and questions left unanswered. All this time I never knew Fitz’s true background. I wondered if I had missed something all along or if this was a big reveal? What of the Dragon Empire, did they not have a battle as well? Ky and Lea, the baby dragons, Fibble and his bonded dragon, the Mithril worms, and the Guardian. There certainly seems to be enough material for another volume or the beginning of a new series. I look forward to seeing more from Dave Willmarth.

always one of my favorite series and the way they performed this was fantastic, I love how immersed I get

Definitely the best so far!!

And hopefully there will be many more..Long live IO Online!! Fibble and the crew left a lot of unanswered questions yet this was another satisfying bite!

This needs to be a movie Series. This shows the future of VR and is a great story.

Super Disappointed with the end

Great series, and great narration. However I was very disappointed by the ending. Its short, and he left several other plotlines, even if they were minor. If he were to write another book for this covering those, id happily change my rating.

I have been following this series since it first came out and I could not be happier with it's ending. Yeah, I'm sad it's done, but man what an ending. Plus the author tied up a great deal of the loose ends.

As for the narrators they did such an amazing job throughout the whole series the voices were consistent and the emotions were solid and easy to understand.

The music is great, the pieces were well-chosen and suited the scenes perfectly. Overall I can't recommend this series enough.