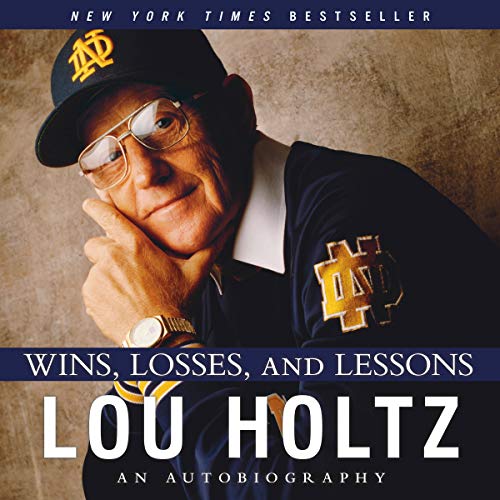 Few people in the history of college sports have been more influential or had a bigger impact than Lou Holtz. Winner of the three national Coach of the Year honors, the only coach ever to lead six different schools to season-ending bowl games, and the ninth-winningest coach in college football history, Holtz is still teaching and coaching, although he is no longer on the gridiron.

In his most telling work to date, the man still known as "Coach" by all who cross his path reveals what motivated a rail-thin 135-pound kid with marginal academic credentials and a pronounced speech impediment to play and coach college football, and to become one of the most sought-after motivational speakers in history. With unflinching honesty and his trademark dry wit, Holtz goes deep, giving us the intimate details of the people who shaped his life and the decisions he would make that shaped the lives of so many others.

His is a storied career, and Holtz provides a frank and inside look at the challenges he overcame to turn around the programs at William and Mary, North Carolina State, Arkansas, and Minnesota. From growing up in East Liverpool, Ohio, to his early days as a graduate assistant at the University of Iowa, to his national championship runs at Notre Dame and his final seasons on the sidelines in South Carolina, Lou Holtz gives his best, a poignant, funny, and instructive look into a life well lived.

Would you listen to Wins, Losses, and Lessons again? Why?

Did Lou Holtz do a good job differentiating all the characters? How?

Not sure that Lou was the best candidate to read the book.

Great story for all to hear

What made the experience of listening to Wins, Losses, and Lessons the most enjoyable?

Hearing the story in his own voice with the passion and recollection made this worth while. I am not a huge football fan and was not familiar with a lot of Lou's career details but found the matter-of-fact approach he took to each new team fascinating

What was one of the most memorable moments of Wins, Losses, and Lessons?

The story of how he was fired abruptly from Arkansas and never knew why. He still managed to quickly turn this around into a positive experience

What does Lou Holtz bring to the story that you wouldn’t experience if you just read the book?

Hearing his voice lets you better understand his speech difficulties

The story of his retirement, Beth's health scare, and his subsequent return to coaching

Would you consider the audio edition of Wins, Losses, and Lessons to be better than the print version?

I enjoyed this audio book very much. Lou did a great job narrating his work. As a coach, I also found it very inspirational. Great Job!

not just for football fans

great life lessons from one of americas most beloved football coaches and personalities. He has made a mark in lives of players, fans and the business world. probably most appreciated by people who recognize his name.

must have (hear) audible book for all genders

Not only is the book enriched with history and name dropping of many famous people, not only is it about football, the game and the players, but this book is about life and the changes life throws at us and perspectives on how to live and handle those changes. yes, it's a biography of Lou Holtz, and you will learn things about him that you wouldn't otherwise have a chance to know, but you get an inside on how he coached his team, not the plays, but how he brought the team together emotionally and as a family with integrity and honor and each time he put those things in place, the team was great and each time those things were missing, troubles fell upon them. this is not just a book for the male gender. it might help if you have some knowledge of football and some knowledge of who Lou Holtz is, but overall, this book will move you, even if you know nothing about football.

An inspiring book - not a football book

I am so glad that Lou Holtz reads this himself. It added so much charm to the story. It is not about football. It is about meeting tough challenges and winning. And when you don't win, you get tougher and then win next time. It is deeply moving, funny and uplifting. I recommend it for anyone.

I’ve heard some of the best motivational speakers in the world, from astronauts to Ann landers etc. When I heard Lou Holtz live, he was the best speaker I ever heard . Sadly this was just a returned.

a great listen! I've been a fan of Mr . holtz for a long time and his book made me appreciate the man even more.

The lessons of his life well lived through discipline and giving to others while being humble.