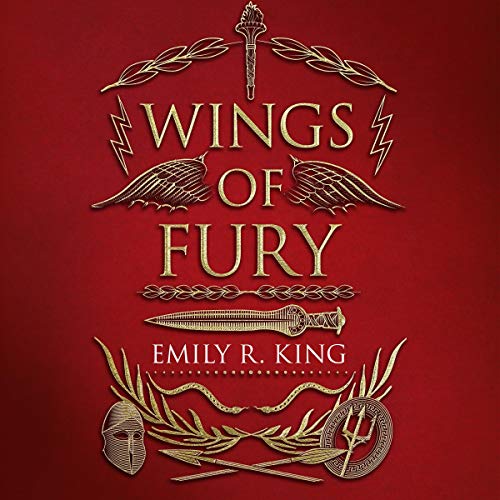 From Emily R. King, author of the Hundredth Queen series, comes an epic novel of ancient Greece, Titans and treachery, and the women who dare to rise up against the tyranny of the Golden Age.

My mother told me that men would speak about the Golden Age as a time of peace and happiness for all... However, the women of our age would tell a very different story...

Cronus, God of Gods, whose inheritance is the world. Among his possessions: women, imprisoned and fated to serve. The strong-minded Althea Lambros controls her own fate and lives to honor her dying mother’s plea to protect her two sisters at all costs. Althea’s journey toward crushing the tyranny has begun. It is a destiny foretold by the Fates. And she is following their visions.

On the southern isle of Crete, hidden among mortal women who have fled the Titans, is the Boy God, son of Cronus and believed dead. He shares Althea’s destiny to vanquish the Almighty - fate willing. Because Cronus has caught wind of the plot. He’s amassing his own forces against Althea’s righteous rebellion and all those who will no longer surrender or run. There will be war. If she’s to survive to write their history, the indomitable Althea must soar higher than any god.

“Narrator Lauren Ezzo has a lot of empathy for Althea, the storyteller.… Ezzo presents Althea as a complex character—fearless in the face of a hard world and determined to fulfill her mission. Ezzo shows the relationship between Althea and her older sisters as tender and protective. —AudioFile Magazine

“Sumptuous…King ably weaves Greek mythology into a cat-and-mouse spectacle. Readers will cheer for Althea as she upholds her family’s honor and fights belligerent gods with determination and confidence. This is a winner.” —Publishers Weekly (starred review)

“Sharp prose and smart characters…King (Hundredth Queen series) takes a fresh look at the Greek pantheon to create a clamor for the next book of this new series.” —Library Journal

Emily has done it again! The only problem is the wait time on the next book. I am so excited to share this awesome read at book club. Thank you for keeping my attention from page one!

Great start to a new series! Fast pace, twists and turns and great characters. I’m looking forward to the next book in this series.

LOVE both this author and the narrator

I seriously think this combination is a winning pair! I love Emily R Kings quartet The Hundredth Queen and after Wings of Fury she will be a lifetime favorite author. It feel like a fast story, it grips you in and doesn't let go until it drops you at the final page. Plus the story itself! I personally love Greek mythology but I've never heard a story set BEFORE Zeus rules. 5 starts highly recommend

Loves the story. Would love a different narrator.

The story was a great take in the female perspective of the times. I felt it was creative. The narration was so boring. I liked the tone of her voice but she rarely used inflections and all the male characters sound the same with way too deep voices. It was hard to track who was whom. Just weird.

A book about a fictional past that has a lot of meaning in the present.

liked the narrator. a little too much mysticism for my tastes. I really dig reality.

Thank you Emily! You're a vivid storyteller! DOBM can't wait for the sequel! Loved Althea and her sisters!

I enjoyed this story overall, the Greek mythology &
It’s characters, including their self serving actions for power. I wasn’t that fond of the narrator thought, she kept the same tone without much variation depending on the situation. It wasn’t until the ending chapters did that change. It is still well done, Emily R. King does not disappoint!

Hard to listen too

The narrator had to gasp for breathe before reading the next lines, for at least 80 % of the book. I became aware of it starting in chapter 6. Don't know if she strained her voice before doing the narration of not. It was painful to listen too with all the gasping

Took a while to get going

I'm not sure how I feel about this story. It was wonderful to experience women becoming empowered. However, I had a hard time with all of the mind wiping. It seemed like an overused gimmick to give the story twists and turns.