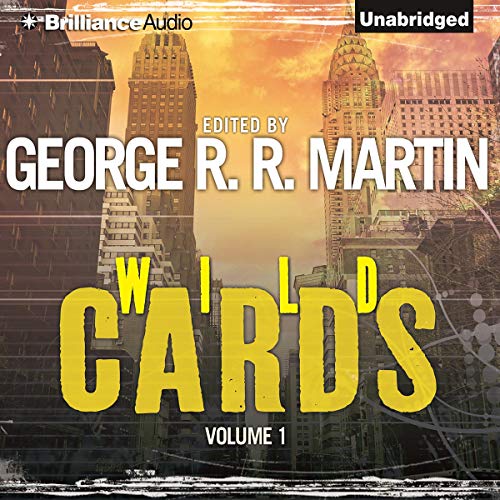 In the aftermath of WWII, an alien virus struck the Earth, endowing a handful of survivors with extraordinary powers. Originally published in 1987, the newly expanded saga contains additional original stories by eminent writers.

I was excited about this book, George R.R. Martin is a great author. The premise for the book is excellent. A virus from outer space attacks Earth, resulting in lots of freaks and some super heroes. For every ten freaks, there is one Ace.

The prologue sets it up well. The first story by Howard Waldrop starts the book out with an exciting story about Jet Boy, the main hero. The next story by Roger Zelazny is really good. Then Walter Jon Williams gets extremely political and the list of nobody authors that follow continue the politics. There are several hours of McCarthyism and black lists. Like the holocaust we need to be reminded of these black parts of our history, so we don't repeat them, but this pretty much killed the series and droned on for hours. Martin comes in with his story and with his brand of sex and realistic horrors tries to bring the series back to interesting. Victor Milan's and Stephen Leigh's stories help, but my mind had already gone numb from the 19 hours of disappointment.

The narrator does nothing to help. I ended up toward the end putting him on fast play and that helped a little. If you have to be put on fast play to be interesting, that is saying something.

I have a soft cover of this book and there are three stories in this expanded version that are not in the soft cover. I also have volumes 2,3 and 5. I will try reading them the old fashioned way instead of listening. Do not be fooled by the amount of books in this series. There are plenty of series out there that are not worth reading.

Remembering back to the 80s and what a splash this series made, I had to give the audio treatment a try. Very well done presentation with a large variety of unique character voices.
The story itself is a classic, treating the impact of superhuman (and non-human) characters on the 'real' world. If you aren't familiar with this series, but enjoyed the TV series Heroes, give this a try!

I decided to give this book a try after reading the reviews and am very pleased I did. It shows a world where an alien virus has infected the population post WWII. I greatly enjoyed the format of jumping POV's and showing how our timeline might have been effected by such an event - something I think was handled quite artfully by the writers.

The "Wildcard Virus" has effected people in several ways ranging from the Aces (superheroes) to the Jokers (those deformed or negatively effected) - and that isn't counting the overwhelming majority of those that get it that simply die horribly. With this in play it effects more than just everyday social interaction, it effects government, entertainment, crime, and quite a few other things in between.

There were characters and storylines I enjoyed more than others (the Sleeper, the Turtle, and the government anylist who can stop time being among my favorites) but all in all it was thoroughly enthralling with a wonderfully narrator to guide the whole thing.

Loved these books when they came out and was overjoyed they had finally been released as audiobooks. And as a bonus there are some stories in the collection that didn't make it into the book... at least into the UK edition. Definitely worth a listen by anyone who enjoyed the books or later shows like Heroes and Alphas

WHO KNEW "SUPER HEROISM," IS A DISEASE

What did you love best about Wild Cards I?

I've read some of the books. It was an experience to hear it brought to life by a voice. Dr Tachyon's voice was not what I imagined but then I never fully read or digested his description in the book. All the characters came to life for me in this work.

His voices weren't as distinctive as some readers I've listened too in past. However his voice had a feel, sound and quality that lent itself to the era where the story began and progressed through.

Super heroism is a disease. Look out "Body Snatchers," we've got one up on you this time.

Some of the segments of this book are not for young listeners. Personaly those stories too heavily focused on sex did not appeal to me as much now as when I read the books. For that reason the Fortunata chapters got skipped. Not that his story wasn't interesting and poiniant I just didn't like them as much as I did in my younger years.

What did you love best about Wild Cards I?

I'm an old Wild Cards fan. I own all of the books to the series and have loved reading them for years. When I found out that there was an audiobook of book 1 I had to have it and I was not disappointed. Luke Daniels is a great reader of the stories and his voice acting was great. I really enjoyed the new story of Ghost's origin with the Sleeper (Roger Zelazny's immortal character).

What was one of the most memorable moments of Wild Cards I?

My favorite part was Luke's reading of

My favorite scene is where the Radical (Mark Meadows) and the Lizard King (Thomas Marion Douglas / this world version of Jim Morrison of the Doors) team up to fight Hardhat during the 60 counterculture movement.

No. Not because it wasn't good but because it's one of my favorite books and I like to savor it like a fine wine.

If you know of or have been introduced to the Wild Cards shared universe this is a great production of book 1. If you know nothing about it I highly recommend it. It is kind of a Super Hero / Villain in an alternate reality of our world which diverged shortly after WWII into a realistic vision of our world with super powers.

Wrong execution of a good idea

I understand why people give this top ratings, but for me, there was such a lack of cohesion that I was too often left wonder what the heck did one chapter have to do with another.. or anything at all.
I liked the different writing styles as the differences became part of the characters, but again, some skills were distractingly lacking. Made it to chapter 19 when I realized I wasnt interested in hearing more.

An alien supervirus mutates a percentage of the population, creating great powers in people (Aces), or grotesque deformities (Jokers), both with no warning, reason or rhyme. Take this concept, and let loose some of science fiction's more imaginative writers to take this framework, and write stories in their own style and direction, and you have a must hear audiobook. Outside of the slow beginning, which sets up this universe, each story is different, yet still manages to tie in common events just enough to provide continuity and flow.

A few specific characters show up in most of the stories, but overall, the stories can stand alone, and actually weave together just enough to move an overall storyline along. My favorite Ace was one that hibernates, and when he awakens, has a different set of powers, good or bad, as well as a different body. There are definitely many others and you'll find your favorite, too. What I found most interesting, was that some characters I first thought were Aces actually were Jokers, and vice versa - Be ready for a few surprises.

If you want elegant prose that trips softly off the tongue, stop here. This is written in the language of the people reflected in each story, so you'll feel that this is almost a recording of the events, allbeit in a very positive way. Some of the writers provide a deep backstory, others build an action-heavy drama. All-in-all, this is a nice mix of writing that you'll enjoy. Do keep in mind that this series is so popular, that a good number of followup books were written in similar fashion. No surprise there.

In a few words, this audiobook is a delight, and if, after you're finished hearing it, quickly buy the second in the series, I wouldn't be surprised in the least. You'll like this one. I know I do.

good story until it gets raunchh

This is a collection of short stories set in the same world. Some of these stories are really really good like the story about croyd AKA the sleeper and the turtle. That being said some of the stories in this book are absolutely boring like the story of fortunato.

this story could use a shortcut

I listend to only 4 hours of the audio book and then just couldn't take any more. I think it is really boring. unfortunately, because I am actually a true SciFi/Fantasy Fan.

I personally don't like his voice. It is nice who he gives different voices and accents to different characters, though.