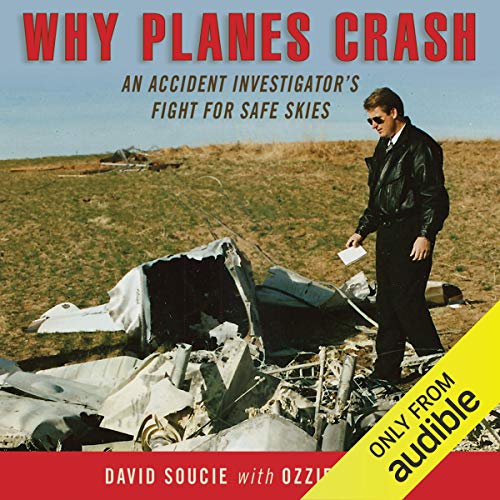 David Soucie, an aviation safety inspector and advisor on safety management to many groups, including the federal government, brings extensive experience to the writing of his impassioned memoir of his fight to make the skies safer. Elegantly performed in a normal-guy tone by Mike Chamberlain, Soucie’s audiobook is filled with up close and personal stories of harrowing tragedies and near misses. While everyone shudders at the thought of an airplane crash, preventing such crashes is Soucie’s career and purpose. Listeners will hear not only the heartrending losses but will also learn some of the physics of flight and will become inspired by the prospects for future flight safety.

Boarding an airplane strikes at least a small sense of fear into most people. Even though we all have heard that the odds of being struck by lightning are greater than the odds of perishing in a plane crash, it still doesn't feel that way. Airplane crashes might be rare, but they do happen, and they’re usually fatal. David Soucie insists that most of these deaths could be prevented. He’s worked as a pilot, a mechanic, an FAA inspector, and an aviation executive. He’s seen death up close and personal - deaths of colleagues and friends that might have been prevented if he had approved certain safety measures in the aircrafts they were handling. His years of experience have led Dave to become an impassioned consultant on the topic of airline safety. This includes not only advising the Obama administration, but also taking a leading role in the congressionally funded NextGen interdepartmental initiative in regards to both the department of transportation and the departments of defense, homeland security, FBI, CIA, and others. Find out the truth about airplane safety and discover what the future holds for air travel.

I've been an Airworthiness ASI since 2009 working for the FAA, and I can't tell you in words how much this book has inspired me. I like you Mr. Soucie, aspire to make aviation safer. Even though I may not have your broad experiences and forward vision, I do everything within my ability to uphold our mutual core safety responsibilities and safety first mentality with management levels of the FAA and with the Part 121 Operator. It was a pleasure to read from the man whose hard work and participation creating the use of automated tools (ATOS, PTRS, SAS, and others), has given me the ability to do my job better. I myself have thought outside the box, by creating some of my own data sheets to glean more target specific information from databases, Airline reports, and other sources of information. I recommend this book to be read by every ASI in the FAA, or any other person, or entity that plays a role in aviation safety.

Passing through chapter twelve and have yet to hear anything noteworthy about an accident. I think the author spent far too much time discussing his career (e.g.: time spent preparing med kits) and creating speculative narratives, or hypothetical scenes, and too little on actual investigations. I'm sure the author could share a great deal of insight into accidents, but this effort fell far short, unfortunately.

Interesting but not what I expected. More of a bio on the authors work than a look at learning cause/ effect

Fascinatin evolution of a conscientious investigator

If you could sum up Why Planes Crash in three words, what would they be?

This book is NOT really about plane crashes, per se, it is a story about one mans journey to make air travel safer. David Soucie is a flawed individual and does not tried to come off as anything else. Soucie is driven because of mistakes he personally have made and although he is the hero of the book (and does act heroically sometimes) he retains his humility throughout the book.

His investigation of the Hawaiian plane crash.

Not exactly what I expected.

Interesting story overall, but would have preferred more about actual aircraft accidents, and the ensuing investigations and findings.

The safety concepts are good and a lesson for all of us. However, the stories throughout the book seem far fetched and in some cases simply not true. The more I listened the more I couldn’t shake the feeling that none of it was true. I eventually had to stop listening, which is a shame because there is importance in the book...but it’s masked by fables.

Memoir of a crash investigator, not a scientific survey of crashes

Those looking for a scientific investigation into why planes crash will be disappointed in this book. It’s more of the story of a particular crash investigator and how he found a career in crash investigations. There are details about family, office politics, and bureaucracy but not an abundance of detailed commercial aviation crash investigation details. It’s not awful, but certainly different than what I expected so please be aware that the title is a bit misleading.

it was hard to get through this one. not what i expected. it was mostly a boo hoo story of an egotistical man who couldn't get his 15 minutes of fame. he came off as someone who has a superhero complex.

I enjoyed this book.

It's a good look into the issues in aviation at the time. Definitely makes me rethink flying.

Must Read for anyone who Travels by Air

Easy to listen to, not a dry technical approach to the subject. Its more of a autobiography about a man who has greatly impacted aviation safety, while taking some hard blows by people more interested in money then safety.
The narration is superb, the story is compelling, the only negative I can think of is the title of the book, which I fear will cause readers to think its a dry technical book.