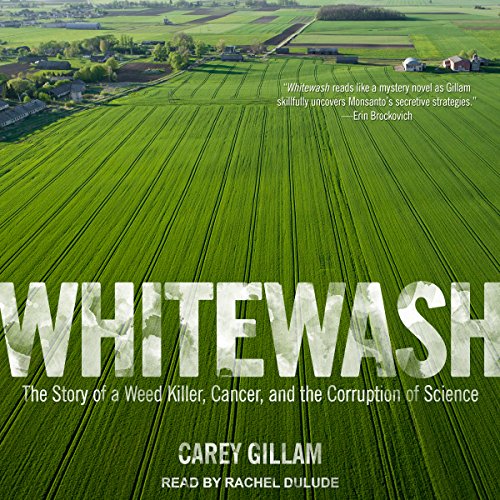 It's the herbicide on our dinner plates, a chemical so pervasive it's in the air we breathe, our water, our soil, and even found increasingly in our own bodies. Known as Monsanto's Roundup by consumers, and as glyphosate by scientists, the world's most popular weed killer is used everywhere from backyard gardens to golf courses to millions of acres of farmland. For decades it's been touted as safe enough to drink, but a growing body of evidence indicates just the opposite, with research tying the chemical to cancers and a host of other health threats.

In Whitewash, veteran journalist Carey Gillam uncovers one of the most controversial stories in the history of food and agriculture, exposing new evidence of corporate influence. Gillam introduces listeners to farm families devastated by cancers which they believe are caused by the chemical, and to scientists whose reputations have been smeared for publishing research that contradicted business interests.

Listeners learn about the arm-twisting of regulators who signed off on the chemical, echoing company assurances of safety even as they permitted higher residues of the herbicide in food and skipped compliance tests. And, in startling detail, Gillam reveals secret industry communications that pull back the curtain on corporate efforts to manipulate public perception.

Whitewash is more than an expose about the hazards of one chemical or even the influence of one company. It's a story of power, politics, and the deadly consequences of putting corporate interests ahead of public safety.

This audio book has pointed me in the direction I was considering as I navigate my way through an existing agricultural business.

Answers for a NHL survivor

I am a cancer survivor, who used round up to kill weeds on my gardens and home regularly. I had developed NHL B CELL diagnosed 06/2019 stage 4. I was given 2 weeks to live a month at best. My husband was desperate to find the cause as he found the cancer the doctors could not find. I had 1 chemotherapy and sent home to die. While I was in Critical intensive care unit, my husband called Dewayne Lee Johnson’s attorney Jennifer Moore who along with Aimee Wagstaff who took my case. Interesting book helped me understand my symptoms and why they are happening.

This is a story of corruption

This must have taken her nearly a decade to compile and write. It is very well researched and thoughtful. It leaves me broken hearted that there are so many people willing to set aside their morals and the greater good for a little power and wealth. Regardless, it is a hopeful story that will leave you contemplating your every swallow and bite.

This book is incredibly well researched and written. One of the most important books of our modern day.

The Top book on this subject brilliant and damning

I have read every book on this subject, so many, I cannot count any more, and seen all the videos and documentaries.

this book is the best of all of them

It is a key element for activists and mothers and action groups who need the evidence of toxicity highlighted and most of all proof of the corruption in the FDA and paid researchers and writers.

We needed this book. it is the most important book to date for our continuing battle with the embodiment of "evil" if there ever was one.
Thank you Carey

This book is a good read and well documented. It’s very concerning and makes a great case for policy changes that need to be made across the board to make healthier soils to grow food healthier plants that will produce healthier produce which will improve human and animal health.

Sensationalist journalism at it's finest

I’ll preface my review by saying I’m a person of science. As humans when illness or misfortune strikes us we search for answers. Yet sporadic or epigenetic interplay in monozygotic twin studies are still underway and the extent of many questions the world has on many issues is yet to be answered.

I persevered throughout the book and the author does a good job of outlining some scary inconsistencies in governance, monitoring, and withholding of information. We do know however that the information of government and that of business does not always represent non-maleficence meaning or accurately reflect science.

However, the constant implied or assertion by the language used deeming correlation and causation as synonyms is incredibly misleading. When individuals whose only qualification is suffering from an illness and stand to gain financially through litigation or concerned mothers and anti-GM groups is presented as credible evidence against robust science then it is sensationalism at its finest.

I have no doubt the truth is probably not as transparent as the company-sponsored, cherry-picked research implies. However this USA centric view fails to recognise the efforts of every other research group, not-for-profit or foreign agency that if unequivocal statistically proven data was available it would be presented to the world's scientific community and stand up to scrutiny; yet it doesn’t.