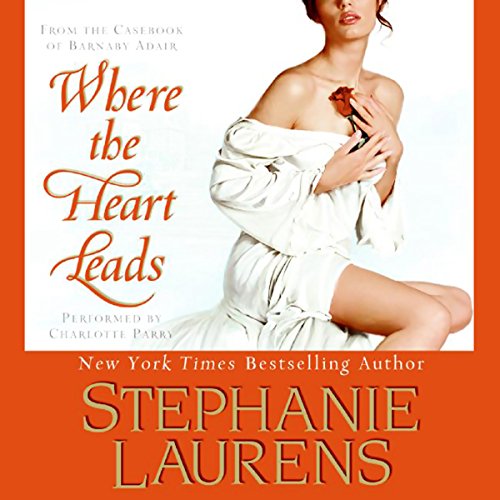 Where the Heart Leads

New York Times best-selling author Stephanie Laurens knows the world of Regency London, especially the exclusive enclave of luxury in which the aristocracy lived in wealth and comfort. But outside that glittering circle lay another world, and Laurens pulls back the curtain that has hidden it from us - until now.

Penelope Ashford, Portia Cynster's younger sister, has grown up with every advantage: wealth, position, and beauty. Yet Penelope is anything but a pretty face in a satin gown. Forceful, willful, and blunt to a fault, she has for years devoted her considerable energy and intelligence to caring for the forgotten orphans of London's sooty and seamier streets.

But now her charges are mysteriously disappearing. Desperate, Penelope turns to the one man she knows who might help her: Barnaby Adair.

Handsome scion of a noble house, Adair has made a name for himself in certain circles where his powers of observation and deduction have seen him solve several serious and unsavory crimes within the town. His pedigree, relentless intelligence, and discretion make him a deadly avenger in an elegant guise. Despite his skills, or perhaps because of them, he makes Penelope distinctly uncomfortable, but the stakes are too grave.

Throwing caution to the wind, defying every rule for unmarried ladies, she appears on his doorstep late one night determined to recruit his talents. Barnaby is intrigued, both by her problem and her. Her bold beauty and undeniable brains make a striking contrast to the usual insipid misses. And as he's in dire need of an excuse to avoid said insipid misses, he accepts her challenge, never dreaming she and it will consume his every waking hour.

Do NOT Buy the Audible Abridged Version

This audio book is abridged. It left out so much of the original story that it made no sense at all. What a waste of money.

I love Stephanie Laurens and this book in its entirety is quite good. I had to get the written full version to understand what the real story is.

With so much left out it was hard to rate performance.

What a waste of money

I love all of Stephanie Lauens books. I have read several of her series, including the Cynsters, Bastion Club and the Black Cobra. This audio does not follow the book, in fact it skips a lot of it. It is so far off I'm really disappointed. If you intend on reading along with the book, don't buy this audio book.

The story is all as it should be for a Stephanie Lauren book. Interesting and good intrigue.

Her performance is good, if so much of the book was not skipped.

Could you see Where the Heart Leads being made into a movie or a TV series? Who should the stars be?

Abridge Failure of Where the Heart Leads

I knew this was an abbreviation , but it was condensed very badly. If you're making major cuts to a mystery make them in the interminable sex scenes , not important events and conversations that made the book so enjoyable. I do want to compliment Ms. Parry's performance, which was quite good.

This is the worst Laurens book I have read. Mystery plot has possibilities, but detectives spend too much time in bed to bother saving kidnapped boys. I found that really offensive.

This was a light, pleasant romance. Penelope and Barnaby were likeable enough, but not all that special. Because of that, when they were together, it didn't have the emotional impact of a good romance. The mystery was also light and really just a plot device to get the main characters together. If you are a big Laurens fan or do enjoy light romance, you may like this one.