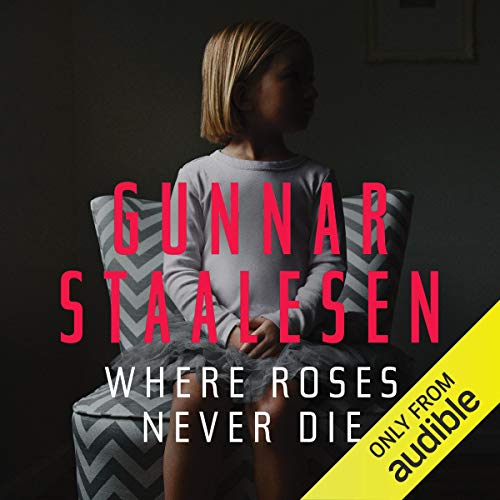 September 1977. Mette Misvãr, a three-year-old girl, disappears without trace from the sandpit outside her home.

Her tiny, close middle-class community in the tranquil suburb of Nordas is devastated, but their enquiries and the police produce nothing. Curtains twitch, suspicions are raised, but Mette is never found.

Almost 25 years later, as the expiry date for the statute of limitations draws near, Mette's mother approaches PI Varg Veum in a last, desperate attempt to find out what happened to her daughter. As Veum starts to dig, he uncovers an intricate web of secrets, lies and shocking events that have been methodically concealed.

When another brutal incident takes place, a pattern begins to emerge.

Chilling, shocking and full of extraordinary twists and turns, Where Roses Never Die reaffirms Gunnar Staalesen as one of the world's foremost thriller writers.

I wish Audible had indicated this book is a second in a series ! It was a good book anyway and the characters (especially main) were worth the time investment. Great Narrator.

This was a well crafted and well performed story. The Norwegian names of the characters and the fact that there were so many characters made it challenging to keep track of the plot. It would be great if Audible could put a cheat sheet on the site with the characters names and their relations to each other.

I gave up on this book at the halfway mark, picked it back up, and then stopped 70% of the way through. It is tedious, the story is repetitive. In his efforts to help a mother find her kidnapped daughter from 30 years back, the detective (also an alcoholic) goes from one person to another asking the same questions and getting nowhere. The plot is stuck in a swamp of never-ending drinking and searching.

This reminds me a bit of a Jane Marpke mystery. In the small world this detective moves in, he simply visits and revisits the small cast of characters until he solves the puzzle. I was surprised at the last chapter solution. The author sets a steady pace and invites the reader to join him in quietly questioning everyone. This is a fascinating book.

This book has a lot of positives but a couple of things kept me from giving it a higher rating. Eliminating even just 1 or 2 of the many coincidences would have made the story much more believable. I also found the (I assume) humorous attempts at retro hard-boiled detective similes about the main character's desire for alcohol just didn't work. The book did keep my interest throughout and the ending was clever.

This story features two cases, separated by time but still bonded together by the thinnest of links. I thoroughly enjoyed the twists and turns, and especially the resolution.

This was my first book by this author , but it will be not the last. How refreshing it was to have relatively complex plots intriguingly unfold & actually intermingle with with minimal predictability . The author did a great job developing the characters, revealing the very delicate, undersides & scars we as humans hold closely . A totally satisfying read with a gracefully executed ending.

Would you listen to Where Roses Never Die again? Why?

I would listen to it again as I enjoyed the flow of the book, the way everyday things were described.

What was one of the most memorable moments of Where Roses Never Die?

I don't want to give anything away, so I will just say that the book was very enjoyable with twists and turns and came together and tied it all off nicely at the end.

I loved this chap's voice and it felt like I was there listening to a lot of different people. Really gets you engaged in the book and plots.

I believe I could, but I needed to sleep unfortunately.

Great listen, I really enjoyed this book. Would highly recommend.

The story sucks you right in!

I'm not sure what specifically made this such a great listen, but that it was! It must've been a combination of great story telling, a compelling mystery and enough twists to keep you guessing til the very end. I listen to this for 2 days straight. Will def look for more books by this author. And Mr Mace was absolutely brilliant in his narration!

Interesting, although not quite as good as I would have hoped. Decent story but kind of drawn out and with out any real kickers or anything exciting happening.