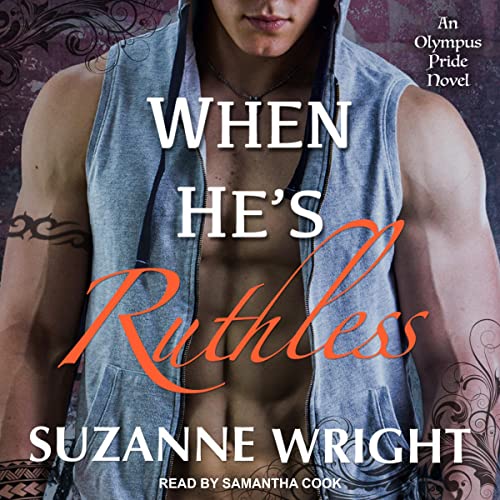 Blair Kendrick was just twelve years old when she stared into slate blue eyes and sensed that her world was about to change. She'd known down to her bones that the broody alpha cat shifter was her true mate. For the past six years, Luke has watched over and supported her. When she turns nineteen in a few months' time, he'll officially claim her and she'll then join his pride. Or that's the plan. Knowing her parents are extremely opposed to it, she isn't surprised when her mother attempts to derail it. But the recent discovery on her porch comes as a shock, forcing Blair to face that she's become the focus of a predator that lurks in the darkness and now intends to close in on her.

Not even the most ruthless of men are without a weakness. Luke Devereaux has only one: a fierce, lethal bush dog shifter who is also his mate. Before Blair, his mind was a place of endless blackness. She gave him purpose, peace, and balance. It's finally nearing the time he can make her his, and he's done playing nice with her interfering parents. But it turns out that they're the least of his problems, because Luke isn't the only one who has been watching and waiting for Blair to grow. There's another who believes he has a claim to her. Someone who has already shown he'll do anything to possess her. Even kill.

Not her usual work, to slow burn

Not her usual work, it's a slow burn but the fire never ignites. I love the Olympus Pride series but this book isn't one I wish to keep, It just didn't capture my attention. Something about the monotone voice of the narrator, just wasn't right. Not sure if there will be more books in the series plenty of characters but not sure where or what characters Suzanne will try to capture. I can't say if it worth the credit, just something wasn't right with the style of her writing.

disappointed kind of a bummer

As a romance reader the "tension, denial, angst, push/pull, and acceptance/submitting" are the exciting parts to me and there are none of those parts in this one. I'll just re-listen to the earlier Suzanne books.

Not sure what bothered me about this book. I have no judgement on the age gap, but the book saying that Luke was overprotective was not quite right. It felt more paternal in the way that he suffocated her. When he wasn't protective, his overly romantic ways didn't have me feeling that he was a bad ass. If he behaved like that sporadically, it would have been heart-melting, but it was overly done.

I honestly lost track of who was who. But that could have been my lack of interest in the story. I will listen again another day, perhaps a different mindset will work.

The narrator- for the love of all things, please replace her. Samantha Cook does bring a story to life, however, it's the timber of her voice that isn't appealing. Her male voices sound like teenagers that are shaky and nervous. I don't know, I think we all got spoiled from Jill Redfield's amazing narration from the previous series.

Why is Blair's inner animal called a "female" instead of dog or Bush dog as in all the other books, it was weird.

Sergei's name was changed to Sergio for this book or is it the narrator that screwed it up? I don't have a hard copy to confirm.

All of SW shifter books have a theme:
Trouble coming from all angles (this book felt repetitive, some wording is even duplicated from previous books)

Dominant female that has an idiotic quirk (seriously- believing in zombies, signs, excessively superstitious, preaching the bible- I'm boycotting Elle's story, I have my limits on crap)

If your dominant, then you don't have a silly fear of finding your mate and falling in love- it's repetive angst just to create tension.

Every female is dominant with the exception of Shaya from Carnal Secrets (and she is a salient submissive- how convenient).

Shouldn't shifters that have lost their mate suffer from touch hunger? How did Luke go six years without sexual touch? Madyson was suffering after six months in Echoes of Fire. Jesse slept with women while waiting for Harley in Force of Temptation, because they "need touch- social and sexual"

I suspend alot of questions in these series so as not to take out the enjoyment, but when that woman at Enigma had touch hunger, I had to ask.

Something different would he nice, but I'm suspecting that Bailey and Deke's story will be the same as "When He's Sinful". Rinse, repeat.

I totally love Suzanne Wright , and OMGOSH the 2 series of the Phoenix and Mercury packs are totally awesome. the complaint I have with this series is the narrator she just doesn't do justice to this series especially the female part . it was the same thing with Alex and Bree it just takes away from the story .

Maybe if I'd never heard of the other series it wouldn't be so bad but to me she makes these women seem, shoot I don't even know how to explain it but I don't like it.

I can't even count how many times I've listened to the Phoenix and Mercury series I love them so much . please Suzanne change the narrator to this series.

As always another great shifter book! I love when she makes great female characters with there own minds and strong personalities! And I love Luke! This was a great read and one I will read again.

Really enjoyed all the characters and story line to each of this books in this series can’t want for Baileys story!

Since the start of this series this narrator has been nerve racking. Her male voices are basically old (80-90) yr old man voice. She also puts In words that aren’t even in the sentence or paragraph. She will say miss spelled words (big fail to the editor) and she says them the way they’re spelled knowing that’s not the word.

She knew she was his since she was twelve

But someone else wants to claim her….
Bush dogs, Pallas cats, a stalker, meddling parents, predestined mates and shifter poachers. This book is jam packed and so much fun to listen to.

I really enjoyed this book. Have been looking forward to it. There was a few mix up on voices but still enjoyable.

Alot, but not enough

This book seemed like a lot but not enough. There were so many side people and it was a little difficult for me to remember who they were. It felt like a series finale but not in a good way. Luke was more tame and watered down than ruthless. I commend Suzanne Wright for being the great author she is and giving her readers so many shifter stories.