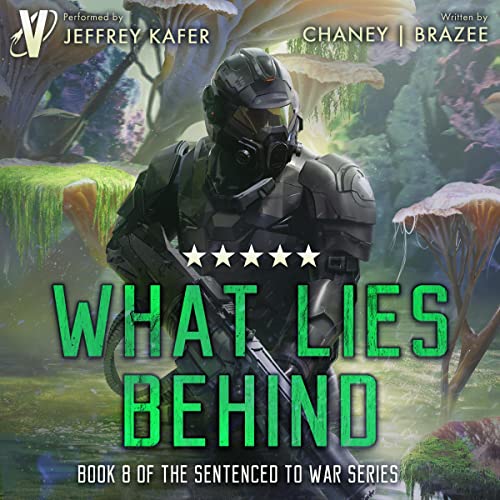 A new alien threat arises. A Galactic War unlike any before it.

A powerful enemy threatens not only humanity, but humankind’s former enemy, the Centaurs. A warrior race, the Naxli, consider themselves the rightful rulers of the galaxy, and all other life should be either enslaved or destroyed. Still, the Naxli are honor bound, only willing to face those who present a worthy challenge. They recognize strength and nothing else, so it is with strength that humanity must fight back.

Faced with an implacable enemy, distrust within his own government, and a deep-seated fear within the populace of augmented soldiers, Rev and his fellow hyper-augments must carefully balance a tightrope if they are going to save humanity against this enemy.

Now is not the time for second guesses, political hyperbole, or weakness. Humanity must stand and fight together or risk losing all that they've gained.

Get ready for a brand-new installment in the best-selling Sentenced to War series from Dragon Award nominees and USA Today best-selling authors J.N. Chaney and Jonathan Brazee. If you're a fan of realistic military scifi and deeply realized characters, this is the book for you.

I am always skeptical of these series. they always leave something lacking but sentenced to war has continued to hit the mark for me. very good future military fiction.

I enjoy this series.

This has been an enjoyable series. Is it the literary genius of Hugh Howey or Nicholas Sansberry Smith? No. However, it is a good story line with good action and well fleshed out characters.

I absolutely love this series. I only wish the booked were longer. This book has an added twist that comes fully together in the epilogue and sets up Rev’s future challenges perfectly. I’m interested to see where this goes and can’t wait for the next release!

he'll of a book

this series keeps getting better and better. I'm chomping at the bit for the next book

This series was amazing. Even though its based in the future you can still understand the tech with how its explained. Each book kept me wanting more and more. I cant wait for the rest of the series to come to audible. If you like military and futuristic books and movies you will like this. I highly recomend. The very begging when Rev gets inscripted is kind of slow. But give a chance and you will be wanting more like a junky needing a fix on the story line....lol

I stuck with it till the end or the end for me. Started great but got to far away from the combat. Missed a lot of interesting ways to go especially the A.I.

The acronym POG has a long O sound, not a short O. It stands for People Other than Grunts

The storyline in this one is on par with the previous installments. If you’ve followed the story thus far, you won’t be disappointed.

The read though… It seems like someone gave Mr. Kafer some bad notes after the last few books. Every sentence is read as though it’s a standalone performance of a Shakespearean sonnet. I swear I kept getting visuals of John wayne or Shatner doing that cringe rendition of Rocketman. It just made the conversation seem stilted, and the narration seem melodramatic.

Not turned off though. I’ll try the next one when I see it available.