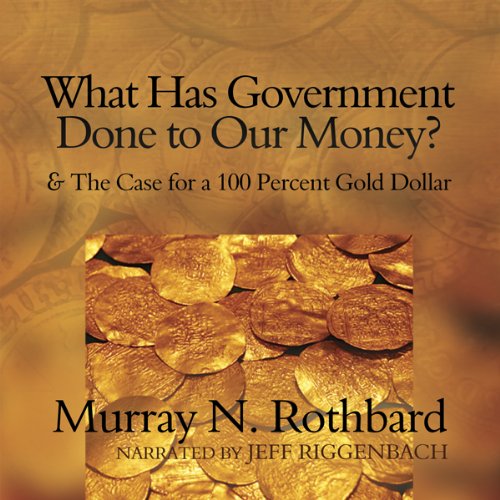 What Has Government Done to Our Money?

The Mises Institute is pleased to present this audio edition of Rothbard's most famous monetary essay - the one that has influenced two generations of economists, investors, and business professionals. The Mises Institute has united this book with its natural complement: a detailed reform proposal for a 100 percent gold dollar. "The Case for a 100 Percent Gold Dollar" was written a decade before the last vestiges of the gold standard were abolished. Rothbard's unique plan for making the dollar sound again still holds up. Some people have said that Rothbard tells us what is wrong with money but not what to do about it. Well, with the addition of this essay, the problem and the answer are united in a comprehensive whole.

After presenting the basics of money and banking theory, Rothbard traces the decline of the dollar from the 18th century to the present and provides lucid critiques of central banking, New Deal monetary policy, Nixonian fiat money, and fixed exchange rates. He also provides a blueprint for a return to a 100 percent reserve gold standard. The book made huge theoretical advances. Rothbard was the first to prove that the government, and only the government, can destroy money on a mass scale, and he showed exactly how they go about this dirty deed. But just as importantly, it is beautifully written. He tells a thrilling story because he loves the subject so much.The passion that Murray Rothbard feels for the topic comes through in the prose and transfers to the reader. Readers become excited about the subject and tell others. Students tell professors. Some, like the great Ron Paul of Texas, have even run for political office after having read it.

Ce que les auditeurs disent de What Has Government Done to Our Money?

Do you think you have the solution to all our political and societal woes?

Shut up. You haven't a clue.

Read this book. Get woke. Save yourself from ignorance.

Worth it's weight in gold

Perhaps I come from a uneducated background but I suspect I'm typical of many middle class kids growing up who never give a thought to economics. A book or two on liberty and changed that and now I can't get enough of economics. Rothbard continues my learning curve with this book filled with a wealth of knowledge.

If you want to know the history of money and what government has done to ruin it, this is the book for you. Makes an excellent case for the abolition of fiat currency and a return to gold as money.

Well written, easy to understand even for an economic novice like myself.

This book really does an excellent job of explaining how money arose and the importance of the gold standard. 10/10 I recommend if you're interested in economics.

This book proposes a compelling argument for the legalization of money in a true free market. I advise every student of the Austrian School to include this book in your reading list!

Rothbard does it again. A great recount of the history of money from the gold standard onward with expert economic analysis from the Austrian school viewpoint.

Riggenbach is a very clear and easy to listen to narrator.

Radical but well augured plan to return to 100% gold standard.

This is a great read to get to understand money: it’s origins, how it behaves in a free economy, how we can return to such a state, and what role gold plays in a sound monetary system.
In 2020 and 2021, where governments have taken it upon themselves to save all of humanity by descending ever further into debt, soon to be followed by outright printing I am sure, understanding money is now more important than ever.

Explains how free markets are the best route to keeping freedom. Show the power over the people when money is created through governments to control the people.

Excellent book. The proposed solution is the only logical solution to the inflation problem. I've already dumped my dollars.