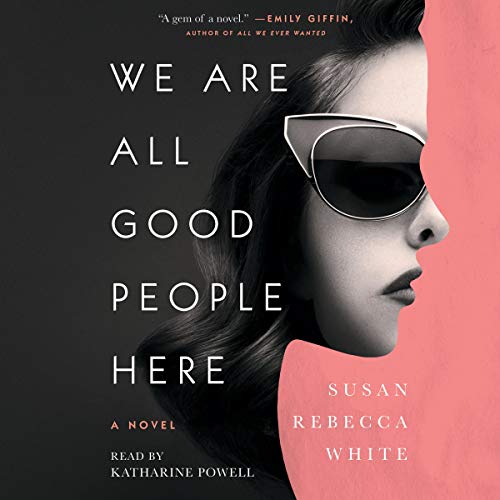 We Are All Good People Here

From the author of A Place at the Table and A Soft Place to Land, a gripping, multigenerational story inspired by true events that follows two best friends through their political awakenings in the turbulent 1960s - and the repercussions of their actions after their daughters encounter the secrets they thought they had buried long ago.

Eve Whalen, privileged child of an old-money Atlanta family, meets Daniella Strum in the fall of 1962, on their first day at Belmont College. Paired as roommates, the two become fast friends. Daniella, raised in Georgetown by a Jewish father and a Methodist mother, has always felt caught between two worlds. But at Belmont, her bond with Eve allows her to finally experience a sense of belonging. That is, until the girls’ expanding awareness of the South’s caste system forces them to question everything they thought they knew about the world and their places in it.

Eve veers toward radicalism - a choice pragmatic Daniella cannot fathom. After a tragedy, Eve returns to Daniella for help in beginning anew, hoping to shed her past. But the past isn’t so easily buried, as Daniella and Eve discover when their daughters are caught up in secrets meant to stay hidden.

Spanning 30 years of American history, from the twilight of Kennedy’s Camelot to the days leading up to Bill Clinton’s election, We Are All Good People Here perfectly resonates with today’s fraught American political zeitgeist and asks us: why do good intentions too often lead to tragic outcomes? Can we separate our political choices and our personal morals? And is it possible to truly bury our former selves and escape our own history?

A powerful story that I assume was biographical as to the second generation of friends. Too bad Simon and Schuster didn’t use a narrator familiar with Atlanta, the city where most of the story takes place. Or at least have the narrator consult with the author on how to pronounce Atlanta landmarks like Ponce de Leon and Manuel’s Tavern. Being an Atlanta native I found this frustrating and distracting. Apart from the words themselves the narrator emphasized words and phrases incorrectly for a southerner and stumbled as she was reading. Perhaps consider picking up a hard copy instead.

Story is ok but the performance suffered

While a fairly entertaining story, it seemed too pat and unrealistic. My biggest bone of contention was that the performer did not research properly the pronunciation of names and places in the Atlanta area. As a native of the area, I found it hard to listen to!

Interesting story of friends over the generations

I was not bothered by the mispronunciation of some Atlanta landmarks like others (yes…have lived in atlanta for 30 years). This story covers racial, gender, religious, and economic inequalities so if you don’t like that…stay away from the book. I actually enjoyed that it challenged some of the ideas I had rooted somewhere in my consciousness from how and where I was raised and provided.

Please choose something else. From college to adulthood these women go through every conceivable experience and I really didn’t care. This book was a complete waste of time!