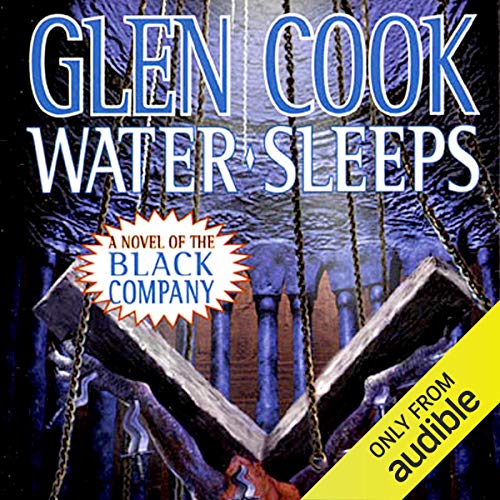 For years, Glen Cook's Black Company series has built a major audience among fantasy fans. Told from the "worm's-eye" view of the soldiers and functionaries who fight in the trenches of vast sorceress wars, this epic has riveted a generation of readers. If the Joseph Heller of Catch-22 were to tell the story of The Lord of the Rings, it might read like the Black Company books. There is nothing else in fantasy like them. Now Cook brings the latest cycle of the Black Company saga to a major climax, as the survivors of the disaster at the end of She is Darkness regroup in Taglios. Determined to free their fellow warriors held in stasis beneath the glittering plain, they journey there under terrible conditions, arriving just in time for a magical conflagration in which the bones of the world will be revealed, the history of the Company unveiled, and new worlds gained and lost...all at a major price. Wry, tough-minded, brilliantly imagined, and told with enormous flair, Water Sleeps is Glen Cook at the top of his game.

Would you try another book from Glen Cook and/or MacLeod Andrews?

Glen Cook is fantastic. MacLeod Andrews has been great with other books, but this one, the recording distracted from his voice acting and the story.

This far into the series, pulled away from the protagonist that started the story, there was a challenge to make the reader care about these people. Glen Cook managed to keep me going, which is saying something.

Lick the roof of your mouth while opening your mouth. Here that popping, clicking sound? The subtle, moist smacking? At almost every pause in the narration, and several times in the middle of sentences, I could hear that sound.

Imagine 18 hours of that sound, and that's what the experience was like listening to this book.

My guess is that the microphone was too close to MacLeod's mouth, or something along those lines. Whatever the reason, it made listening to this book extremely difficult, because it was a constant distraction from the story being told.

Story was amazing per usual.

Performance
While he might not be my favorite Narrator in this series, there is no doubt he is the most talented. His voices for one eye and the new character Suverin(sp?) are amazing works of art.

It had been a while since I had read the Black Company series, and this audible re-introduction was a pure delight. McLeod Andrews is one of the best narrators I have ever had the pleasure of listening to. The sheer dexterity of his voice allowed the diverse characters to fully come to life in this tale.

little drawn out but i still love the characters. was interesting to see how the group stays the same even when there is only one original member from the first story.

Glen Cook did it again! Another dark Masterpiece as haunting as it is imaginative and beautiful!

chew with your mouth closed

Either the microphone just clicks and pops for no reason, or ol' buddy's slobber filled mouth smacks with every sentence's end. Still a good book.

Macleod Andrews is worst reader of the series—he makes a lot of errors that took me out of the story by way of awkward breaks, dry mouth, ambient sounds, and mispronunciations. Also haven’t been a fan of the accent work since Mark Vietor was replaced. Andrews simply cannot distinguish characters without an absurd accent, and his preponderance of Indian-style accents seems uncomfortably exaggerated and even vaguely racist at times. Vietor’s Soul Catcher is so much more vivid and alive than Andrew’s Protector—it’s painful at times. Same goes for the ongoing Scottish brogue of One-Eye—previous narrator’s misstep that stays & remains the most nonsensical artist choice of the series. Still this is the best story of the Glittering Stone series so far, so the quality of the narrative overcomes the shortcomings of the narrator. Easily the best story since Shadows Linger, and a much more deft handling of a woman-centered fantasy narrative than Dreams of Steel. I only wish Rachel Butera or someone with her abilities had been brought back for this one.

MacLeod Andrews is a narration genius

Mr. Andrews brought this book to life possibly better than many readers I have listened to in over 100 titles on Audible. This is another great addition to the Black Company. I am anxious to complete the series, but alas only one book remains.