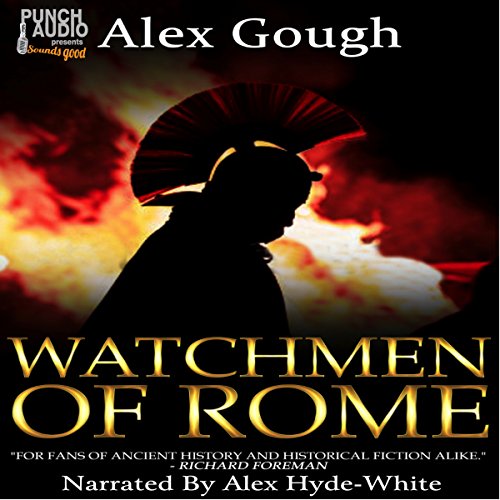 Rome, AD 27 - Gaius Valerius Carbo has returned to the heart of the empire after 25 years of serving in the legions. He just wants to retire in peace. But his friends are gone, his family is dead, and his home now belongs to someone else. When local thugs attack the tavern where he is resting, he finds himself caught up in the fight and inadvertently becomes the new owner of the building - and the enemies that come with it.

His world is turned upside down when he is confronted with a face from his past. He had sworn to protect and look after his childhood friend, Rufa, after her father died alongside him in battle. But now she has been sold into slavery and is on the run from her mistress, Elissa. Elissa is a powerful priestess who is organizing a cult to try and destroy Rome from within. Can Carbo protect Rufa - and Rome - from Elissa's evil plan? Or, will her following be too strong for the watchmen of Rome?

This is Alex Gough’s first historical novel. The book takes place during the reign of Tiberius. Our protagonist is Pilus Prior Centurion Carbo who has just returned to Rome after 25 years in the Legions. A neighhood protection gang shakes down a tavern Carbo is eating in so he buys it. Elissa is a Priestess of the Carthaginian deities Baal-Hammon and Tanit; she plans to destroy Rome to avenge Carthage. She plans to sacrifice a child to launch her plans on Rome. The slave mother and child run away and seek protection from Carbo. Carbo has become friends with Lucius Vedius Vespillo, Tribune of the Vigiles. The Vigiles are an organization founded by Augustus for the purpose of maintaining fire safety, firefighting and law enforcement. They are the lowest rung of the Roman military/police system. Carbo must fight the protection gang and save Rome from destruction. It makes an action packed suspenseful story.

The book is well written and the characters’ development is excellent. The descriptions bring the city to life including the smell and filth. I enjoyed the fact the people in the story are of the lower classes, including freedmen and slaves. So many stories are written about just the upper classes. Gough is an excellent story teller. I am looking forward to more books by him. Alex Hyde-White did an excellent job narrating the story. From reading this book I have gained a new author and narrator to follow.

Would you consider the audio edition of Watchmen of Rome to be better than the print version?

Yes, I love to listen to great readers. I listen to the books while I walk our trails.

Carbo is a great character because he has his weaknesses, but he is basically a good man with a sense of justice.

There is a wonderful scene when Carbo has to confront gang members in a tavern.

It made me hope that there would be more books with the same main character.

The history of this period is very good. Rome was full of gangs and also veterans who would have had some sense of honor and would have clashed with the gangs.. The premise of the story is excellent.

A good historical fiction. It portrays Roman life in the 1st Century CE while telling an enjoyable tale. The characters were easy to like or hate and story had a lot of action. Enjoyed this audiobook.

love the different pov you get here as compared to the cliche roman books- not the biggest fan of the ending (s) too much good fortune too many times for it to seen realistic... great book otherwise!