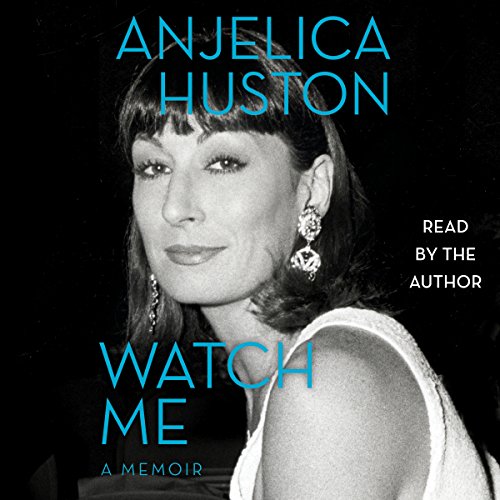 Watch Me: A Memoir

Following her "extraordinary" ( Vanity Fair), "evocative" ( The New York Times), "magically beautiful" ( The Boston Globe), "gorgeously written" ( O, The Oprah Magazine) coming-of-age memoir, Academy Award-winning actress Anjelica Huston writes about her relationship with Jack Nicholson, her rise to stardom, her work with the greatest directors in Hollywood, her love affair with her husband, and much more.

Anjelica Huston was 29 years old and trying to create a place for herself as an actress in Hollywood when the director Tony Richardson said to her: "Poor little you. So much talent and so little to show for it. You’re never going to do anything with your life." Tony had a singsong voice, like one of his own parrots, but there was no mistaking the edge. "Perhaps you’re right,” I answered. Inside I was thinking, Watch me."

In A Story Lately Told, Anjelica Huston described her enchanted childhood in Ireland and her glamorous but troubled late teens in London. That memoir of her early years ended when Anjelica stepped into Hollywood. In Watch Me, Huston tells the story of falling in love with Jack Nicholson and her adventurous, turbulent, high-profile, spirited 17-year relationship with him and his intoxicating circle of friends. She writes about learning the art and craft of acting, about her Academy Award-winning portrayal of Maerose Prizzi in Prizzi’s Honor, about her roles as Morticia Addams in the Addams Family films, Etheline Tenenbaum in The Royal Tenenbaums and Lilly Dillon in The Grifters, and about her collaborations with many great directors, including Woody Allen, Wes Anderson, Bob Rafelson, Francis Ford Coppola, and Stephen Frears. She movingly and beautifully writes about the death of her father, the legendary director John Huston, and her marriage to sculptor Robert Graham. She is candid, mischievous, warm, passionate, funny, and a superb storyteller.

Fascinating woman. Love stories? Not so much.

I’ve always been fascinated by Anjelica Huston. She has always struck me as being unique. Not a classic beauty, she’s always had an otherworldly beauty that radiates from within. I believe that’s why I was so disappointed to see that she allowed herself to be used by that infamous actor love of hers. It was disheartening to realize that Anjelica didn’t place more value on her worth. Every time she discovered another infidelity, she stayed on for more. He wasn’t worth it. I don’t care how fascinating, engaging, or unique any individual is. A narcissist is a narcissist and she was used by a man who didn’t value her love or loyalty. Hearing this first hand was painful. I don’t think this is something to celebrate or memorialize. It left me feeling demoralized for her.

I have to say that I was also disappointed that this memoir didn't really relate more details of her relationship with her late husband. This relationship was relegated to the last few chapters. From her narrative, I was left thinking that perhaps it wasn't as substantive as I originally thought but, then again, how much do we really know about people who are famous? Actually, I think this is what is at the crux of my disappointment with this memoir. I was looking forward to knowing more about Anjelica. Her stories didn't convey the intimacy (within reason) of who SHE is. Instead, I heard more about all the famous and industry people she new. It was an endless avalanche of name dropping. I was constantly trying to remember who everyone was. Connecting the stories she told was frustrating. It was a pattern of drop a few names, tell a story or anecdote, the move on to the next one that had nothing to do with the previous. Very confusing.

In summary, my opinion of Ms. Huston hasn't changed. She is still fascinating, just not much of a story teller. I wish I had learned more about her through her memoir.

A Portrait Of The Last Great Hollywood Generation

Written in vignettes, both guarded and wise. Anjelica isn't so much introspective as a great observer of life around her, and fills the memoir with lovely imagery and observations that can only come from Irish Storyteller blood. There is much heartbreak and loss as the generations pass, but also hope in the family's children. The memories of Robert Graham are especially moving and brought me to tears on several occasions. Here is a time capsule of the Hollywood Elite of the 70s and 80s, as well as a portrait of an insecure but privileged girl who finally finds her voice, strength, beauty and gratitude.

Who knew? Turns out Anjelica Huston runs deep- she's a more-than-able writer, and seems to be an excellent human being to boot. Kind, thoughtful, & measured, this memoir held me rapt. Beautiful evocations of natural landscapes (especially Ireland) run throughout. Huston also details the gentler side of her dad convincingly. And what a life she's had! Such a wide array of lovers, homes, roles- all experienced in very posh circumstances. Great read.

Anjelica certainly read this with a great deal of passion and sincerity. so interesting to get a behind the curtain View some early life events that have played large across the stage.

I really enjoyed reading this book. The author has great writing skills and had an excellent way to describe the great loves of her life.

I chose this book because like a lot of you I have always liked Anjelica Houston. Like that Diane lane thing, she has always been an actress women can relate to. She has a way of coming across as soft. Sexy and Sophisticated and mostly like someone you could approach
I loved this book. Too many icons she
Speaks of to name but her relationship with jack is
Laid bare and it left me feeling better to have known the whole story
She is a daddy’s girl and we have a love of horses in common.
Icon is the only word that comes to mind
I was dazzled and amazed

Between her amazing voice and amazing life, tenderly and thoughtfully remembered my heart was both uplifted and broken many times over reading this book. Although I don't want to suggest it isn't also raucously funny and full of adventure too, indeed I laughed a huge deal. Highly recommend!!

Could she be any less engaged in her own story?

While I did listen to the entire book I cannot say that had I known what it would be like, I might have passed on it.

Would you be willing to try another one of Anjelica Huston’s performances?

No, this was terrible. She was reading a book, not telling me a story about her life. I was very disappointed in how she delivered her message. She sounded bored with her own life, and made me bored with it, too.

Could you see Watch Me: A Memoir being made into a movie or a TV series? Who should the stars be?

No, her life is not that interesting.

Do not waste your time

What disappointed you about Watch Me: A Memoir?

the boring story, and the narrator

Would you ever listen to anything by Anjelica Huston again?

Who would you have cast as narrator instead of Anjelica Huston?

If you could play editor, what scene or scenes would you have cut from Watch Me: A Memoir?

to be honest, I do not think the book was worthy of being a book

I thought she would be a better writer.

I found this memoir to be lacking in writing chops, word usage and just plain…I thought she would be smarter. Too much who's who in her hollywood world. I expected her to spend more time on an intellectual life and what she thought about the world and her place in it. No. More of a boyfriend journal. She is kind of a poor lucky rich girl. Not interesting at all.