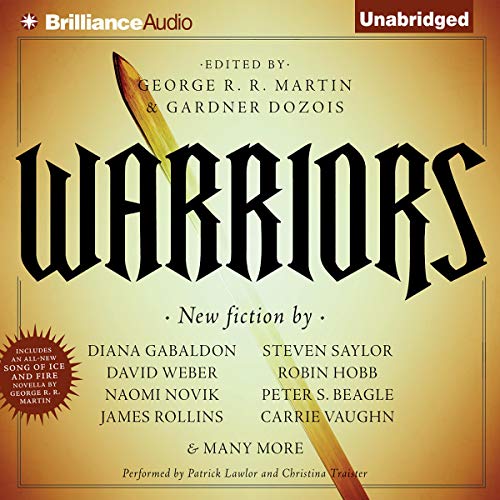 People have been telling stories about warriors for as long as they have been telling stories. Since Homer first sang of the wrath of Achilles and the ancient Sumerians set down their tales of Gilgamesh, warriors, soldiers, and fighters have fascinated us; they are a part of every culture, every literary tradition, every genre. All Quiet on the Western Front, From Here to Eternity, and The Red Badge of Courage have become part of our literary canon, taught in classrooms all around the country and the world.

Our contributors make up an all-star lineup of award-winning and best-selling writers, representing a dozen different publishers and as many genres. We asked each of them for the same thing: a story about a warrior. Some chose to write in the genre they’re best known for. Some decided to try something different. You will find warriors of every shape, size, and color here, warriors from every epoch of human history, from yesterday and today and tomorrow, and from worlds that never were. Some of the stories will make you sad, some will make you laugh, and many will keep you on the edge of your seat.

Many of these writers are best sellers. All of them are storytellers of the highest quality. Together they make a volume of unforgettable listening.

What did you love best about Warriors?

The stories were all very good and varied, that's what anthologies are.

What about Patrick Lawlor and Christina Traister ’s performance did you like?

Both narrators are fine. The fact that all these other reviewers commented on the poor quality of the narration took me by surprise... there are some terrible narrators out there, but these two are just fine.

There are 20 stories, if you expect to like all of them then you are a little high maintenance and you must spend most of your life very disappointed. I found the anthology very interesting and it gave me some insight into authors I will want to investigate further in the future. Money well spent in my opinion.

A table of contents so I can find the story I want to listen to without having to listen to the beginning of every chapter.

The book has an interesting variety of sci-fi, fantasy & horror short stories or novellas. The narrator is appropriate in some stories but dismal in others. His narration of Diana Gabaldon's Lord John is really poor, the British accent actually comes and goes throughout the story.The book would have been much richer to the ear if each story had an appropriate narrator chosen. The transition between stories would have been obvious and each set of characters could have been enjoyed more fully.It is still worth the time & money, it provides many hours of listening to some great authors.

A cast of narrators.

no. Nice to listen to different stories.

Many of the stories are over two and a half or three and a half hours, the better ones are. I found the stories by S.M. Sterling, David Weber, Robbin Hobb, Joe Halderman, David Morrell, Robert Silverberg, Diana Gabaldon, and George R.R. Martin, I found to be excellent. The rest are good and I personally found only two that I truly didn't care for. That is personal taste. There is very different and diversified views of "War" and "Warriors" (taking into mind what is the definition of each).I found that for the cost, there were many hours of pleasurable listening for me. If you enjoy a wide verity of Si-Fi and Fantasy/Horror this may be something you will enjoy. If you are looking for a unique mix I think you will enjoy this. If you see a name like Diana Gabaldon and think it will be all like her work, leave it be, you'll be disappointed. I enjoy her work, but I like Silverberg, Hobb and Martin too. .

I Bought This For One Story

I really should explain why I have given two stars. I purchased this audiobook for the short story "The Custom of the Army" by Diana Gabaldon. It is about Lord John Gray, a minor character from her tremendously successful "Outlander" series. Ms. Gabaldon created a spin-off series of novels and short stories with Lord John as the main character. These belong more to the mystery genre and tie in somewhat with the "Outlander" series (which is straight historical fiction), containing some great background information about its main character, Jamie Fraser. So it really behooves readers interested in both series of books to read/listen to all of the Lord John novels and short stories in order to understand more about Lord John, his life, and his relationship to the characters in the "Outlander" series. Ms. Gabaldon is quite clever and has written both series in a way that entwines Lord John and the Frasers and keeps her loyal readers anxiously awaiting every new story she writes.

That said, I was disappointed in the narrator, Patrick Lawlor. All of the other Lord John audiobooks have been narrated by Jeff Woodman, to whom I have grown accustomed. It was a bit distracting to listen to a Lord John story read by an American narrator with a dismal English accent.

Not the right narrator for the book

I didn't listen to every story in the book, because I was too distracted by the narrator. He was talented, but just not the right person for the book. It is hard to explain exactly what was wrong about his voice, but it was awkward hearing him talk about mature topics. He should limit his narrating to young adult books, and some nonfiction.

I liked some of the stories I listened to. Others were forgettable. I would recommend reading it instead of listening.

Sorry, I can't get past the reader

I can not get past narrator, Patrick Lawlor. I wanted this book for the Lord John story by Diana Gabaldon. All of the other Lord John audio books have been narrated by Jeff Woodman - I found the Lord John books before I found Jamie Fraser, and enjoyed Jeff Woodman???s way of presenting the story - he has such energy and fits the part so well he made Lord John come to life for me - I love his voice and his style. I started the first story in Warriors and after struggling through it, I stopped and went on to something else. I tried again and listened to one more story and it was just painful to listen to. I have finally picked it up again and listened to two more stories, but I am not enjoying one minute. I plan to buy the book so I can read the Lord John story. I don't want to have this narrator's voice in my mind when I think of Lord John - I will just have to imagine through reading instead of listening. For me, this audio book did not work - awful awful reader. He is not a fit for any type of Warrior story. What a waste of a credit for me. I thought I might get used to the reader, but I can???t do it - I just can???t bring myself to listen to any more of this. I listen to dozens of books each year. Some readers don???t help the story, but this is first one that ruined it to the point of giving up on the whole book.

This is an eclectic group of stories about warriors. I enjoyed most of them. I have had occasion to hear this narrator before in the book "Rally Cry." He ruined that one for me too.

Only old farts like me will probably get the title, a reference to a classic B Movie called Warriors. Probably the only Warriors not included in this collection would be gang bangers.

It is hard for an anthology to get a high rating as it usually only takes one bad story to bring the whole rating down. If you are looking for that one good story, then this is an excellent collection. Most of these stories are over an hour long. There are twenty stories and the book is over 31 hours long. Some are shorter and the one by Martin is three and a half hours long. I was a little worried when I started the book, as usually anthologies start with one of there best stories, and this started with one of it's weakest stories. I would suggest that after ten minutes you are not enjoying the story, fast forward, there will be some great stories later. I also like this type of collection, as I got to hear from authors I have never heard from before. The Best story was from Lawrence Block and he writes in a genre a rarely read in. He has a new fan now and I will be seeking his writings out.

By the reviews a lot of people got this book for many different authors. I can only speak to my own tastes. I really liked the stories by Lawrence Block, Joe R. Lansdale, Robert Silverberg, Tad Williams and Joe Haldeman. The stories by Novik, Rollins, Ball, and Vaughn are pretty good. Stories by Hobb, Saylor, Weber, Morrell and Martin are okay.

Block's story is the most unique and scary in today's world. Lansdale's story is very funny. Williams and Haldeman's stories are furturistic, with Haldeman revisiting Forever Peace and focusing on sex. Rollins' story is about dog fighting. Martin continues the adventures of the Hedge Knight, which he started in Silverberg's Legend series.

If you like anthologies and Fantasy, then you will love Silverberg's Legend stories.

I first heard the narrator Lawlor, doing Jack Vance's Dying Earth book. He was good in that, as it involved elves, wizards and fairies. Whoever thought his little boy scout voice would be good doing Vikings or any tough guy, needs to find a new career. By reading the reviews you can tell he ruined it for many. I found it distracting and do believe I would have enjoyed reading the book better. The problem being it would have taken me months to read it, audible, even bad audible works so much better for me, especially long works like this.

Being a fan of short stories and fantasy/sci-fi, I really wanted to like this book. Two things thwarted me in that goal: the editor made an executive decision to include stories from many different genres (to be fair, this could be a positive for some readers), and the male narrator Patrick Lawlor has an annoying, sing-song narration with a limited range of voices.

If you are a Martin Song of Ice and Fire fan like me, it may be worth a credit to listen to one great story if you can get over Lawlor's irritating voice. Unfortunately, that story was the only one that wowed me.